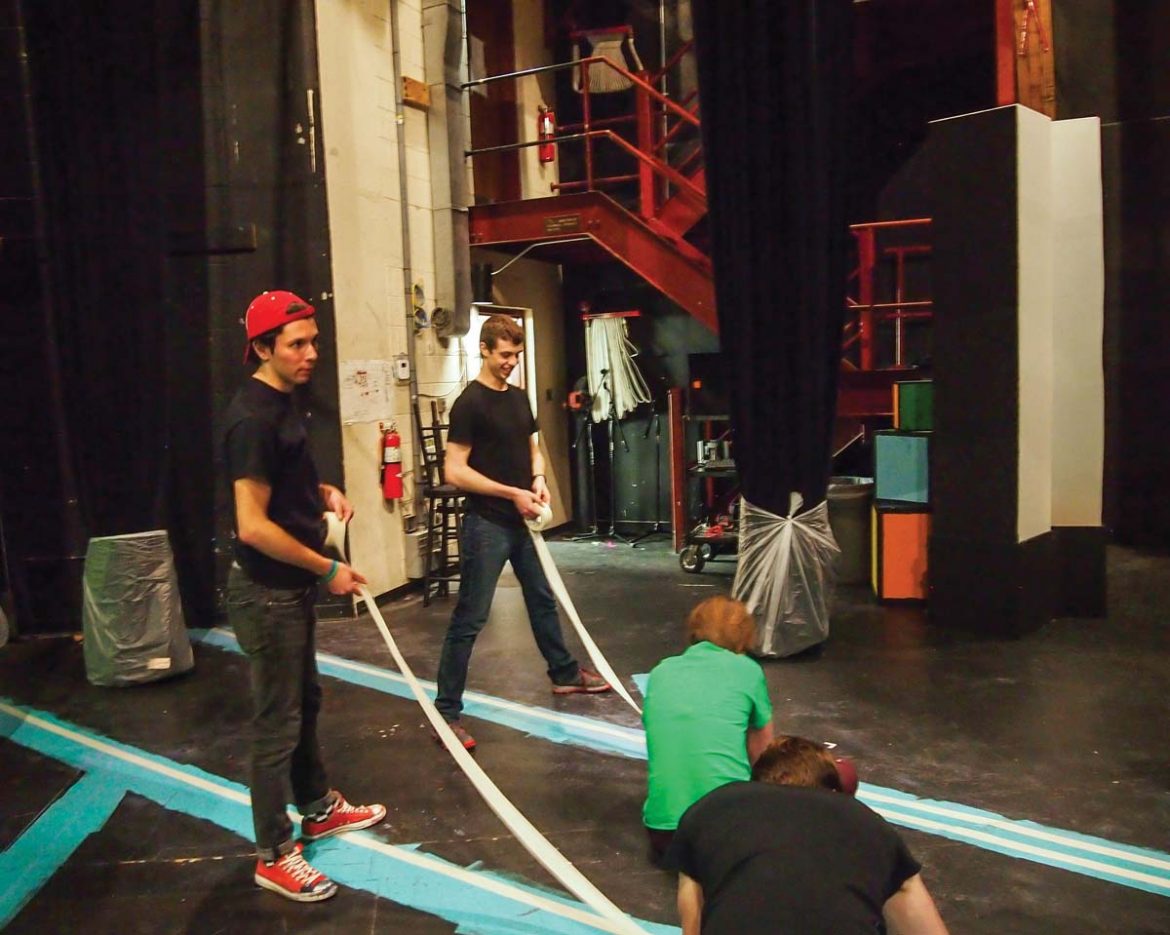 While thousands of students have spent the last few months preparing for their moments on the Benson stage in this year’s “Retro-bution” Spring Sing show, the Harding Department of Theatre’s build crew is looking forward to seeing their behind-the-scenes work come to life. Assistant Technical Director Seth Fish has led the group as they built the set, painted the stage and prepared to help hosts, ensemble and club acts on and off stage for the weekend’s upcoming performances.

According to Fish, although the tangible work toward bringing the show’s set to fruition was accomplished within the past month, the planning and design of the project has been a much longer process.

“Our responsibility is to make sure that all of the physical pieces work together on the stage,” Fish said. “We’ve been physically working on Spring Sing for about four weeks, but there’s been a lot of planning and preparation going on for months now.”

Junior Hannah Reimert, a member of the build crew, said that working on other shows during the semester has made the building process for Spring Sing a challenging one.

“We’ve already had two productions this semester in the theatre department, and we had to build both of those (sets), so it’s been a really tight turnaround,” Reimert said. “It’s hard, but it’s a good hard.”

Reimert said that the group understands that it may not get credit for its hard work but that the members of the build crew see the show as another opportunity to serve.

“We are here to serve the show as a whole,” Reimert said. “Unfortunately the backstage parts of the job are not necessarily what the audience comes to see, but it’s still really cool to be able to serve the performers in a way that not many people know about.”

Senior Jacob Tomlinson, the master carpenter, said the group is rewarded not by recognition, but by having the opportunity to work and build relationships with everyone else involved in the show.

“You don’t get a lot of recognition, but whenever your head’s in the right place, you don’t really aim for that because you have the experience of working with these great people,” Tomlinson said. “Throughout Spring Sing you get to see the clubs gradually get to their top potential and hear their success and the roaring of the crowds…to me the biggest satisfaction is to see them succeed.”

As for the set itself, Tomlinson said he is most excited about the bright colors and lighting for this year’s Spring Sing stage.

“We have some creative painting and lighting techniques to really make the stage pop through practical effects, which is something I think we really have a talent for,” Tomlinson said. “What you can see out front are the Rubik’s Cubes, and that color scheme plays into the rest of the set.”

The build crew will take on its final role as Harding welcomes thousands of visitors to campus for Spring Sing 2016. For Reimert, being a part of entertaining those guests makes the hard work worthwhile.

“It’s really cool to see the thousands of people who come to see Spring Sing,” Reimert said. “Families come, alumni come — people talk about Spring Sing for years after, and just to know you had a hand in making all of that even possible — that’s really rewarding.”

Four male hosts take audiences back to the ’80s