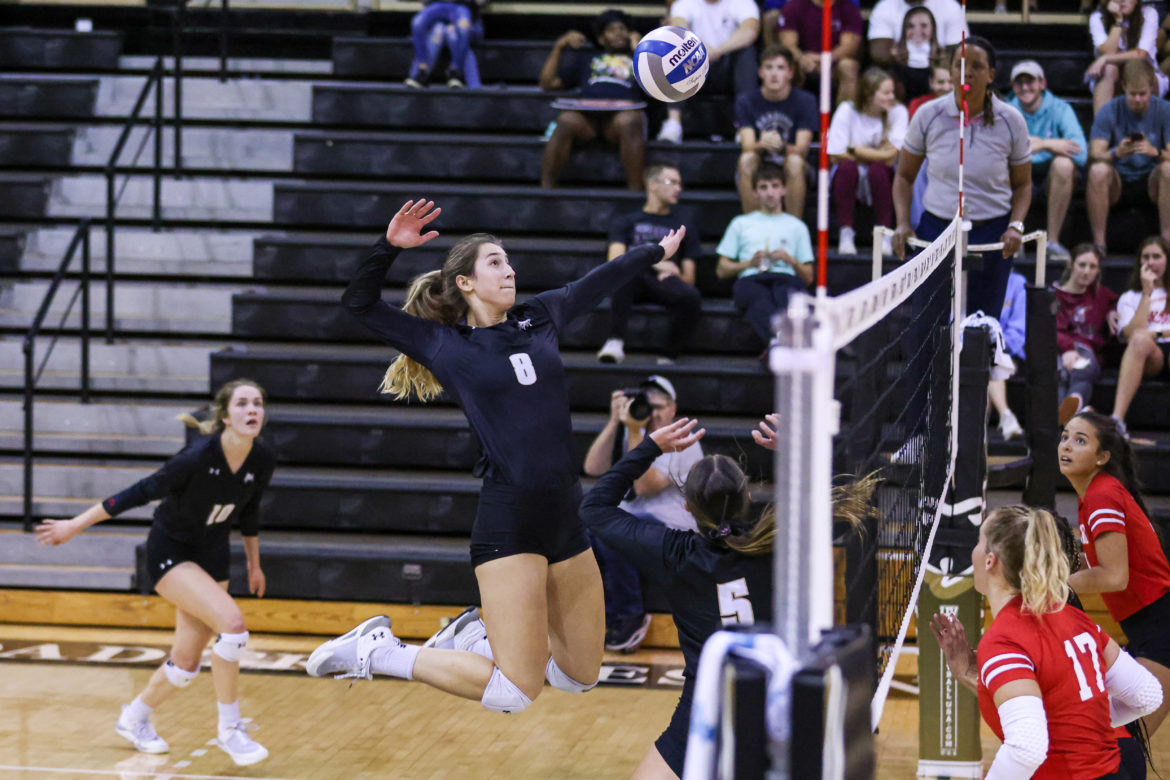 The Lady Bisons volleyball team set a school record of 18 straight wins with their defeat of the Southwestern Oklahoma State University Bulldogs 3-1 (23-25, 25-23, 25-20, 25-16) on Oct. 7. The team continued to hold on to their first rank in the Great American Conference (GAC) with an undefeated record in conference play and at home. With the win against the Bulldogs, the Lady Bisons moved to an overall record of 20-1.

The 18-game winning streak broke the previous record of 17 that had been accomplished by both the 2002 and 2005 teams.

Much of the Lady Bisons’ success this season can be attributed to the nine seniors returning to the team. Head Coach Meredith Fear said the class’s experience brought the team confidence going into this season.

“We knew with so many returners that we could hit the ground running,” Fear said. “We didn’t have to spend a whole lot of time learning our system or getting used to the team chemistry; that was all very established.”

Senior outside hitter Chloe Ingersoll said the senior class has stepped up as leaders not just in gameplay, but also in practice.

“For our senior season, we’re trying to be super present,” Ingersoll said. “I’ve seen the positivity on and off the court, and we’re all holding each other to a character accountability, not just playing accountability.”

Along with word spreading of the Lady Bisons remarkable record, the team has worked to bring fans in with themed games or special events. The team hosted both a teacher night and a youth night in the Rhodes-Reaves Field House this past weekend.

The Lady Bisons traveled to Oklahoma yesterday for a game at Oklahoma Baptist University, which is ranked second in the GAC. Today at 4 p.m. the team visits Southern Nazarene University.

The next home game will be held Oct. 25 against Ouachita Baptist University, when the team will be hosting a “Heart of Howie” night to honor former student-athlete and coach Molly Howard-Gerwig, who died on Oct. 16, 2021, following a short battle with colon cancer.

Fear said she hopes the team will use the momentum they have built up this season but also make sure they are slowing down and playing one point at a time.

“Our approach is that we have a confidence that we can beat everybody that we play,” Fear said. “But we also have the respect that we can be beaten by anybody that we play. I think finding the balance between those two things — of coming in confident but keeping the pressure on the other team and not on ourselves — is what we’re trying to do.”

Freshman defensive specialist Camdyn Hinton echoed her coach’s sentiment as she looked forward to the rest of the season, including the conference tournament.

“Something that Coach Fear preaches is that just because we have a good record doesn’t mean we can’t go in and not expect a battle,” Hinton said. “Every team we play in the GAC is so talented in their own way, so we have to be prepared.”