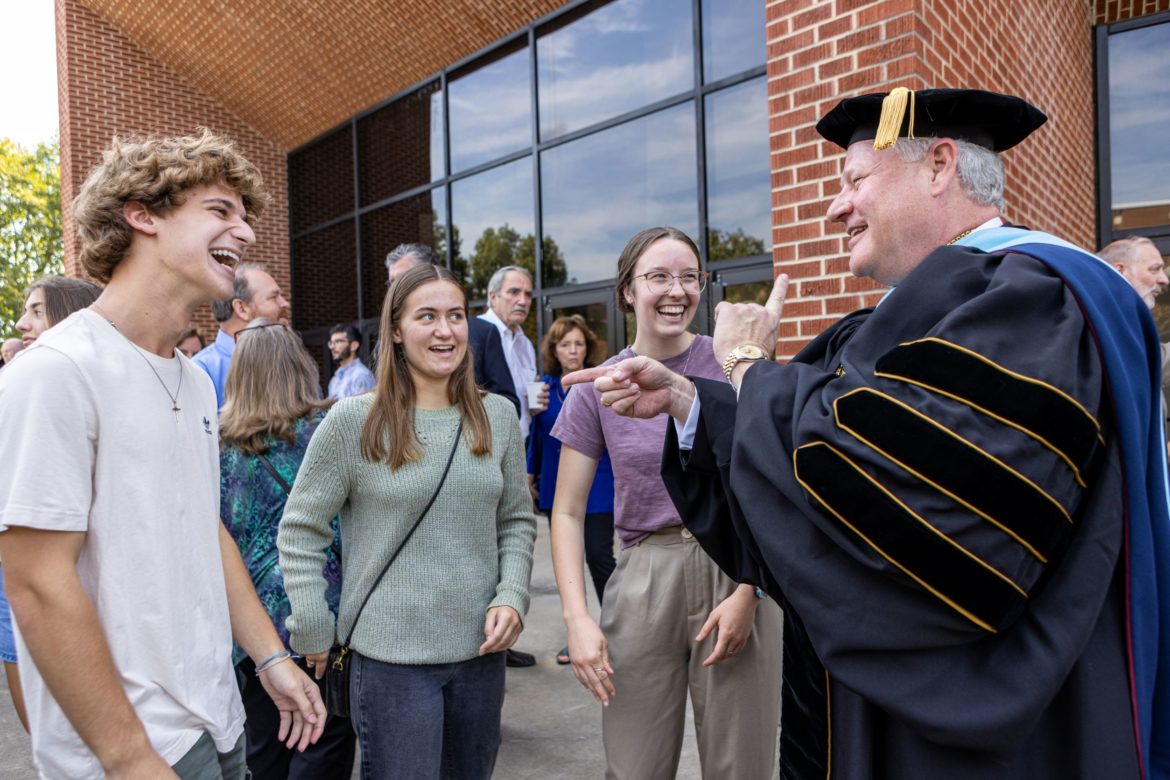 Harding University inaugurated Mike Williams as president on Sept. 16 as a culmination of a series of events celebrating the beginning of his presidency and also marked the start of a new chapter in Harding history.

During his inaugural speech, Williams revealed the University’s new motto, “Inspired Purpose,” which in an email Williams explained that the meaning of the motto “aspires to create the world God intended from the beginning.”

The inauguration celebration was a focus on Harding’s history, Candice Moore, assistant vice president of university marketing and communications, said. Many of the speaker’s themes focused on how Harding came into being, the changes it experienced, race relations, the institution’s future and unification.

Moore said inaugurations are rare events because in Harding’s nearly 100 years of operation, there have only been five previous presidents.

“It [was] an exciting opportunity to hear from our new president and express gratitude for our heritage and hope for a bright future,” Moore said.

The two-day celebration began with a legacy torch relay. Members of the Harding cross-country team ran from Morrilton, Arkansas, to campus along back roads.

“The Legacy Relay is an active symbol of the Harding story,” Williams said. “Just as pioneers of the Christian education passed the torch onto the next generation, this relay began in Morrilton, Arkansas, at Harding’s original campus, and students helped recreate the story of our history as they ran to Searcy.”

“We just wanted to be a part of it,” senior Jackson Pruim, captain of the cross-country team, said. “We were excited for a new president, and we wanted to have our own little footprint on the history of Harding.”

Junior Tiag Campney said the relay was a cool experience because he was able to run part of the original route from Morrilton to Searcy, and he was able to see the University’s changes from its beginning to its present state.

“It was kind of a humbling thing just to view it with my own eyes and see where it started,” Campney said.

“The torch, the torch of inspired purpose, has been passed onto us,” Williams said. “Each generation has faithfully carried the vision up till now, but this, this is our moment. This is our moment to carry the torch together.”

Williams, the sixth president of the University, previously served as president of Faulkner University from 2015-22 (a Church of Christ affiliate in Montgomery, Alabama). Prior to his Faulker presidency, Williams worked at Harding for 28 years — from 1987-2003 in admissions and enrollment management. Following, he spent 12 years as vice president of advancement.

Williams began a presidential tour across the South Tuesday, Sept. 20, in Dallas. Various cities will be visited during the tour, ending in Little Rock on Nov. 17. Williams will open Lectureship this Sunday at 7 p.m. in his first speaking engagement since the inauguration.