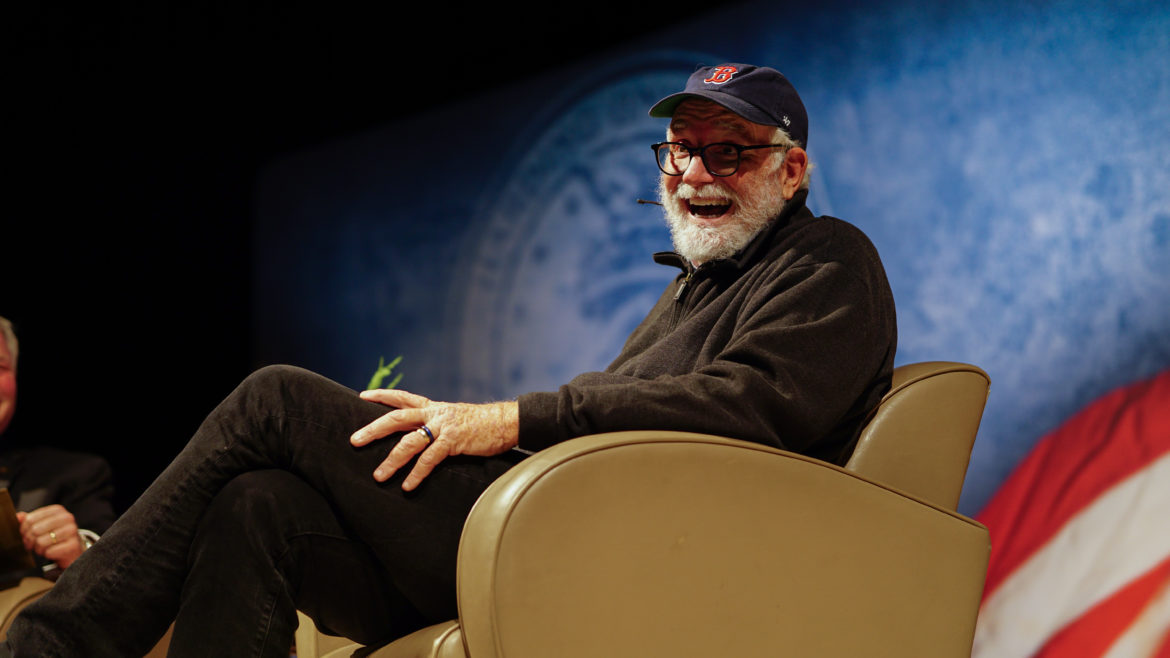 The Harding University American Studies Institute (ASI) concluded its distinguished lecture series for the semester on Tuesday, Nov. 29, with Bob Goff, who spoke on the idea of being “undistracted in business and life” in Benson Auditorium.

Goff is well known for his New York Times best selling books, “Love Does” and “Everybody Always.” He is also an attorney, the honorary consul of Uganda and the founder of the nonprofit “Love Does.” Goff’s humor and joyful spirit set the tone for the lecture as he connected scripture to storytelling.

Goff said people knowing what they want and deciding why they want it keeps them from being distracted. He said it’s not selfish for people to know what they want, but it is strategic because they are focused.

Goff repeatedly compared the aroma of Christ to smelling cookies in the oven, that one’s influence on people is love. He said he could sense this in the people at Harding when he arrived.

“I want people to be near you and sense there’s something about you, there’s a depth, there’s a sincerity, there’s a vulnerability, there’s an awareness of what’s going on,” Goff said. “And that comes from not being distracted.”

“This idea of love just to not have an agenda, when love has an agenda it isn’t love anymore, it’s a program,” Goff said. “Faith ain’t a program. Faith is showing up, knowing what you want, taking an interest in other people and doing something about it.”

A friend and neighbor of Goff’s was dying of cancer and was too weak to attend their neighborhood’s New Year’s Day parade. So they changed the parade route to pass through her front yard for the neighbors to walk through and wave goodbye.

“This is what it feels like to love your neighbor,” Goff said, referencing Mark 12.

On Tuesday afternoon, Goff spoke in a classroom session for students. ASI leaders held a reception and dinner following the session. Goff spoke in chapel the following morning about immense patience mentioned in 1 Timothy. He shared many more stories about his travels to foreign countries, his experiences working with prisoners and memories with his wife and family.

Senior Ella Horton, a member of the ASI officer council, has been a part of ASI since her freshman year. She was particularly excited to welcome Goff to campus and listen to him speak.

“I think that he is interesting to a lot of audiences and has a lot of wisdom to share that’s very applicable to everyone, not just a certain demographic,” Horton said.

Dr. Ross Cochran, professor of Bible, had read two of Goff’s books and had heard him speak before. He said it was great for ASI to invite Goff as ASI focuses on intersecting faith and civic life.
“I think [Goff] loves in creative ways,” Cochran said. “I think we get stuck in our well worn ways of loving. Sometimes the best response, the one that lands the best, has an element of surprise.”