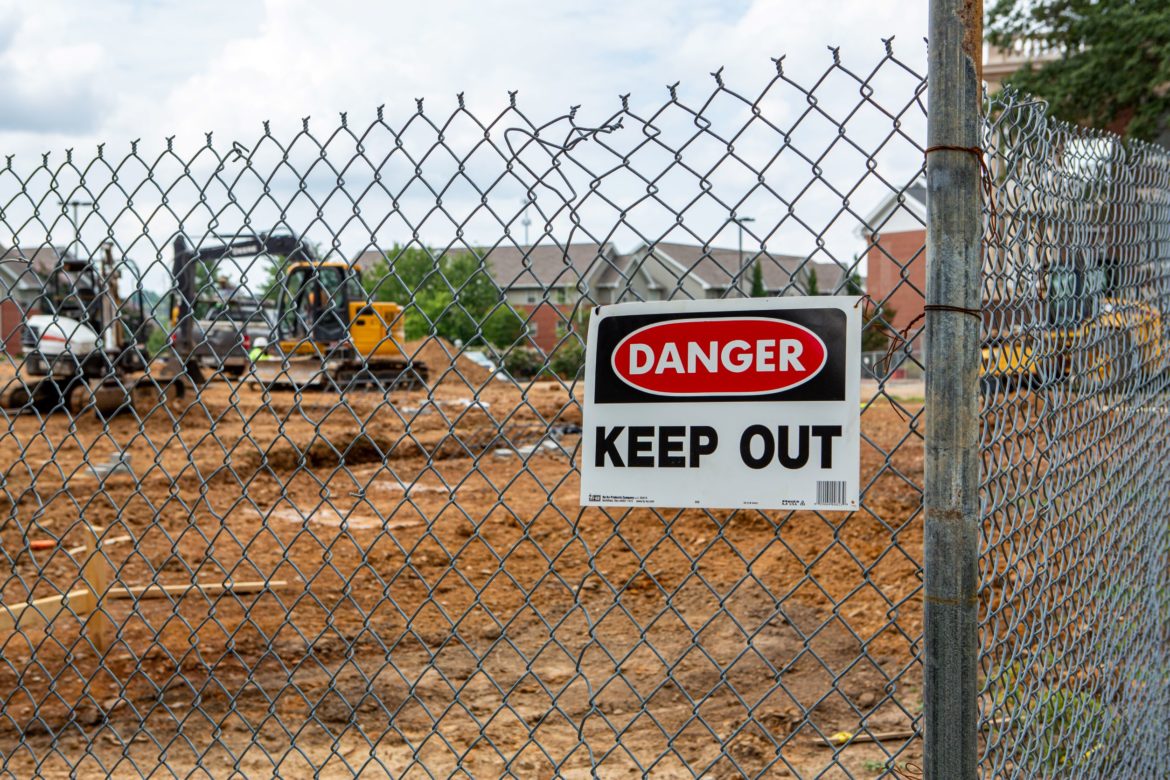 Workers moved forward on laying the foundation of a new academic building last week as crews continue to work on a variety of construction projects across campus.

Physical resources director Danny DeRamus said his department coordinated with outside contractors and companies to tackle a number of projects this summer, including construction of the new Holland-Waller Center and renovations to the Benson Auditorium, Harding University Bookstore, Brackett Library and freshmen men’s dorm Armstrong Hall.

“I’ve been here 40 years, and this is the busiest summer I’ve ever had,” DeRamus said.

Although he has seen progress in the projects on campus, DeRamus said many renovations have been hampered by supply chain delays, with crews waiting for parts needed to complete the projects. In the Benson Auditorium and the bookstore, workers are waiting for electronic control valves, which would make the new heating, ventilation and air conditioning (HVAC) units more efficient.

DeRamus said Flynco, a Little Rock-based construction company, is overseeing work on the foundation of the Holland-Waller Center at the site of the former Ganus Building. The new center will house the History and Political Science and Foreign Language and International Studies departments, along with programs such as ROTC, according to an April 21 article from The Bison.

In the Benson, workers created new men’s and women’s restrooms in the lobby this summer, DeRamus said. They also changed all of the lighting in the Benson to LED fixtures, in addition to replacing the HVAC system.

Brackett Library director Jean Waldrop said construction crews brought changes to the second floor of the library this summer as well, including fresh carpeting and four new study rooms, which have not been painted and spackled yet.

Waldrop said she hoped the updates would give people more opportunities to work in a quiet environment on the second floor.

“For me, the goal was to take care of the students first,” Waldrop said.

In addition, DeRamus said contracted workers were about halfway finished building an east cooling plant behind the library, with the goal of completing the project in October.

Workers also renovated Armstrong Hall over the spring semester and summer. Emily Myers, the Residence Life Coordinator for the dorm, said workers redid plumbing throughout the entire building, replaced tiles on the walls with sheetrock and added a second sink to each of the suite-style restrooms. They also added a common area kitchen on the first floor and expanded the lobby.

To make room for construction, workers have closed off parking spaces in some places across campus, including the lots near the Pattie Cobb residence hall and behind the Benson. Junior Maura West, who lives in Pattie Cobb, said that because of construction on the Holland-Waller Center, she and her roommate have been parking in the lot by the Swaid Center for Health Sciences.

DeRamus said workers hope to open about 30 parking spaces between Pryor Hall and Pattie Cobb once they make more progress on construction in the area. They also hope to eventually open up parking spots and create a walkway behind the Benson Auditorium, allowing students to cross from one side to the other.

“We’re doing the things that we hope can improve that traffic flow,” DeRamus said.