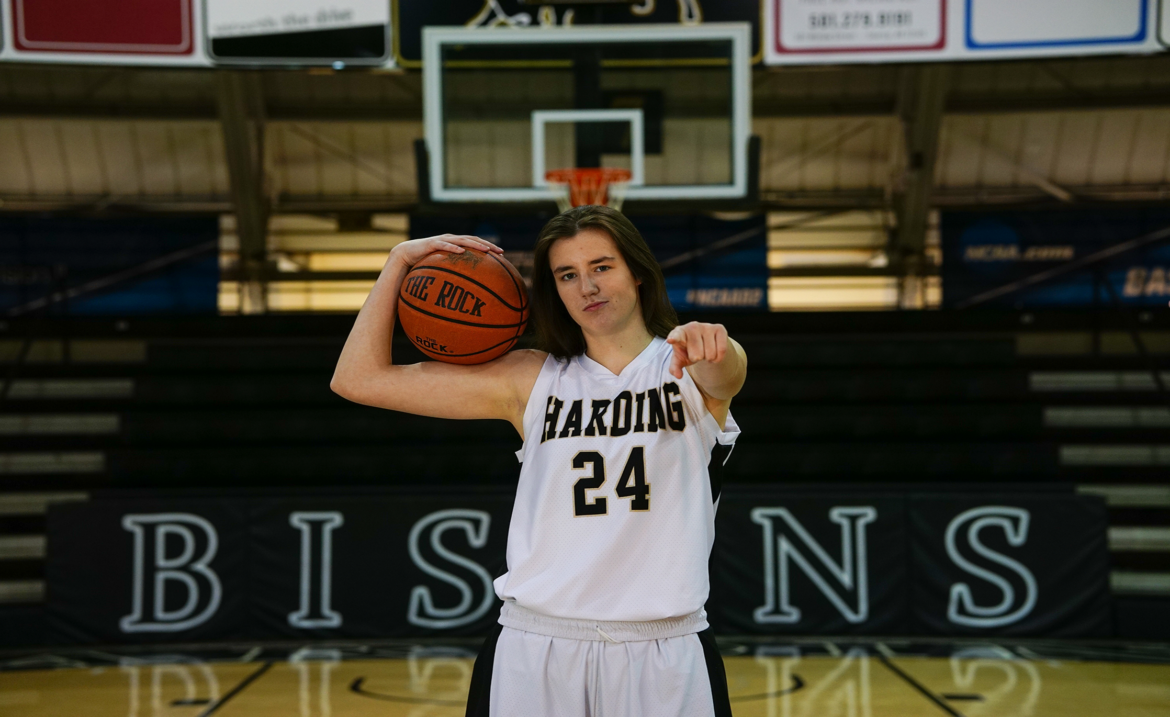 Junior forward Sage Hawley has continued to lead the way on and off the court for the Harding women’s basketball team. Hawley’s skill and leadership have helped Lady Bisons head coach Tim Kirby throughout the season.

“She’s a total positive,” Kirby said. “She buys into everything that we do.”

Kirby and many other college coaches knew that Hawley was a special talent when recruiting her from Harding Academy in Memphis, Tennessee.

Kirby stated that “the sky’s the limit” in regard to the projections that coaches had given Hawley coming out of high school.

Hawley has continued to earn awards for her consistent performances as a Lady Bison. In 2021, Hawley was named Great American Conference (GAC) Freshman of the Year. The following season, Hawley was named to the All-GAC first team.

Kirby said Hawley has not wasted any time since joining the Lady Bisons in 2020.

“You’ve seen some that have wasted that talent, and I don’t think she’s wasted anything,” Kirby said.

This season, Hawley has averaged a double-double with 20.3 points and 10.8 rebounds per game. Hawley’s big moment so far this season came against the Southern Arkansas University Muleriders on Dec. 3 when she scored a school-record 43 points to lead the Lady Bisons to a 105-103 overtime victory. Hawley’s 43-point performance surpassed her previous career-high of 29 points.

Hawley said the locker room environment after the game was great. Players were banging on lockers and pushing Hawley around following her career-high performance.

“I didn’t even know how much I had scored,” Hawley said.

Despite the big performance, Hawley recognized that her teammates also played a major part in the overtime victory.

“Yeah I scored 43, but what doesn’t get talked about is the other 42 points that came from both Rory and Jacie combined, which we couldn’t have won without,” Hawley said.

Another player who made a big impact against the Muleriders was sophomore guard Kendrick Bailey. Bailey hit a game-tying three-pointer with 8.6 seconds left to send the game into overtime. Bailey compared the victory and Hawley’s performance to the Cinderella stories on TV.

Bailey’s friendship with Hawley has continued to grow on and off the court. Bailey explained that the two love to make TikTok videos together, and they don’t like the locker room to be a quiet environment. Bailey also described Hawley as energetic, enthusiastic and selfless.

“Anytime that we are together, we always have fun,” Bailey said. “It’s never a dull moment.”

Hawley is not only active with Harding athletics, but with Harding social life, as well. She is a member of women’s social club Delta Gamma Rho (DGR). Hawley said the women in DGR have helped her escape the “sports mindset” when needed.

While the Lady Bisons continue to fight for a conference title, Hawley knows that the fans will continue to help her and the rest of the team.

“We have the best fans in the whole GAC,” Hawley said. “I truly believe that.”