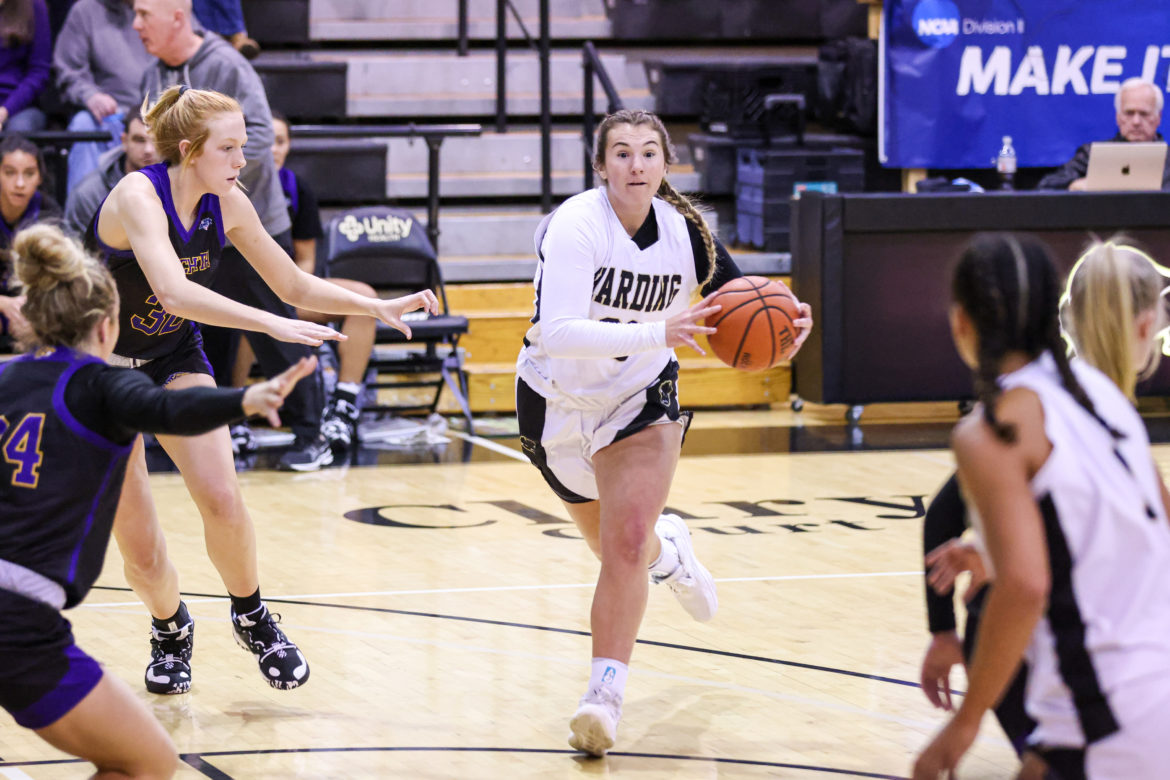 The Harding women’s basketball team picked up a pair of wins last week, and the men’s team dropped two games in a row, as both squads entered the conference part of their season.

The women’s basketball team brought their record to 6-3 with a win over Ouachita Baptist University (OBU) on Thursday, Dec. 1, and a high-scoring, overtime victory against Southern Arkansas University on Saturday, Dec. 3.

Meanwhile, the men’s team struggled last week with a narrow loss against OBU and another defeat at Southern Arkansas, bringing their losing streak to four games and their record to 4-4.

In the first game at the Rhodes-Reaves Field House on Thursday, the Lady Bisons pulled away in the fourth quarter to defeat the Lady Tigers 66-51. Harding grabbed 27 rebounds on offense and overpowered OBU inside the paint with 38 points, according to a Harding Sports article. Sophomore Rory Geer led the Lady Bisons with 17 points.

The women’s team followed that game up with a thrilling comeback that ended in overtime at Southern Arkansas, defeating the Lady Muleriders 105-103. Junior Sage Hawley set a school record by scoring 43 points, and the Lady Bisons posted the second-highest number of points in a single game in program history, according to a Harding Sports article.

The Lady Bisons extended their win streak to six games after starting the season with three close losses. Head coach Tim Kirby said those losses came against tough opponents, and since then the team has worked to improve on little details.

“There is a fine line between winning and losing,” Kirby said. “We talk about that in workouts and preseason practices.”

Geer said the team has an equal number of new and returning players, and the key to their success has been their strong chemistry and ability to come together.

“We’re just a really close team,” Geer said. “I think a lot of people see that.”

The Harding men’s team nearly mounted a thrilling comeback in their game against OBU on Thursday but fell short by a score of 84-81. The Bisons trailed by as many as 19 points in the second half before clawing back into the game with a 20-3 run to pull within two points of the Tigers. However, OBU nailed a couple of key three-pointers and free-throw attempts in the final eight minutes.

The Bisons could not overcome another slow start Saturday at Southern Arkansas, losing 94-58. Harding shot slightly under 35% in the first half, while Southern Arkansas shot nearly 61%. The Muleriders continued their offensive onslaught in the second half, draining 11 three-pointers.

Before the games last week, junior Taylor Currie said his team’s goals going into conference play were to be united and support each other.

“I think just focusing in on everything coach has been talking about and staying focused on our defense and playing hard and getting back to some of our fundamentals on defense will be huge,” Currie said.

Both teams will host the University of Arkansas at Monticello in the Rhodes-Reaves Field House this Saturday. The women’s game will tip off at 5:30 p.m., and the men’s game will follow at 7:30 p.m.