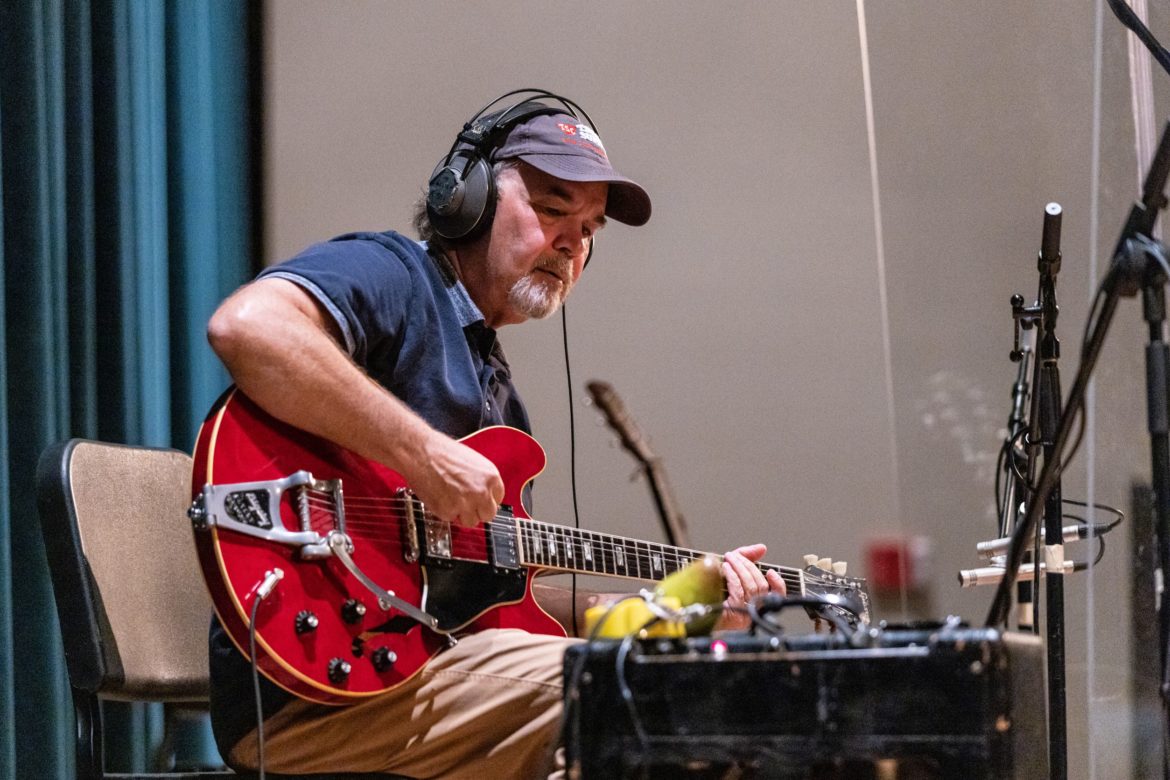 The Department of Music concluded a songwriting contest on Sept. 17, with a music tracking workshop led by bluegrass musician Tim Crouch. The winners of the contest were senior integrated marketing and communications major Addison Carney and senior information systems major Joseph Oliver, who started the band Rivers West together. Both winners had their songs recorded publicly, while Crouch explained his processes.

“We had heard about Tim Crouch before,” Carney said. “We were really hoping one of us was going to win, so the fact that… we got to do two songs today and we each got to have a song recorded by such a world class musician is so awesome.”

Recording studio owner Jon Raney, music department chair Jay Walls and audio event specialist David Robison judged the 16 songs submitted, choosing two out of the 12 composers to be the subject of the workshop. Robsion said it was a tough process, because while some of the songs were great entries, they also had to pick songs that Crouch, who has his roots in bluegrass, could demonstrate best.

Crouch did not hear either of the songs ahead of time – he listened to each one at the workshop once before going into the process of tracking it. Crouch said the point of the workshop was to show how to help a songwriter develop their song.

“I was proud of the turnout,” Crouch said, “and I thought the songs were good. I hope [the winners] are proud of where we got musically.”

Robison said he wanted Crouch to lead the workshop because his method of tracking is unique and Crouch can take things to a different level because of his professional ability.

“It’s such a different approach to how to create music,” Robison said. “It’s not sitting down and reading the music on the page. It’s him listening to it and putting his twist and flavor on what this person has written.”

Raney’s participation was another unique feature of the workshop. Robison said Raney is one of the few engineers in the country that can do every step of the recording process himself: tracking, mixing, mastering and graphic design.

“You can literally walk into his studio with an idea and play it and he can go through that whole process of taking that idea and making it a finished product,” Robison said. “Very few facilities are able to do all of that and to do it at the level and the quality that [he’s] able to produce.”

The two songs will be mixed and mastered, and Carney and Oliver have the option of recording vocals to be added later. Both songs will also be available to Harding for classroom or promotional purposes.