Home Homecoming 2019 The Making of ‘Matilda’ 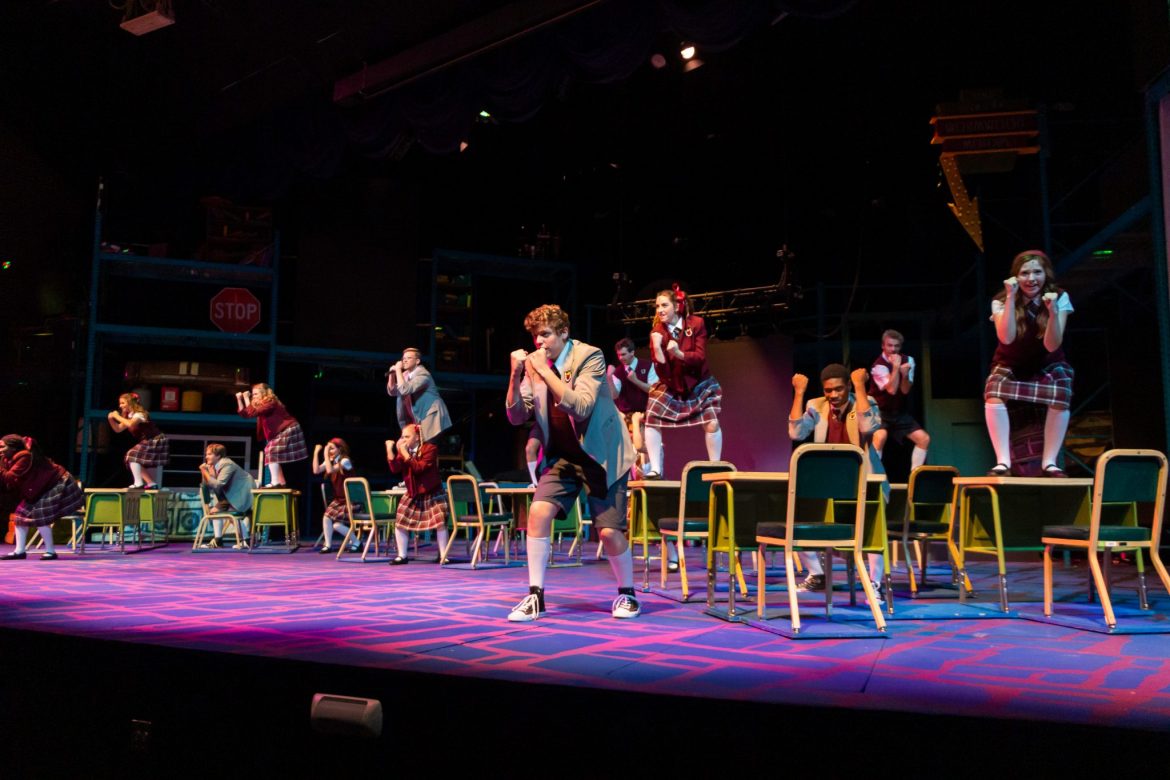 From the show’s conception in the spring semester to planning sessions in the summer to countless hours poured into the first nine weeks of school, the making of “Matilda” has been a complex process all leading up to tonight’s opening performance. With over 50 students and faculty members contributing to the show in some way, “Matilda” is finally ready to shine.

From start to finish, everyone involved has been focused on creating a show filled with joy and imagination.

“We prayed together when we first got together, and I said, ‘This is my goal: I want to tell this story, and I want it to be such a good process, and I want to keep the joy,’” director and assistant professor of theatre Dottie Frye said. “I really believe that if the process is positive and encouraging … if that happens in rehearsal, the product will take care of itself. And that’s what we are working toward.”

Members of the production agreed that the process has certainly been a positive one, from conception to curtain call. Read on to learn more about the making of “Matilda.”

The Set
The story of “Matilda” revolves around imagination and stories of wonder as told through a child’s eyes, therefore engaging visual elements were a critical component from the beginning.

According to set designer Britton Lynn, professor of theatre, the set had to be creative to account for a story that includes many changing scenes. He said every story location is visible onstage for the duration of the show, with lighting techniques and creative placement making clear when the story has moved to a new scene.

“Matilda loves to read … and a lot of the action of the story centers around her time in the library,” Lynn said. “We decided that we would give the actors a library of props to use to tell the story. So the set is a two-story collection of shelves that all of the props live on.”

With a library of props displayed across the stage, Lynn said the set design is completely different from the past several Homecoming musicals in which the design was streamlined and simplified as much as possible. With “Matilda,” however, there was a need to keep everything out in the open in order to make the show work for Harding.

“Right now the Benson is fairly limited in what we can actually do,” Lynn said. “So this has been kind of creatively cluttering up the space … And kind of making it look cluttered but also look interesting so you can actually see everything that’s on stage is the big challenge in this type of design.”

In addition to using one of the largest sets in recent years, “Matilda” is employing several other elements to add to the youthfulness of the show. Frye said audience members should be on the lookout for scooters, over 20 LED screens and four swings hanging from the rafters. Lynn said the entire set was constructed by 40-50 people throughout the process, and viewers will certainly never run out of places to look.

The Characters
With a cast of over 30 members playing characters from wicked Miss Trunchbull to joyfully rebellious schoolchildren, “Matilda” showcases a plethora of dynamic personalities.

Members of both the cast and crew said one of the interesting challenges of Harding’s production of “Matilda” was creating a show largely centered around children with no child actors — every child is played by a college student. This affected everything from vocal coaching to choreography.

Senior Rebecca Light stars as Matilda, and the 4’10’’ actress said tapping into a childlike energy was a lot of fun. Through the process of transforming into the show’s namesake character, Light said she has learned about herself.

“Matilda has kind of proved to me I am capable, because she’s so small and in a terrible place in life, but because of her bravery and her wisdom and her love and inclusiveness of everyone, it’s taught me I can be brave,” Light said. “I can be smart. I can use my talents for good and for helping others.”

In contrast to the endearing children, “Matilda” boasts over-the-top characters designed to be disliked, such as Miss Trunchbull and Matilda’s parents, the Wormwoods. assistant professor of music Laura Eads said she’s always had a dream of playing the headmaster, and was delighted to be cast as Miss Trunchbull after auditioning.

Eads has played many characters through her years of music and opera experience, but she said Trunchbull is easily the meanest character she’s ever portrayed. She said she tried to act in a way to showcase the character’s crazy side in addition to her mean spirit.

“There are definitely things where she’s just straight-on mean, and it’s hard to do,” Eads said. “It’s emotionally hard to do that four hours a night, because that’s not really my nature. It’s been a real challenge in a good way.”

Along with choreography and acting choices, the characters’ personas shine through their hair, makeup and costumes. Costume designer Katy White said seven students have been hard at work pulling everything together, which includes over 400 separate costume pieces.

Senior Evan Chesney serves as hair and makeup designer and dresser, and he said choices in a character’s style help indicate who they are. He specifically recounted the process of styling the tacky wig worn by Mrs. Wormwood, who is played by senior Ava Galyean.

“Styling Ava’s wig was probably the most fun part, because I got to have a lot of fun styling it and making it big,” Chesney said. “So that was entertaining.”

The final piece of creating the characters of “Matilda” is one the cast has been working on for a while: singing and speaking with British accents. Vocal coach Stacey Neely, adjunct professor of music, said this skill came more easily to some than others, causing some laughter and a lot of hard work to get to a good place with the accents.

“It’s been an entertaining challenge for us to try to get that consistent,” Neely said. “And I think they’re going to do pretty well.”

The Story
When the rights to “Matilda” became available for usage, Frye said the department of theatre applied within 30 minutes for the opportunity to put on a show she has always imagined. Frye loved the chance to direct a show relying heavily on ensemble work, a theatre technique she has always enjoyed.

Even more than the style, however, those involved in the making of “Matilda” have loved the story and message it embodies.

“Every child is valuable,” Frye said. “In ‘Matilda,’ her parents don’t recognize what a beautiful gift she is, and somehow she still manages to shine and grow. Ultimately she does find a place where she’s loved and … there’s healing that goes on all the way around. I love the story.”

When asked what audience members could look forward to about “Matilda,” senior Drew Holley, who plays Mr. Wormwood, said it’s up to the viewer.

“It’s a very big imagination show, so I guess what you’re looking forward to is just anything you could imagine,” Holley said. “It’s about what it’s like to be a kid again.”

“Matilda” will be performed in Benson Auditorium tonight and Saturday at 8 p.m. Tickets can be bought online at hardingtickets.universitytickets.com or at the door.

"We've gotten to see God heal and transform lives in a most dramatic fashion. So now what do we do?" | Graphic by AVERY TILLET

Photo courtesy of THE PETIT JEAN

"I always told them to remember that they were living in a historic building. So I'd ask them to please take care of her – she's a bit more delicate than the other dorms." | Photo by SADIE THORNOTON