Home Homecoming 2019 Bringing back the Bisons 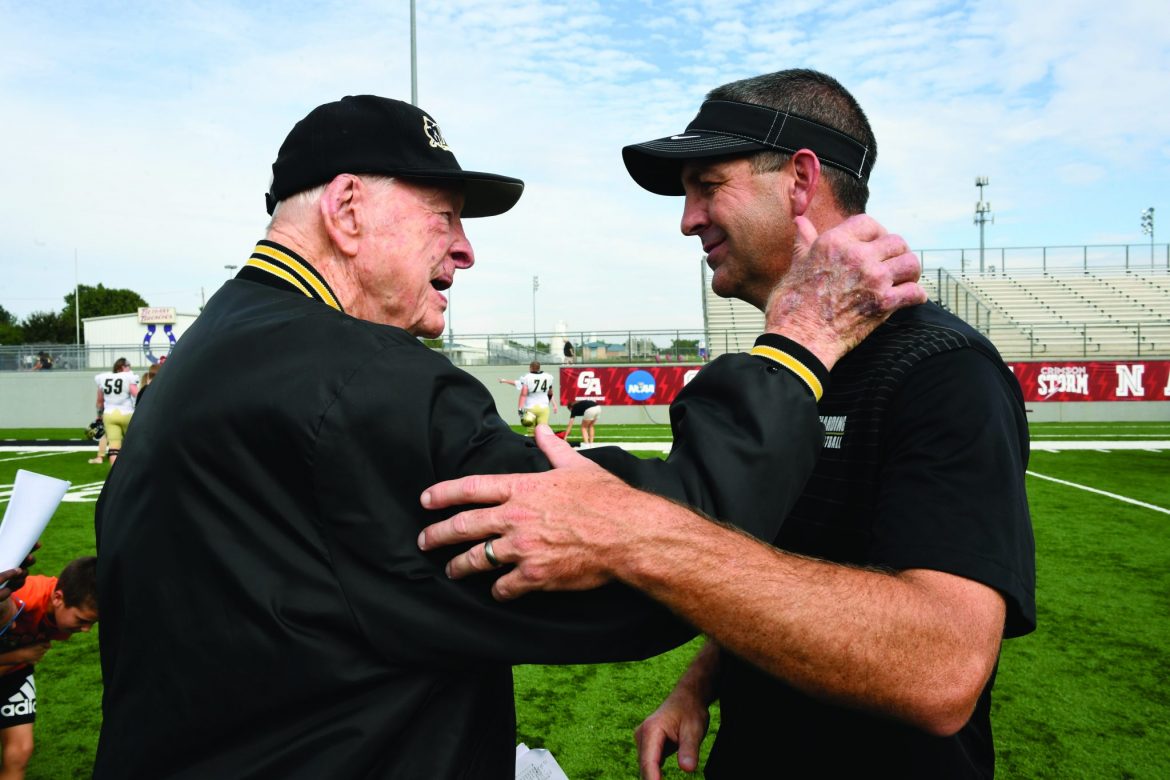 It has been 60 years since Harding athletics programs were reinstated in 1957 after being discontinued for 20 years. Chancellor Emeritus Dr. Clifton L. Ganus played a vital role in that endeavor — shaping Harding University into the institution it is today.

Dr. Ganus died Sept. 9, leaving many members of the Harding community to reflect on the impact he made on the University, specifically athletics.

Scott Goode, assistant athletic director for sports, spoke fondly and passionately about Harding athletics and Dr. Ganus, a man crucial to their success.

According to a research report submitted by Donald Gordon Scoles in 1970, Harding football was terminated in 1931, during the peak of the Depression. By 1939 it was too expensive to continue any athletics.

“It was either serve the 25 kids who were participating in athletics, or use that same money to take care of everybody on campus,” Goode said.

The report by Scoles said that in 1951, M.E. Berryhill and others began talking about bringing back intercollegiate athletics.

“M.E. Berryhill started the discussion of possibly bringing it back,” Goode said. “Nothing was done until 1957, when Dr. Ganus was the vice president. As soon as chatter started about ‘Hey, maybe we could get this thing back up and running,’ he and Dean Joe Pryor got together with Berryhill. Really those three guys were the ones that spearheaded the re-emergence of Harding sports.”

In a 2014 interview with Ken Bissell, senior advancement officer, Dr. Ganus spoke in detail about the reinstatement of Harding sports.

“Joe Pryor, Pinky Berryhill and I were the three who pushed for getting intercollegiate sports back,” Dr. Ganus said. “We kept bugging Dr. Benson, I guess, so he asked us to serve as the committee to work in that area . . . football came in the fall of ’59. But we had to start from scratch.”

Goode said football did not return until 1959 because the search to find the right coach was crucial to the committee.

“It’s not hard to recruit a coach to come here to coach now, because we are usually successful. We have great [students], we have great facilities,” Goode said. “[In 1959] we had none of that except great [students] . . . so when Carl Allison, former running back at the University of Oklahoma, said yes to coaching here, they were shocked and wanted to get the program revamped as quickly as possible.”

Hiring Allison was key to the program’s revamp, because his name was well known and attractive to prospective players.

“We were trying to find a member of the Church of Christ who had experience and knew football and played football, who would be a good coach for us at Harding with our philosophy and attitude and spiritual values and so on,” Dr. Ganus said. “Somebody came up with Carl Allison.”

“Dr. Ganus, one of his many talents was the ability to go somewhere in the world, tell somebody about Harding, and get them to come here,” Goode said. “I’m sure he put his best face forward to get Carl Allison to come.”

The report showed that the program rebuild was slow and steady — coming from nothing and trying to be competitive — but Harding football eventually became a well-established and important piece of the Harding identity, in large part thanks to Dr. Ganus.

“I felt super blessed when I got this job in 1999, meeting Dr. Ganus and finding out that the most important person that’s ever been on this campus — in terms of keeping Harding alive and afloat — loved sports,” Goode said. “He would come in my office even at 90+ years, sit in the corner chair, and we would go through every sport — athletes, statistics and expected outcomes.”

No one got to experience Dr. Ganus’ love for Harding sports quite like his family. His son Dr. Clifton L. Ganus III (Cliff), professor of music at Harding, spoke of his father’s commitment to Harding sports that was evident to all.

“He went to everything,” Cliff Ganus said. “He would fly or drive six or seven hours. [His commitment] was just visible to everybody … I enjoyed going with him but didn’t get to go to games as often as he did.”

“He loved this campus and the people here,” Cliff Ganus said. “Though he had played almost every sport … he loved football. He coached football, and he was undefeated in Charleston. He has always loved football. I think it’s always been a special passion for him — so when he found out that Harding was reinstating other athletic programs but didn’t have a football team, he felt that we ought to have one. It’s part of what a school does.”

Goode echoed the sentiment that Dr. Ganus had a special place in his heart for Harding football. Goode said a lot of football players’ best memories at Harding were made when Dr. Ganus came to talk to them after games.

“The thing that he would do that would mean so much to players was, after the game he would come up to them, already know their name, know where they were from, and he would make a personal connection to them — rejoicing with them in the victories and hurting with them in the losses,” Goode said. “Dr. Ganus was 100% genuine. He poured his heart into Harding athletics.”

Junior linebacker Dylan Hendricks said he was always impressed by how personable Dr. Ganus was with each player.

“He would be at all the sporting events, rain or shine,” Hendricks said. “He cared about us. He would know our names, know our hometowns, our stats, all of that. You could tell that he cared a lot about us as football players and as people.”

Cliff Ganus said that in his father’s last four months of life, he gathered all the coaches of every sport into his living room where he was lying in bed.

“He visited with them for about an hour and a half,” Cliff Ganus said. “The idea that we are building men and not football players was crucial to him.”

From 1959 to 2019, Dr. Ganus left an indelible mark on the University and Harding football, one that is sure to endure for many years to come.