Home Blog Running with a vision 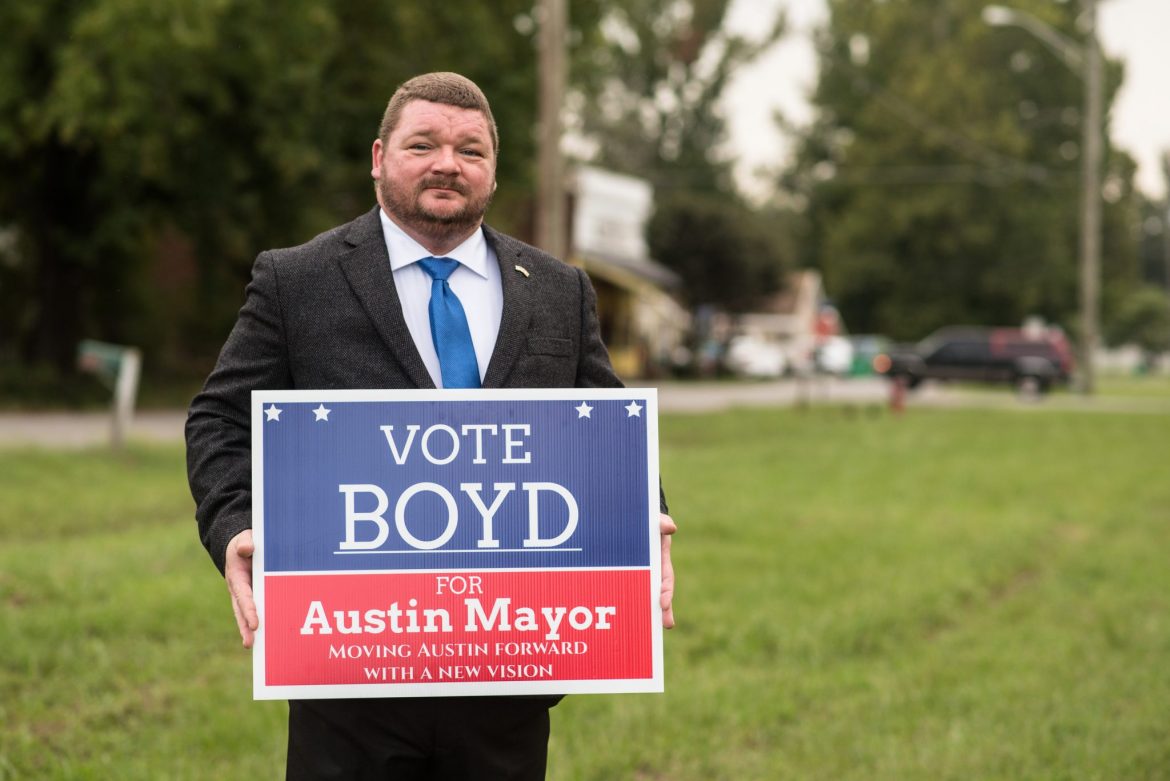 Senior Bobby Boyd ran for mayor in Austin, Arkansas, with the goal of helping the community grow.

Senior management major Bobby Boyd made the decision to run for mayor of his hometown, Austin, Arkansas, after realizing there were problems that needed to be fixed within the city. Boyd used his knowledge of business management to help his campaign.

“I looked at the process about six years ago and decided not to run in the last election,” Boyd said. “I didn’t feel like I was ready.”

Prior to his campaign, Boyd, a 44-year-old non-traditional student, worked for the city in different capacities, which prepared him for a potential political career.

“Three years ago, I began working on the planning commission, and then two years ago, I was appointed as chairman of parks and [recreation],” Boyd said. “During that time, I started to understand the inner workings of our government.”

Dr. Mark Davis, professor of business administration, said that this was the first time that a Harding student had run for mayor.

“Students have shown interest in politics but never ran for mayor,” Davis said. “Boyd is the first that I am aware of running.”

Davis believed that majoring in business helped Boyd understand some of the mayoral duties and the policies that were put into place.

“The city is still a business,” Boyd said. “I will still have the department heads run their respective departments. If I win, I will be there to help make sure that everything flows smoothly.”

For many students, it would have been daunting to take on a civil office, but Boyd was not concerned about finding the balance.

“The position will be a part-time job,” Boyd said. “With graduating in the fall, my kids being older and graduate school being online, balancing everything will not be difficult.”

Boyd planned to incentivize bringing business into the town of Austin if he won the election.

“I believe that we will have to grow business and grow our tax base to be able to afford the things that we want,” Boyd said.

After learning that Boyd was running, sophomore management major Rachael MacRae thought it was a good opportunity.

“The city could benefit from having someone [from] the Harding community and with them being around all types of people,” MacRae said.

During his campaign, Boyd ran on Christian values and positivity, remaining friends with the other candidate.

“Having been at Harding has been a blessing in itself,” Boyd said. “My mission statement is that I am going to run a good Christian campaign. I am not [going] to go low, get ugly or bring in any negativity.”

The election results were announced on Nov. 6, 2019, and Boyd did not win against the incumbent mayor.

Senior Bobby Boyd decides to run against the incumbent Mayor Bernie Chamberlain, who has been the mayor of Austin, Arkansas since 1999 — six consecutive four-year terms. The election results were announced on Nov. 6, 2018. |  photo by Sterling McMichael