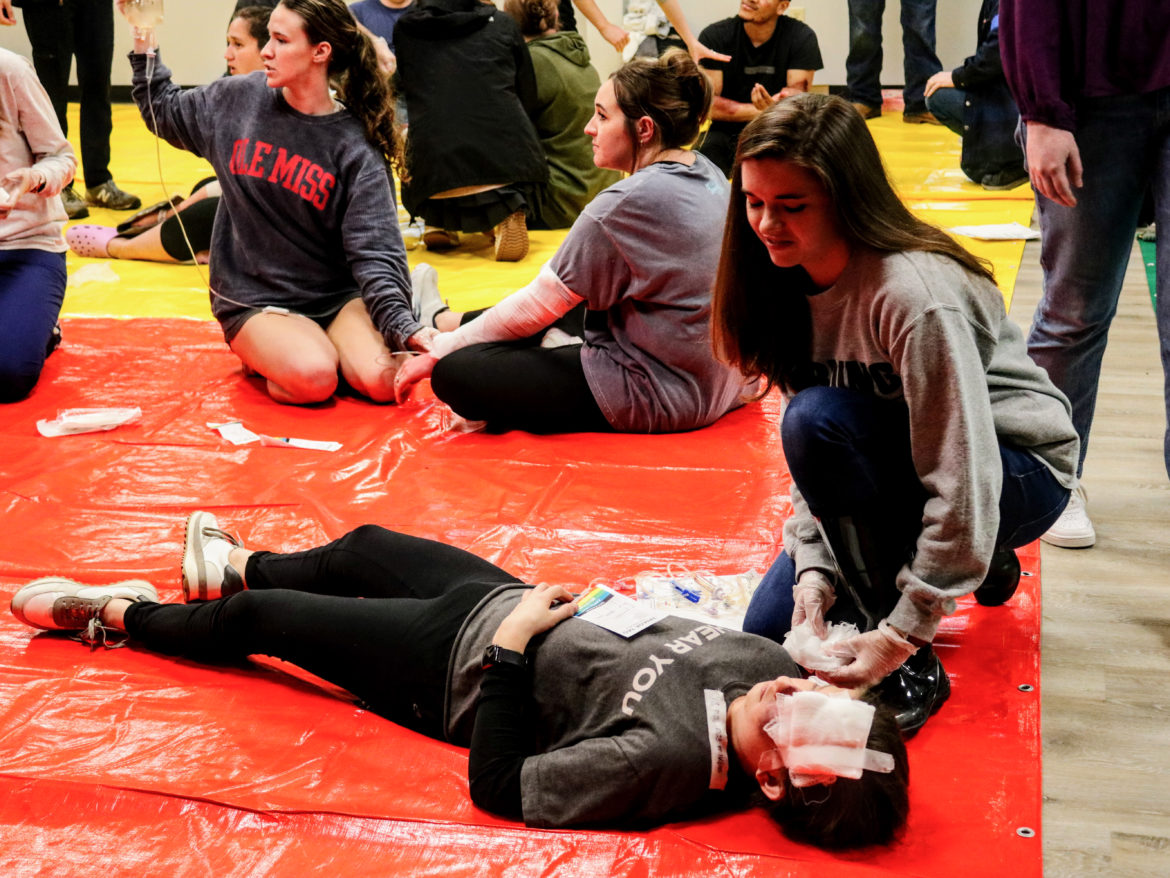 Multiple groups from across campus and the Searcy community came together last Wednesday for an emergency fire drill in Kendall Hall to test safety procedures and practice responding to a disaster.

Director of Public Safety Craig Russell said members of various academic departments and programs — such as allied health and counseling — took part in the annual drill at 3 p.m. on March 30. Russell said Harding’s Committee of Emergency Management — which conducts the drill each year and consists of people from different areas on campus — invited local organizations such as the police and fire departments, emergency medical services and Unity Health Hospital members to participate.

“One of the neatest things about this drill is how it brings different parts of our community together,” Russell said.

Although participants would typically conduct portions of the drill outside, Russell said organizers moved the simulation indoors this year because of rainy weather conditions.

Senior nursing major Rachel Ledbetter said she and a group of nursing and physician assistant students played the roles of victims during the drill. Beforehand, Ledbetter’s character was assigned a number of vital signs and a status change from yellow to red, indicating her health problems would grow more severe. Workers used makeup to apply fake second-degree burns and other injuries to people playing victims. Overall, Ledbetter said this experience helped her see how anxious and helpless patients can feel during traumatic situations.

“It reminded me of how much we truly need to invest in our patients and provide proper education and mental health services, and how truly vulnerable patients are when they’re in our care,” Ledbetter said.

Ledbetter said she started the drill in a bedroom on the second floor, where firefighters practiced assessing her. She then entered a hallway filled with fake smoke and went downstairs to the triage center, where groups of healthcare students diagnosed and treated her simulated burns.

Russell said his committee started the annual drill at least 20 years ago and have simulated a variety of disasters including fires, explosions and active shooter emergencies in past years. Organizers canceled the event for the first time in 2020 during the COVID-19 pandemic and brought the drill back on a smaller scale in 2021.

Dean of students Zach Neal said his role on the Emergency Management Committee is to account for students and make sure they are safe in the event of an emergency. Neal said he planned to assess results from the drill to see how many students responded to the emergency notifications, as well as to determine whether his team needed to take any actions to further protect students.

“I’m really proud to be a part of a university that has such an emphasis on improving and making sure that students are safe,” Neal said.