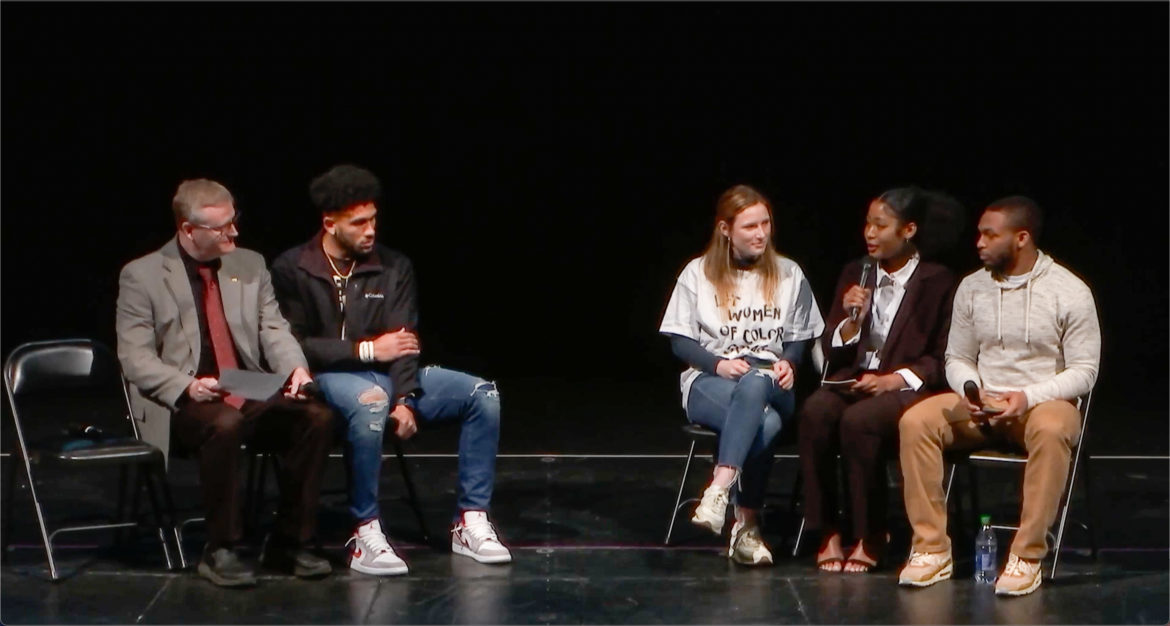 On Wednesday, Feb. 23, the Black Student Association (BSA) hosted a panel after the devotional period of chapel, and sought to have a conversation about allyship. This program was the fourth in a five-part series of chapel programs and devotionals planned by the BSA during Black History Month. During and in the hours following the panel discussion, YikYak posts were made in strong dissent toward many of the statements made by panelists, and the existence of the panel altogether.

YikYak is a social media channel that originally launched in 2013 and relaunched in 2021 that allows people to anonymously create and view discussion threads within a five mile radius of their location. Following the BSA’s Feb. 7 chapel program — in which Walter Kayesse, a College of Pharmacy student, discussed the topic of medical malpractice that Black people have historically and systemically faced — junior Halle Miller, public relations officer for the BSA, noticed some hateful responses on YikYak, and responded with an opinion piece titled “Say it to my face,” printed in the Feb. 11 issue of the Bison.

“Who is smiling in my face but doesn’t really honor me — either as an image-bearer or as a Black person — who are these people?” senior Phallen Reed, president of the BSA said in an interview. “I think there has been a little bit of increased paranoia, or just, unease and unrest, even. That kind of reminder, so to speak, that this is where people place us. This is where we fall in society at large, in society at Harding, in the South — whichever way you want to put it. So, in us saying ‘say it to my face,’ it’s just — let us know who you are so we know how to operate around you.”

The various YikYak comments that followed were gathered by 2021 alumna and former BSA president Raissa Ames.

Ames compiled more than 30 screenshots of “current students showcasing the truly awful, bigotted, and racist things being communicated through the app,” in a PDF, and attached it in an email she sent to members of the former African American Task Force Committee (AATFC). Ames said she was not aware if the committee still stood or if the members she knew from last school year were still involved.

“However,” Ames said in the email, “I once remember that this was a space I felt safe to voice concerns and that is my purpose for reaching out to you all today.”

In fall 2020, in the wake of Black Lives Matter protests nationwide, and in an effort to create processes for recognizing African American achievement on campus, former President Bruce McLarty formed the AATFC. Dr. Greg Harris, assistant professor of kinesiology and women’s soccer coach, was appointed head of the committee. The committee was made up of current and former faculty, staff, board members, and students. Harris said the purpose of the committee was to “intentionally honor and create ongoing processes for acknowledging the support, service, leadership, and inspiration provided by African American men and women.”

With that mission in mind, by the end of the 2020-21 school year, Harris said the committee had accomplished three goals: “getting approval by the board of trustees to rename the administration building to the Howard Wright and Elijah Anthony Administration Building; the creation of the Botham Jean memorial; and the honoring of some of the firsts by African American students at Harding University.”

Harris said that after meeting the three goals, he was made aware that the committee would be dissolved in spring 2021.

In her email, Ames made three recommendations, and asked the committee members to urge immediate action from University administration: (1) tracking IP addresses of YikYak users, and bringing individuals that violated the mission statement and handbook in front of the disciplinary board of the school; (2) banning YikYak from Harding servers; (3) releasing a school-wide statement speaking against the hate comments made on the app, and affirming that that type of speech does not align with the mission of the University.

“If you are not yet convinced,” Ames said in her email, “I advise that you think about how these posts reflect the hearts and minds of the student body of the institution I am sure you all hold dearly. The students that made these posts are not just students, they are club members/leaders, organization members/leaders, and most importantly leadership amongst church congregations. In what world would we want the people behind these posts in any of these positions?”

Reed said that while she thinks Ames has had a different experience than she has, she appreciates the bold strides that she has made towards change, and she admires that Ames still cares about change at a school she has already graduated from.

“As a whole, no Harding student has had the exact same experience,” Reed said. “But, I know for me personally, I appreciate the noise that Raissa has been making, because that brought to light things and avenues that I didn’t even know were possibilities.”

Dean of students Zach Neal sent an email statement to all undergraduate students on Thursday, Feb. 24, acknowledging the YikYak conversations that had begun the previous day. In the email, Neal said the statement was made via email, rather than in person, due to the inclement weather that had closed campus.

“At Harding we have a deep appreciation for racial diversity,” Neal said. “We are supportive of open and healthy conversations regarding race in our society and within our campus community. Unfortunately, some of the conversations that have taken place on anonymous social media platforms are neither open nor healthy. I am very sorry that members of our student body are now struggling because of the careless or hateful words of someone else.”

Neal said that, in affirmation of the student handbook, “any racist language or behavior is strictly prohibited and will be met with disciplinary action when individuals are identified.”

Neal said he asks that students use social media for encouragement, and that he was prayerful that this could be an opportunity for members of the campus community to reflect on their own thoughts, words and actions. Neal offered to meet with anyone personally if they had concerns.

On Monday, Feb. 28, President David Burks made an announcement at the close of chapel, affirming Neal’s email. Burks said the University was founded on spiritual convictions that remain at the core of its identity.

“The character, example and concerns of Jesus Christ are the bedrock standards that shape who we are,” Burks said. “I believe — we believe — all people are created in the image of God and therefore we are all of equal value to him, Genesis 1:27.”

Burks said that because God shows no partiality, neither does the University, and accepts, respects, and loves students of all races and nationalities.

“We stand opposed to racism in any form, and we expect everyone who is a part of Harding to be treated with a dignity and value that everyone deserves by virtue of being an image bearer of God,” Burks said. “I know this community. I know the students and faculty and staff who are a part of it. and I know that’s how we want to live and how we want to treat everyone.”

Reed said that if Harding does have these ideals and values, then that should be reflected in difficult conversations about racism and prejudice, even if many students and faculty members do not understand firsthand. Reed said she does not think that the University tried to start having conversations about racism and injustice until Botham Jean’s death in September 2018. Even now, she said that more work is needed to bring enough attention to the injustice that Black students at Harding continue to face.

Harris said that while a lot of hurt was healed by the goals achieved, and the statements made at each of the dedication ceremonies, he wished the task force committee still existed and could help the Harding community continue to grow through what it is continuing to experience.

“Throughout our meetings with the task force,” Harris said, “Our thoughts and feelings evolved to the point of thinking that we may be called to another purpose of being a group that can help Harding grow and heal through supporting and educating all of our students, faculty and staff at Harding in various ways.”

Executive Vice President David Collins said in an email statement to the Bison that, “We at Harding will continue to call each member of our community to a uniting, Christ-like love for one another, and we will maintain the highest of expectations regarding each one’s behavior.”

Collins said he was saddened to learn about the inappropriate comments being made anonymously, and that hateful comments have no place at Harding. He said he appreciated the statements by Neal and Burks, and was thankful for the continuing work of Tiffany Byers, director of multicultural student services.

“We are committed to providing opportunities for our students to hear and understand the perspectives and experiences of each other when done so in a respectful, productive manner,” Collins said. “I am encouraged that, even out of this situation, many conversations and meetings are already happening.”

Reed and Miller both said that today’s BSA meeting is open to the entire student body, as well as faculty, staff and administration. Both Reed and Miller said that they want it to be a forum for discussion and education. The meeting will be held at 7 p.m. in the student center.