Home Sports Another show, another costume 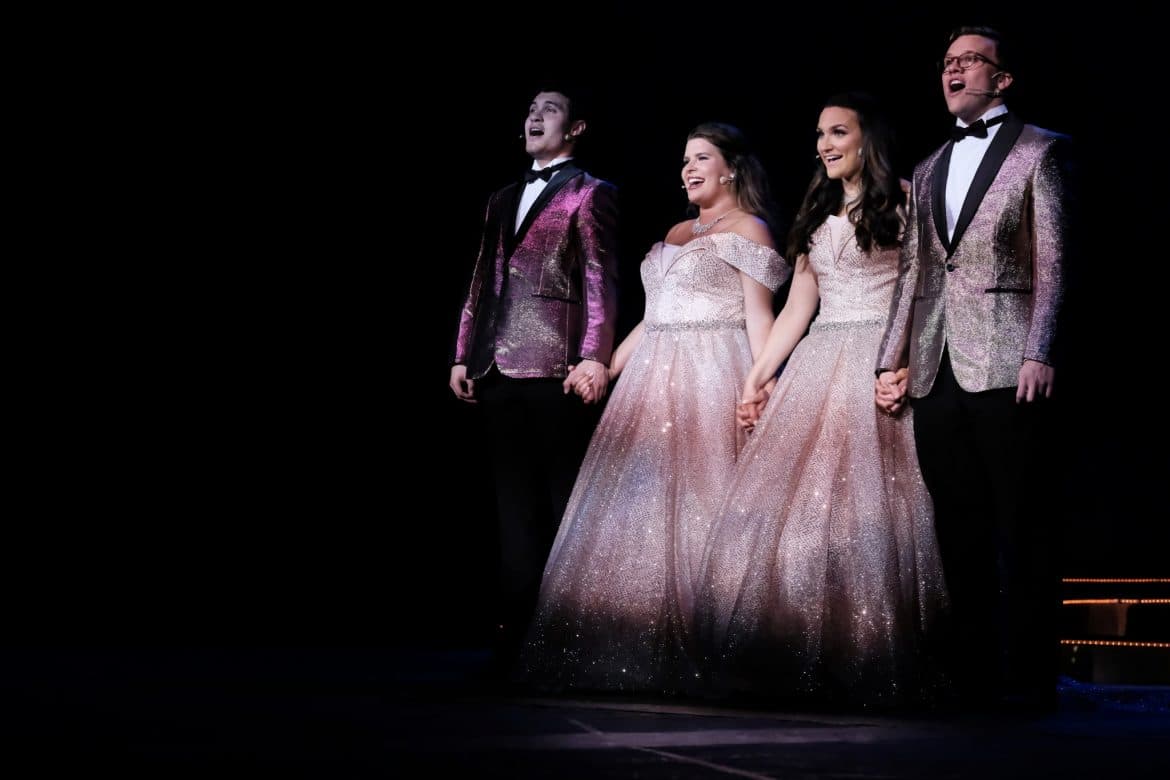 While many Spring Sing attendees only see costumes and stage sets from afar, set designers and costume coordinators are tasked to pay close attention to detail and spend much time in preparation. This year, they had additional challenges to face.

As to be expected, all of the performers have to wear masks during this year’s performance. Each individual show has found a way to make their masks match their costumes. However, this requirement presented itself differently for Spring Sing hosts and hostesses. With anywhere between 11 to 14 wardrobe changes in a show, hosts and hostesses must also ensure their costumes are COVID-19-friendly.

Senior Spring Sing host Max Ross said that the hosts and hostesses had to test several variations of masks to find the one that best fit the circumstances, including clear masks, “singer’s masks,” wrap-around masks, shields, fabric masks and more. The face covering they are using, which allows them to stay safe and protect others around them while also giving them enough vocal freedom to not negatively affect their sound with a mic, is a face shield that has an attached skin-colored chin piece to enclose their breath. However, this change does prohibit smaller costume pieces, such as glasses or some hats, to be worn due to the full-face covering.

Planning costumes for a show of this magnitude takes a lot of work and time. Katy White, costume shop coordinator, said she started planning in November and December, and since then she has had weekly meetings to run through costume ideas, plan and ensure that the costumes match the directors’ visions and stay under budget and within dress code. The entire process is collaborative, so planning ahead ensures that every costume can fit the performers and match the mood of the song and the theme of the show.

While the planning does involve looking at a large thematic picture, it also requires planning out the details. For instance, some wardrobes might have 10 small pieces that go with it. White said the whole process requires organization, and people in the theater department provide their creative input and contributions to make it possible.

“The whole theme is centered around storytelling,” Ross said. “Costumes help us embody what we are singing and make sure we as performers are where we need to be mentally to sell the number for the audience.”

Behind the scenes, the hosts and hostesses must have help to ensure everything runs smoothly. There is a dedicated group of students who work in the costume shop, and they ensure everything functions properly for the hosts and hostesses, is appropriately tailored, runs in a timely manner, and everything is in its proper place for every rehearsal and performance. In previous years, the two hosts would share a dressing room, and the two hostesses also shared a dressing room, as well as some of the ensemble members. This year, they have had to find ways to spread out and keep their areas sanitized while under the same pressure, time constraints and limited space as they were in the past. Senior Emily Cantwell has worked in the costume shop for four years, and she said that it is an incredibly challenging and rewarding experience.

“The work of the team members of the shop is so important in bringing Spring Sing to life visually,” Cantwell said. “Each number will have an entirely different theme, so we do our best to create the unique world of the number while also maintaining the overarching theme of the show.”

Although the lights, sets, music, crew, performers, audience and costumes are crucial to the production’s success, the support of the community has been what has kept Spring Sing’s tradition going.

“Spring Sing is truly an integral part of the Harding experience, and it’s one thing that thousands of people throughout the years can connect to,” Montgomery said.

“To limit the number of performers on stage, we have pre-recorded the Jazz Band features as well as the production numbers with the hosts, hostesses and ensemble,” Stockstill said. “The clubs were limited in the number of people who could sing on the track, and they had to sing in masks. While the audience will be limited in numbers, the enthusiasm and the joy of the performers will still come through.”

Additionally, rather than having external judges, some members of Harding faculty and staff will judge the shows this year.

Senior Ava Montgomery, two-time Spring Sing hostess (not including her selection in 2020), said one of the more significant changes to this year’s production is that they did not perform the children’s matinee before officially opening the show.

“[The children’s matinee] is like our glorified dress rehearsal, and the kids are the most fun audience,” Montgomery said. “You can go out and mess up everything that you’ve practiced, and they will just laugh and cheer and love every second of it. They’re very forgiving, and that is always so much fun, so we’re not doing that this year because of COVID, so that’s been a bummer, but we totally understand.”

Montgomery said that since children will not be able to attend a children’s matinee, she hopes they will attend one of the shows with their parents.

Dr. Steven Frye, chair of the theatre department and director of Spring Sing, is eager to reclaim what was lost last year due to the cancellation of “Once Upon a Time.” Frye said he made the initial proposal in November 2020 to limit Spring Sing show attendees to students and employees. University President David Burks made the appeal in February 2021 to host a larger audience, which was later approved. Despite the restrictions, many accommodations are being made to make the production possible.

“We’re gonna do this thing, and I’m excited,” Frye said.

Senior Hallie Martin, women’s social club Pi Theta Phi Spring Sing director, said she is glad the shows were moved back two weeks because it allows more of her cast and crew to receive the second dose of the COVID-19 vaccine to ensure a safer production.

“It’s also been a blessing since the new club members started practicing with our show at the beginning of February due to Club Week being pushed back to late January,” Martin said.

Despite the changes, Montgomery also said she is grateful for the opportunity to perform this year and for all the memories she has made because of it.

“Spring Sing — whenever you’re involved in it so heavily — it always feels really important,” Montgomery said. “It’s so wonderful to be a part of something so much bigger than yourself, but this year in particular carries so much more weight of importance because we weren’t able to do it last year, and I’m just awestruck in rehearsal all the time … and I just think about it all the time and just how lucky we are that we are able to do it this year.”

Think before you speak