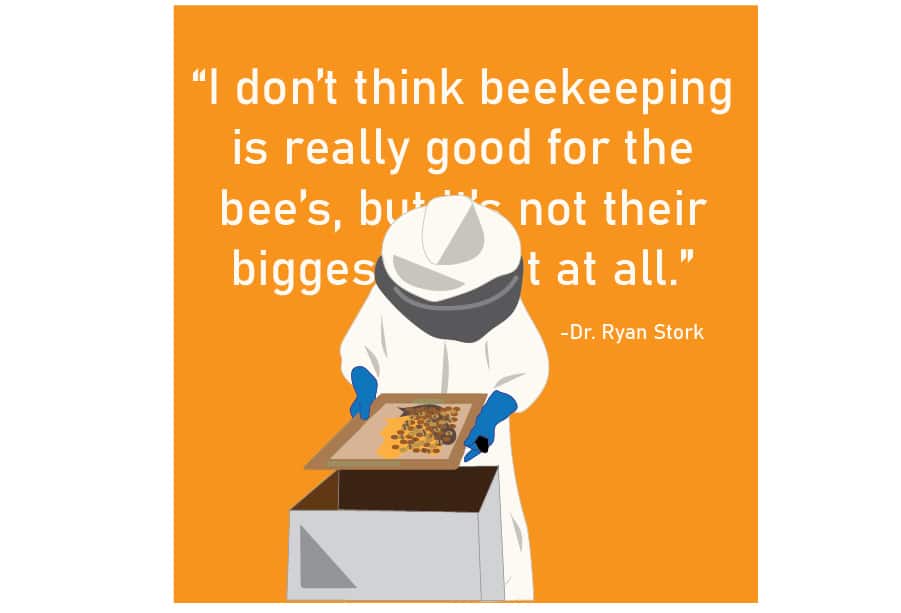 The environmental conversations surrounding beekeeping in recent years have been filled with contradicting points of view and opinions. Some say that there are only positive effects of beekeeping, from pollination to diversification of land. While the other side would call this domestication of bees and have concerns about introducing non-native species that could take over a native population.

Even with the simplification of the loaded statements above, there is still the concern for the long-lasting effects beekeeping may have on an environment. Honeybees are not native to North America, which is why many ecologists are concerned about the recent uptick in domesticating bees.

Dr. Ryan Stork is an arthropod ecologist who teaches a class called “Bug Biology” during intersession at Harding. Stork said he agrees that there could be a threat to native species of bees if there were a rise in beekeeping in the area, but he does not think that this is the biggest threat.

“I don’t think [beekeeping is] really good for the bees, but it’s not their biggest threat at all,” Stork said. “There is definitely a way to do it properly.”

The biggest threat to bees, according to Stork, is the lack of untouched areas for them to build their nests and to pollinate. The ecologist suggests that if people want to help the bees, they should leave areas as natural as possible. He offered ideas of how to help domesticated or native bees thrive:

Ecologists and researchers across North America are interested in the long lasting effects of beekeeping. In 2018, NPR released an article written by experts in the field about the possible concerns.

The article, titled “Honeybees Help Farmers, but They Don’t Help the Environment,” outlines some of the more recent discoveries made by researchers in this area. The main draw from the article was quoted from Marla Spivak, who is a leading researcher of bees.

“We’re all on a learning curve, all of us,” Spivak said. “It’s like honeybees were the portal — the door to much larger issues, conservation issues in general.”

Spivak echoes many of the thoughts offered from other experts, but also of a Harding student who has grown up around beekeepers.

Senior Kaley Burks got into this hobby as a young teen when her grandfather found a hive on some of his property.

“I think it’s really harmful to domestic bees,” Burks said. “If you want the hives to not be domesticated, then you run the risk of them getting infections or dying because there’s [no] pure areas of nature nowadays.”

Even from the eyes of someone who is newer to the field, it is obvious that keeping bees should not be taken lightly. Researching and understanding the surrounding native areas should be taken seriously.