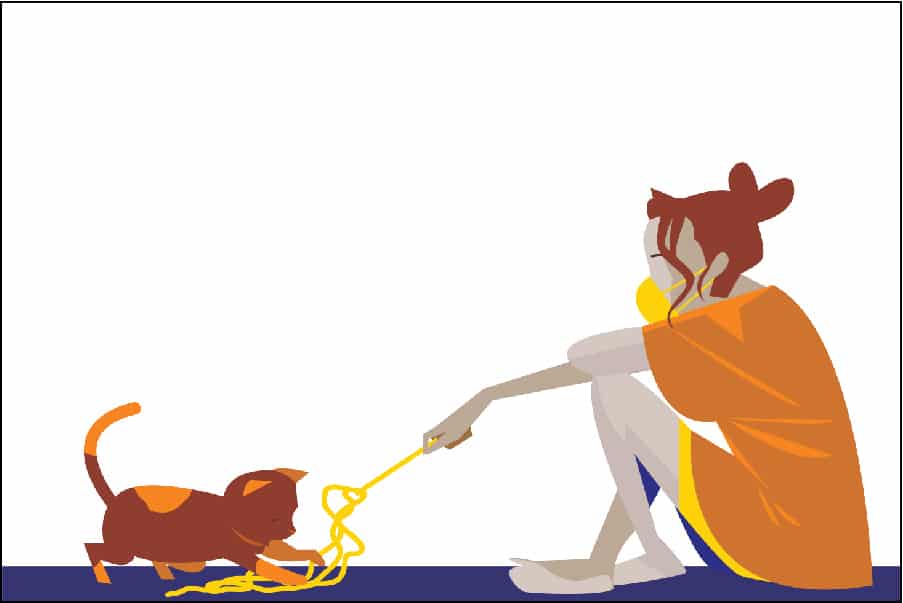 People often use a lack of time as an excuse to not adopt a pet; however, increased time at home during quarantine has caused some people to rethink their reason for not adopting a pet sooner, like senior Raissa Ames.

“I live alone, and I love living alone, but it’s just nice to come back home to another living, breathing thing to keep me company,” Ames said.

Ames grew up in a house without pets but has grown to love them — particularly cats — even more after spending time with the cats that her friends, like senior Kylie Allen, own. Ames said this helped her make the decision to adopt her first cat.

“I think the pandemic made me realize having a pet can make lonely days of quarantining feel not lonely at all,” Allen said.

Ames spent a lot of time with Allen and her cat before deciding to adopt. Ames said she saw her now-adopted cat on a social media post from a local shelter, and immediately fell in love with it.

In an April 24, 2020 report from the Associated Press (AP), adoption of pets during the pandemic has more than tripled since March 2020. One New York shelter reported going from 140 adoptions a month to 3,000 within the first two months of quarantine.

“I decided to adopt her because there are always animals that need a home,” Ames said. “And, also, the Humane Society in Searcy is really great.”

Both Ames and Allen are in their last semester in the social work program and on their way to graduate school. After working in their placements all day, they both said they love being able to come back to their furry roommates.

“I think that just living alone is lonely in nature, so I don’t think that being in quarantine exasperated that loneliness,” Ames said.

Even people who live surrounded by other people crave the unwavering love of pets while at college, like junior Katie Beth Sharp.

“Sometimes I just really want to be around an animal,” Sharp said. “I have had dogs my whole life, but I live in a dorm and six hours from home. So everytime I see a dog, I just want to run up [and] love [on] it.”

The aforementioned AP article said that there has been an outpour for the public need to have more affection. The idea of being able to interact with something in a time where most interactions have been decreased tremendously is well worth the work of having a pet.