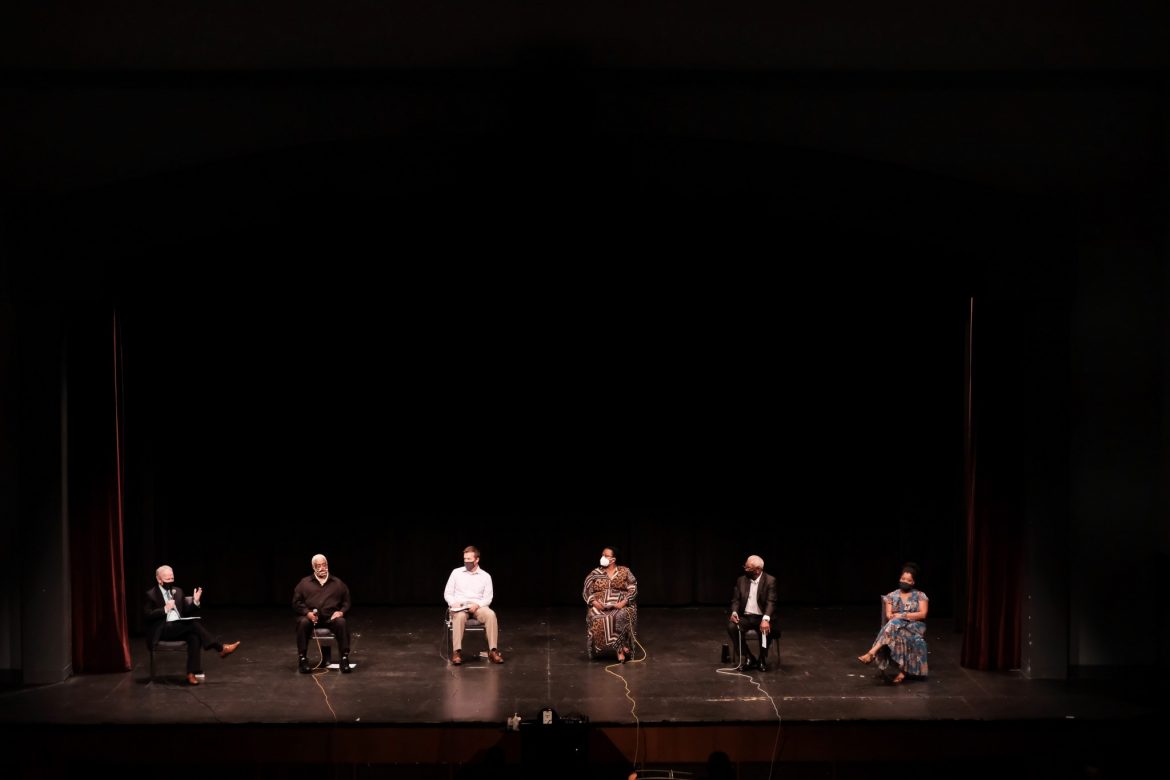 An audience limited to 80 people gathered in the Administration Auditorium. Moderators senior Morgan Proffitt, SA president, and senior Otis Idlebird, BSA vice president, facilitated the discussion by first asking the panelists questions that had been submitted prior to the event. The questions covered Harding’s history with race relations, improvements the University has made, as well as areas that still need improvement.

“A lot of progress has been made,” Wright said. “Of course, I think we all know more progress needs to be made. There is a beginning, and this kind of forum certainly presents that beginning.”

The panelists acknowledged that, while these conversations held potential to be tense and uncomfortable at times, that could not stop the conversations from taking place.

“The ability to speak candidly and openly and forthrightly about things that matter, even though it’s uncomfortable, even though, in some ways, there’s been a culture of being a little too afraid to offend … by being able to tell the truth, to possibly offend, but then being able to heal — I think is a powerful thing,” Cunningham said.

The first question, submitted by an anonymous participant, addressed ways the University is already supportive of the African American community. The panelists recognized the panel discussion, honoring Juneteenth this summer, and ongoing conversations throughout past years, among other events and discussions, as steps toward progress.

The discussion later touched on Harding’s history with race relations, which recently gained more attention due to alumnus Jackson House creating a petition to change the name of the George S. Benson Auditorium, shedding light on Benson’s resistance to integration during his presidency at Harding.

In response to a question asking how Harding plans to share the complete story of Benson’s history, something McLarty promised in a June 24 campus wide email titled, “On the matter of the Benson Auditorium,” Singleton said that Benson’s papers, found in Harding archives, show that Benson collected files to systematically discredit civil rights activists.

“In the year after Dr. King was shot, he published and widely promoted a piece that was very angrily against Black power that had a section mocking the ideas of Black history, so that’s part of the story,” Singleton said.

McLarty said when he initially thought about sharing Benson’s complete story, he had envisioned chapel discussions, installments in the auditorium and more conversational ways to explore his history. He said that as he received hundreds of comments throughout the summer and did research of his own, he learned of the complex nature of Benson’s life.

“I see this … as more of a process than an event or a moment,” McLarty said. “I still see it as more of a conversation among truth-seekers who bring out pieces of the story more than a statement that I make for others to critique. Let the conversation continue.”

The second portion of the event allowed any attendee to ask the panelists a question. Students asked McLarty about his decision to keep Benson’s name on the auditorium, despite the thousands who signed the petition in favor of changing the name.

Attendees also asked about more in-depth ways Harding has fought and plans to continue fighting racism as an institution. The panelists said that incorporating African American history and achievements into all departments of education is a crucial step to dismantling racism.

“We’re living in a system … that does not include us — never has,” Anthony said. “I hope that it will one day, but if it ever does, it’s going to start with us teaching our children differently.”

In response to a question asking what the University must do to improve, panelists said that being willing to admit when there is a problem, taking a stance that wants reconciliation and looking to fix the source of the problem are all crucial for improvement.

“I think our problem historically is that we fail to fight against wrong, even when we know what’s right,” Wright said. “We just need to do better moving forward. Let’s just stand up for what’s right, because when we are Christians, we’re standing with Jesus for what’s right.”