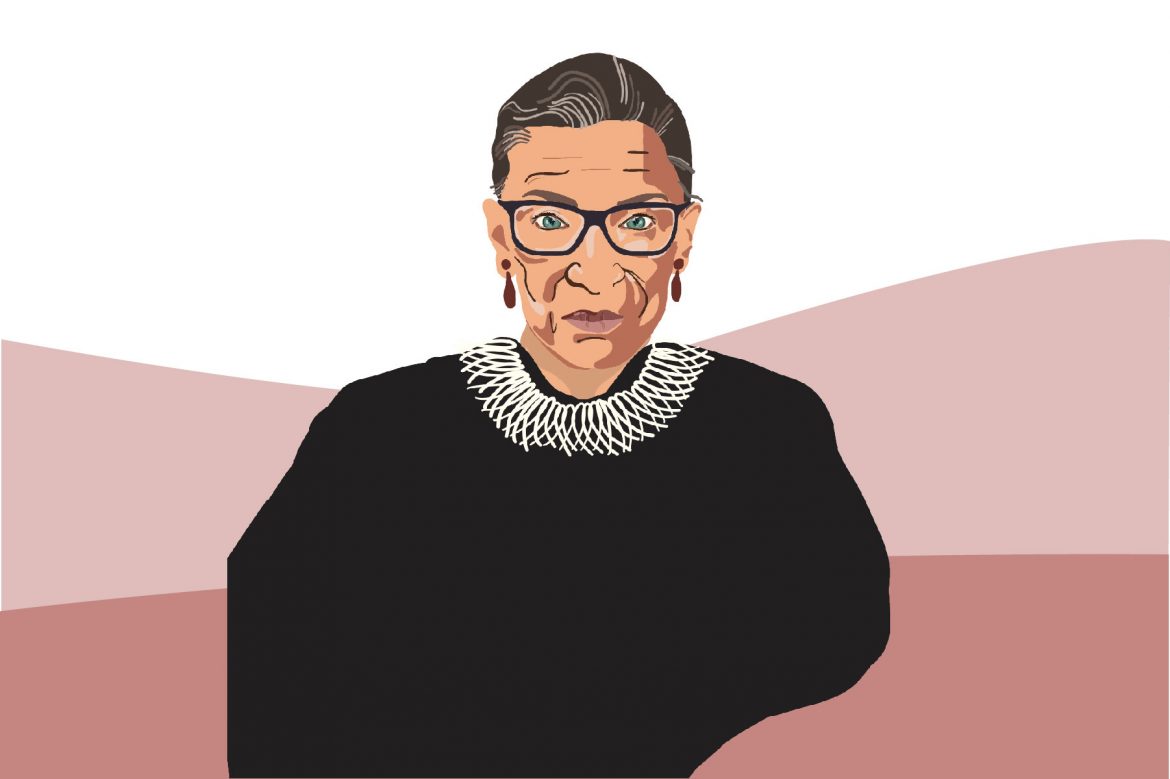 Justice Ruth Bader Ginsburg died in her home in Washington, D.C., Friday, Sept. 18. After battling several bouts of cancer, the Supreme Court said her death was caused by metastatic pancreatic cancer complications. She was 87 years old.

Ginsburg was the second female justice appointed to the Supreme Court and the first Jewish female justice. In her 80s, she became a cultural and feminist icon. Best known for her feisty dissents — and the various styles of collars she wore to denote her impending decisions — Ginsburg accumulated many endearing fans. In recent years, “I dissent” and “The Notorious RBG” (a nickname given to Ginsburg by a law student and the name of her biography), have frequented T-shirts and memes.

“I’m always a fan of any public figure who champions the care of disenfranchised Americans,” Dr. Jack Shock, distinguished professor of communication, said. “Justice Ginsburg will long be remembered for her work to level the playing field for all Americans, especially women.”

Throughout her tenure on the Supreme Court, Ginsburg was a prominent voice in favor of gender equality and workers’ rights. She wrote the landmark decision in United States v. Virginia in 1996, holding that the Virginia Military Institute could not refuse to admit women. She won the Thurgood Marshall Award from the American Bar Association in 1999, for her contributions to civil rights and gender equality. Two landmark Supreme Court cases in 2015 put her on many Americans’ radar: King v. Burwell (which upheld a component of Obamacare) and Obergefell v. Hodges (which made same-sex marriage legal in all 50 states). Ginsburg is considered to have been instrumental in the Obergefell v. Hodges 5-4 ruling.

For Dr. Lori Klein, assistant professor of history and political science, one of the most impressive things about Ginsburg was her longtime friendship with late Supreme Court Justice Antonin Scalia.

“They’re the sweetest example of what could be right in American politics,” Klein said. “She spoke at his funeral — it was a loss for her when he died.”

Although the two vigorously disagreed on most fronts, they were close friends for decades. They welcomed debate and difference in their friendship. The justices came from opposing sides of the political spectrum, yet rang in every new year together with their families since the 1980s.

Ginsburg lay in repose at the U.S. Supreme Court on Wednesday and Thursday. After a private ceremony for family and members of the court, the public was invited to pay their respects and say their final goodbyes. She will lie in state in the Capitol beginning Friday, Sept. 25 — the first woman to receive such honor. Ginsburg will be buried at Arlington National Cemetery next to her husband, Marty, on Tuesday, Sept. 29.

“I have never seen such an outpouring of support and gratitude after the death of a Justice,” Shock said. “Of course, a death happens rarely. I loved the expression of sympathy from both sides of the political aisle, even if some of the kind words only lasted one day before back to business as usual.”

Ginsburg’s death left an empty judicial seat, with less than 40 days until election day. Many Democrats said the Senate should wait until after the election to vote on a nominee. On Monday, President Donald Trump said he would name a replacement for Ginsburg by Saturday, Sept. 26.

“I think, in all due respect, we should wait until the services are over for Justice Ginsburg,” Trump said in a Sept. 21 interview with Fox & Friends.

Trump dismissed her final statement–– a wish to not be replaced until the presidential election is complete, as repoted by familiy. The president said he is looking at five potential judicial nominees. He only named two: Amy Coney Barrett and Barbara Lagoa. In 2018, Barrett was considered for the Supreme Court vacancy, which was filled by Brett Kavanaugh.

While the vetting process of nominees is typically slow, Klein said this process could go quickly. Unless the press digs up something new on his choice, Klein said most of the vetting has probably already happened — Trump was on the phone discussing his options nearly all weekend, CNN sources said.

The Senate currently has a Republican majority — so Trump’s nominee would likely pass the current Senate — but one-third of the Senate is up for reelection, and Democratic candidates in states across the country are ramping up their campaigns in an attempt to turn the tides. According to the New York Times, contributions to ActBlue totaled more than $160 million the weekend following Ginsburg’s death — a record-breaking weekend for the organization.