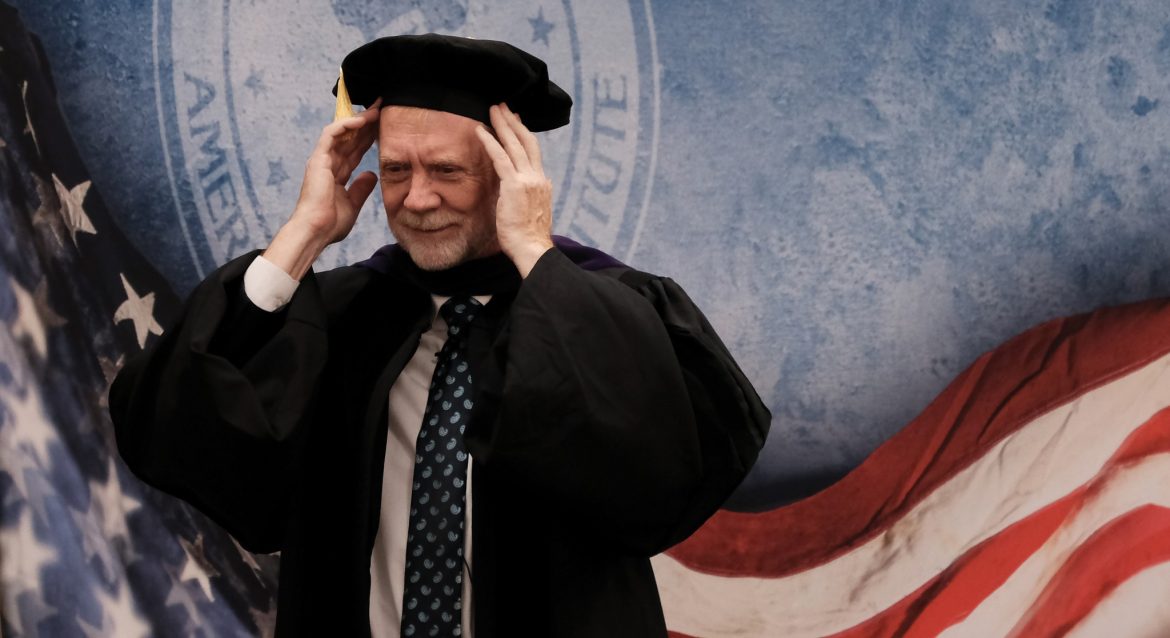 On Tuesday, Sept. 8, Harding welcomed alumnus Jerry Mitchell and Reena Evers-Everette to campus as the distinguished speakers for the first lecture event of the school year, co-sponsored by the American Studies Institute (ASI) and the Harding Honors College. Mitchell and Evers-Everette were originally scheduled to visit last March, but the event was rescheduled due to the COVID-19 outbreak.

The evening looked different from past ASI events, as guests were socially distanced in the Founders’ Room instead of the Benson Auditorium, and the evening was livestreamed for over 400 viewers via Facebook live. To ensure the livestreaming would be successful, ASI Executive Director Kim Kirkman secured a private hotspot through which to broadcast the event.

In the main presentation, Mitchell gave an overview of his investigative work in reopening cold cases from the civil rights movement, which so far has led to 24 convictions. Mitchell’s new book, “Race Against Time,” was published in February and gives a more comprehensive account of these exploits. Student moderators senior Namon Pope and junior Everett Kirkman then facilitated a discussion panel with Mitchell and Evers-Everette.To conclude the evening, University President Bruce McLarty awarded Mitchell with an honorary Doctor of Laws degree for his award-winning and nationally recognized work as an investigative journalist.

One of the most notable cases Mitchell investigated was the murder of civil rights icon Medgar Evers, which led him to become acquainted with Medgar’s daughter, Reena. The two are now close friends and even laughed in anticipation on Tuesday each time the other started to recall a familiar story.

Evers-Everette has devoted much of her life to continuing the work her father started through various education and civic engagement programs. Currently, Evers-Everette serves as executive director of the Medgar and Myrlie Evers Institute, which “pushes for positive social change, exchanges across generational lines, and social and economic justice.” Although she was only 8 years old when her father was killed, Evers-Everette said that his impact on her life has been immense.

“We might not have gotten a lot of time, but the time my father gave us was quality time,” Evers-Everette said. “He gave us instruction, which we thought was a game, but they were tools for survival.”

One of the central themes Mitchell and Evers-Everette reiterated throughout the night was the importance for truth and justice to prevail in our society.  Evers-Everette spoke to the transformative and healing nature of seeing justice finally prevail, even if much delayed, and Mitchell spoke to his personal inspiration and journey to seek out truth at any cost.

“As journalists, we’re trying to give a voice to the voiceless,” Mitchell said. “Tell the truth and let the chips fall where they may.”

The evening’s message was not lost on those present. Both students and faculty spoke to the inspiration Mitchell and Evers-Everette’s presence provided.

“The biggest takeaway relates to what Jerry said at the end of the night and that is, ‘We can make a difference; we can change the world,’” associate professor of communication and Honors College faculty fellow Dr. Jim Miller said. “That’s sort of dramatic, but the reality is that we have the ability, we have the resources, and we can make a difference in the lives of other people.”