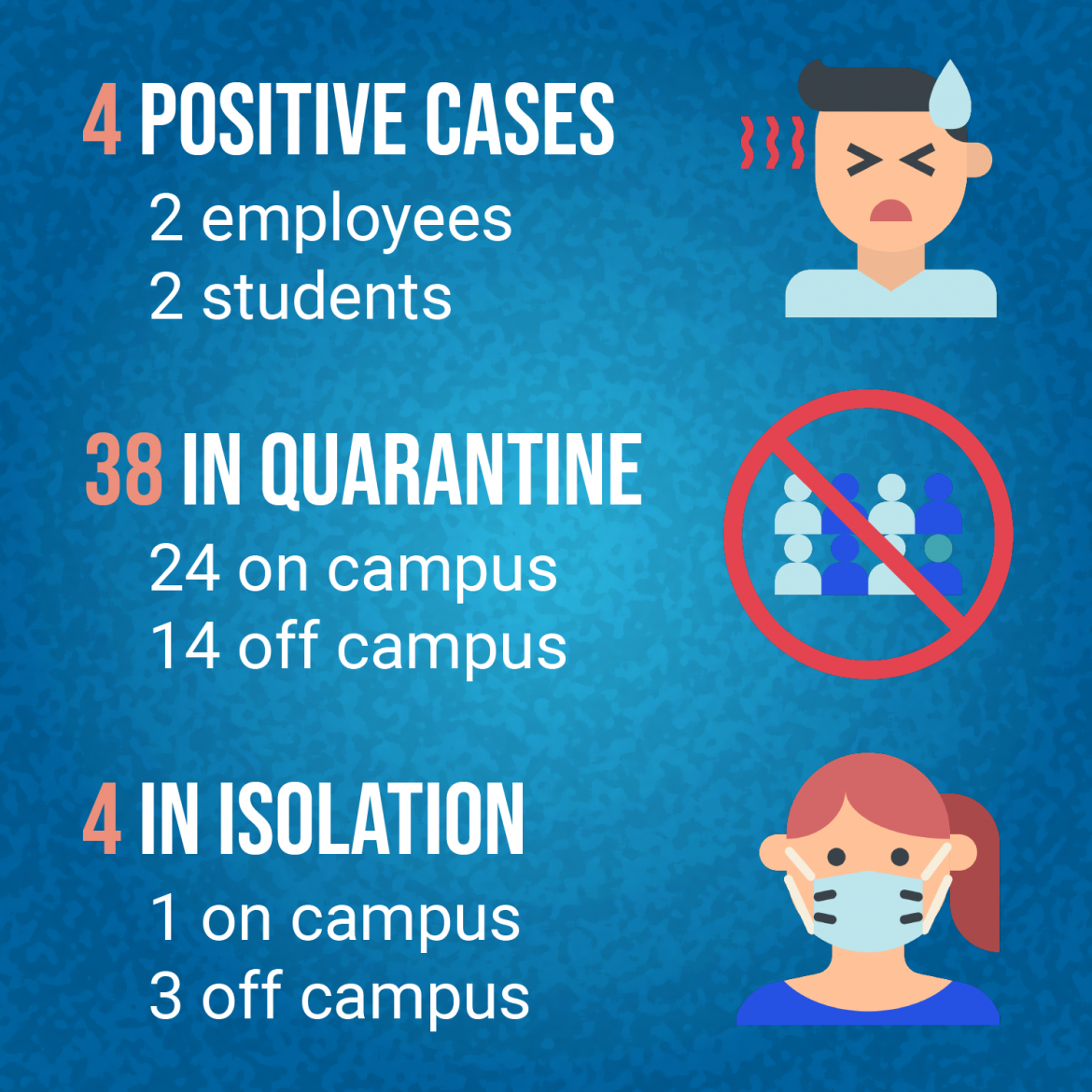 Harding administrators announced on Thursday four individuals tested positive for COVID-19 on campus. Two faculty members and two students tested positive and are in isolation as of Thursday, Sept. 10.

As of 5 p.m. on Tuesday, Student Health Services conducted a total of 24 tests. About 0.60% of Harding students and faculty on campus have received a COVID-19 test.

The percentage of positive test results is 12.5%. Eight test results were pending as of Wednesday at 2:13 p.m.

The COVID Task Force at Harding University, formed in April, set up a system to assist students who experience symptoms of COVID-19 — starting with a screening form for students to fill out, then having the students get tested and quarantining them on campus as needed.

As a strategy to identify individuals with COVID-19, the CDC suggested to “conduct daily symptom screening such as temperature screening and/or symptom checking for students, faculty and staff.”

In a living document approved by Gov. Asa Hutchinson and José R. Romero, MD, Secretary of Health, the Arkansas Department of Health (ADH) provided a guideline to focus on testing patients with symptoms if viral testing capacity is limited.

Harding’s COVID Task Force met for the first time in April and then met weekly throughout the summer to develop a system for screening, testing, isolating and quarantining on campus.

The Task Force was formed without any members of the current teaching faculty. Provost Dr. Marty Spears listed the members of the Task Force in a private interview. The names listed, not employed by Harding, were: Dr. Michael Justus, physician and Harding Board Member; Dr. Roddy Lochala, physician and Chief Medical Officer of Unity Health; Andy Goodman, president of Arkansas Independent Colleges and Universities; and Jonah Shumate, liaison with the federal government on Capitol Hill.

“When [the Task Force] decided we’re going to be six feet apart in classrooms, the deans started to say, ‘How are we going to make this happen?’” Spears said.

To implement regulations, the task force delegated responsibility to each department. Davis set up a screening system through a Google form accessible on Harding’s website and through Pipeline as the first step toward a process of potential testing, quarantine and/or isolation.

“People can complete that, submit that, and it generates communication to me,” Davis said. “And I can follow up by phone.”

The form communicates whether the student has symptoms or if there is concern of coming in close contact with someone who does have or is suspected to have COVID-19.

“It lets me sift through those different responses and figure out what really needs to be followed up in a testing bottle,” Davis said.

Davis, who has been a member of the health care community in Searcy for 24 years, said the White County health system does not have the manpower to handle mass amounts of testing.

“If our operation here can deflect some of that — if I can help screen — we can tap the breaks on that,” Davis said.

If after a phone call with Davis it is determined a test is needed, the student will schedule a time to be tested in the parking lot outside of the Student Health Services building in a drive-through model. Davis said she takes one or two trips every day to Unity Health to hand deliver specimens to be processed. Davis is the only nurse managing the testing at Harding.

Though the priority is to test when an individual has symptoms, Davis said she wants students who do not have symptoms and want to be tested to utilize the Student Health Services.

Davis said she would rather students go to Student Health Services than anywhere else, “and the reason for that is not my being controlling at all, it’s that we are going to get the fastest answer this way, and the University will know quicker.”

A system of procedure was set up for when test results are pending and after the results come in. Neal, as the Harding contact for the Arkansas Department of Health (ADH), said he and Dean Chad Joice attend a weekly meeting, Fridays at 11 a.m., with representatives from the ADH and the University of Arkansas for Medical Sciences (UAMS).

The meeting is so “each University knows how to report students, faculty and staff that happen to test positive to the coronavirus,” Neal said.

He said the meeting helps provide awareness to whoever has been potentially affected by a COVID-19 test, so they can be quarantined properly. While test results are pending, Neal said, the one being tested as well as those considered close contacts are to remain in their place of residence.

“It’s a three to seven day result,” Davis said. “But I am consistently getting results in eight to 12 hours.”

In the result of a positive case, the individual who tested positive is moved into isolation, and close contacts are moved into quarantine. The task force has prepared 49 rooms in Kendall Hall for isolation, 50 rooms in the Heritage, 13 units of Village apartments and 52 dorm rooms for quarantining. Neal said students moving home could also be an option.

The point at which the University would look to make the decision to go completely online, Spears said, is if the University could no longer accommodate the number of individuals in need of a place to isolate or quarantine.

“The option would be made available to stay,” Neal said. “We definitely would provide the opportunity to remain here or go home. It would definitely be a case-by-case basis.”