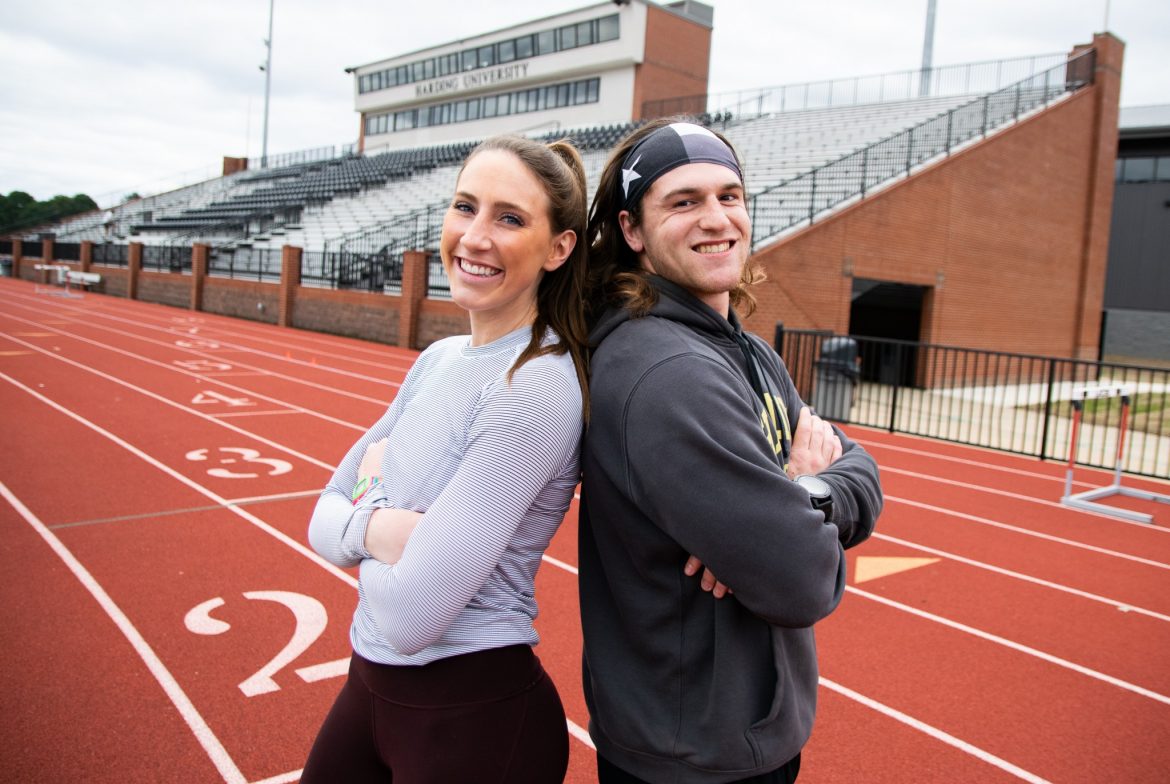 Juniors Matt Hipshire and Darcy Sanford broke Harding’s records for the heptathlon and pentathlon at the Missouri Southern State University Multi Meet Feb. 8. Because these events are not hosted as regularly as other track and field events, the double broken records come as a big win.

The heptathlon is a men’s multi event that lasts two days, consisting of 100-meter hurdles, high jump, shot put and 200-meter sprint on the first day and long jump, javelin and 800-meter run on the second day. The women’s multi event is the pentathlon, which has 60-meter hurdles, high jump, shot put, long jump and 800-meter run.

Sanford broke the pentathlon record with 3,069 points last year but did not have the opportunity to compete and break it again until this year, so she was eager to find out what she could accomplish.

“I love the opportunity every time I get to do the multi to rise up and be a champion and pull the best out of myself,” Sanford said.

This time around, Sanford surpassed her previous record and scored 3,327 points, breaking the record and putting her at 21st in the nation for the pentathlon.

Similarly, Hipshire scored 4,701 points in the heptathlon, putting him in first place and breaking the previous Harding heptathlon record of 4,539 points, set by Matt White in 2007.

Hipshire and Sanford said track demands a lot of hard work and dedication from athletes, but especially from those who compete in the multi events. It requires them to be well-rounded athletes and to have a wide range of skills. Assistant track coach Jessica Withrow said they want their athletes to be as technically strong in each event as possible, so they usually train for around four hours a day.

“It is just a combination of a little bit of everything, and so it really tests you and your athleticism,” Sanford said.

Hipshire and Sanford both said they enjoy many aspects of track, especially the challenge the multi events offer.

“For me it’s just kind of like my stress release and just a way to take a step back from the day,” Hipshire said.

Withrow said Hipshire and Sanford were in a good spot and they scored exactly what she thought they would, so she is hopeful that they will succeed moving forward and that their accomplishments will push them toward qualifying for nationals.

“When they competed in this multi, I was jumping up and down and just as nervous as they were,” Withrow said. “I’m very thankful that I still get to have those moments where I’m still excited and pumped up even though I’m not competing.”

Hipshire and Sanford said they are excited to compete at their upcoming meet and see what they are capable of achieving.

“With being so close and being ranked nationally, I’m starting to realize more and more that I can do this,” Sanford said. “I’m super close to getting into nationals, so it’s definitely pushing me to have bigger dreams and bigger goals.”