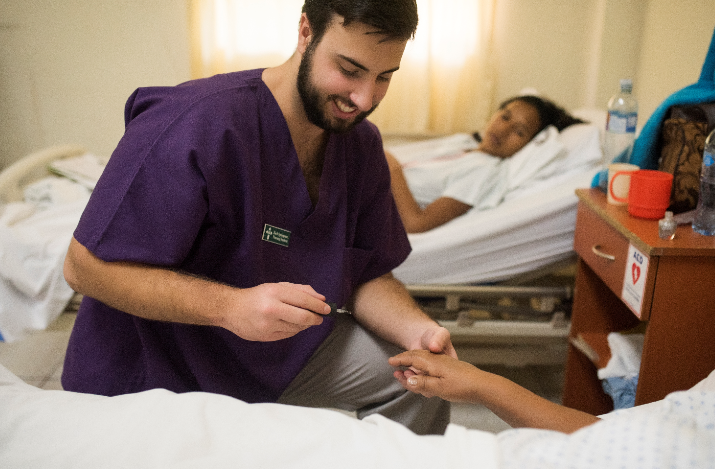 Working in pairs on eight-hour shifts, the nursing students walked the floors with patients, monitored vital signs, offered assessments and observed surgeries. Each student oversaw the care of three to five patients under the supervision of a registered nurse.

In Guatemala, the group was focused on gynecologic and plastic surgery. Senior Ally Davis said the surgeons performed hysterectomies and repaired cleft lips and prolapsed uteruses. Davis said the clinic was more technologically advanced than she expected but had limited resources compared to U.S. clinics and a clinic sterilization team so items could be reused.

“The medications are more limited down there, while we have more options here, but we had everything that we needed,” Davis said. “Something that is different is you tried to be less wasteful. I mean, whereas some things wouldn’t be reused here, they reuse them there.”

Senior Addison Moulton said the nursing students sometimes had to be creative to get patients to follow directions. She said one of her favorite moments was when her patients were reluctant to get up and walk as they needed to but ended up dancing after the students began playing music on their phones.

“They were teaching us to ballroom dance. And so, we were dancing up and down the ward for like literally four hours. We did what we needed to do, and we were having fun while we were at it.”

While traveling abroad, the nursing students studied and watched recorded class lectures in their free time in order to maintain their coursework as classes continued in Searcy. Moulton said the students returned Saturday, Feb. 15, with a test in class the following Monday. Despite being offered an extension, Moulton said most of the nursing students chose to take the exam on the scheduled day.

“We carved out little amounts of time every day, and as many of us who could, who weren’t working, we sat down, and we reviewed — we watched the class videos, we took notes,” Moulton said. “And then in the airport, we stood around in a circle, and one of us quizzed the whole group.”

Rick Harper, a mission director for Health Talents International, said the organization supports clinics abroad and partners with Christian colleges all over the country to fill the medical teams. Two teams will visit Guatemala during Spring Break. One team will take Harding nursing students to Chichicastenango, Guatemala, to serve with a mobile medical and dental clinic; the other team partnered with Abilene Christian University to send students to Clinica Ezell.

“The next trip is my favorite, because it’s the most biblical,” Harper said. “It’s optometry and orthopedics, so the lame walk, and the blind see.”