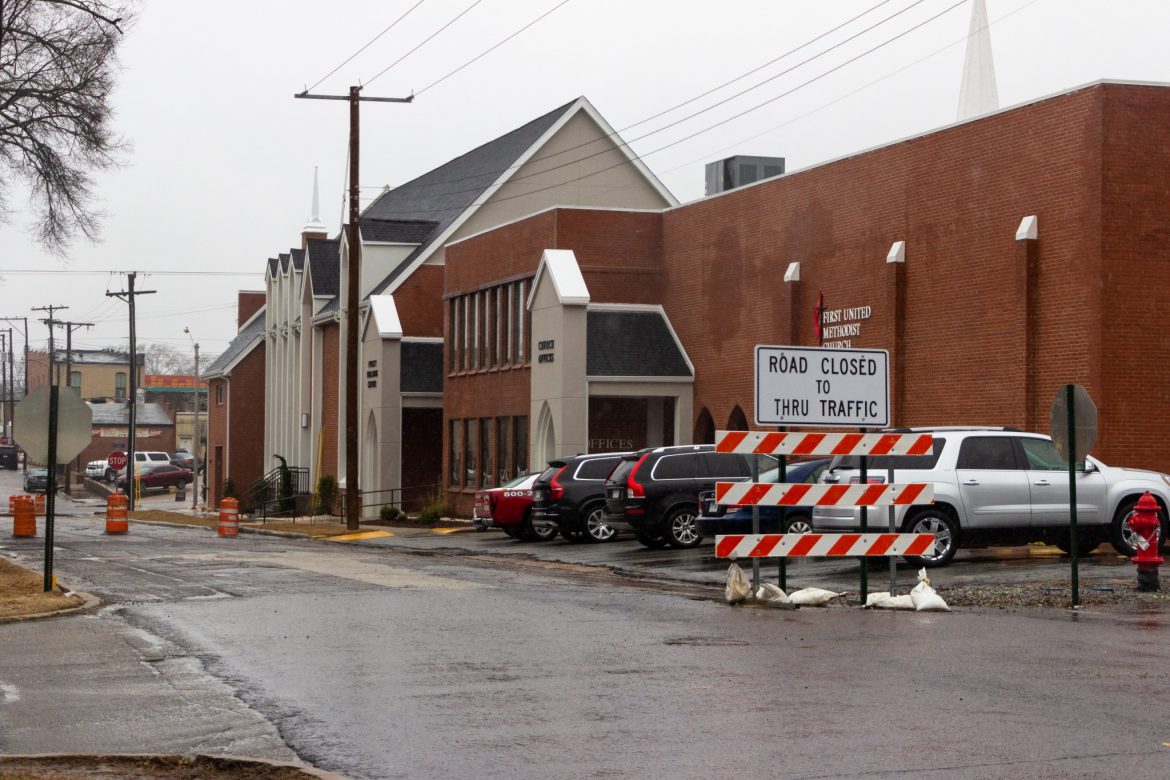 From Locust Street to Main Street, Market Street stands closed to traffic Feb. 12. Construction on this portion of the street began over a year ago, and city council voted to close it permanently Feb. 11. Photo by Ryann Heim

Searcy City Council voted on two major issues Tuesday evening. They authorized the approval of privately funded signage discouraging panhandling in Searcy and the closure of a portion of East Market Avenue from Locust Street to Main Street.

Panhandlers are individuals asking passers-by for money on the street, oftentimes holding written signs. However, the city council voted to allow the public discouragement of this act. According to Searcy Mayor Kyle Osborne, willing individuals can now purchase privately funded signs discouraging panhandling and littering to be displayed on city property, though not state-owned property.

Searcy Chief of Police Steve Hernandez said he hopes community members will heed the signs’ advice and not give money to people asking for it on the streets.

“They’re tugging on your heart strings, they’re doing certain little things, and Searcy is a very giving community,” Hernandez said. “That’s what’s really hurting … Some of these people go to nicer places than the people that are giving them money. They get in nice cars and drive away. They’re pulling a lot of money … I hate to see the people of Searcy give them money for them to go buy lottery tickets. Give it to an organization that actually provides.”

Some community members expressed concerns about such a ruling being unconstitutional.

“I think they have no way to enforce it,” junior Maci Pike said. “Also, it goes against constitutional rights … Essentially, I don’t think they can enforce that, and I don’t think it’s right.”

In an interview with HU16, Dr. Jim Miller, associate professor of communication, clarified how this may or may not be an issue.

“This is a first amendment issue, but as I understand it today, this is not an issue where the city is banning panhandling,” Miller said in an interview with HU16. “Such an ordinance would likely be constitutionally suspect based on a 2015 Supreme Court ruling in Reed v. Town of Gilbert. But this is an issue about the city allowing a privately funded sign to be posted on city property. That is a different issue entirely, involving issues like content neutrality, etc.”

The council members voted unanimously Tuesday to approve the implementation of these signs within the city of Searcy.

Council member Don Raney raised concerns about emergency vehicle access with Market Avenue’s closure. After a public forum and discussion amongst the council, however, the council members voted five to three in favor of closing East Market Avenue, from Locust Street to Main Street, permanently.