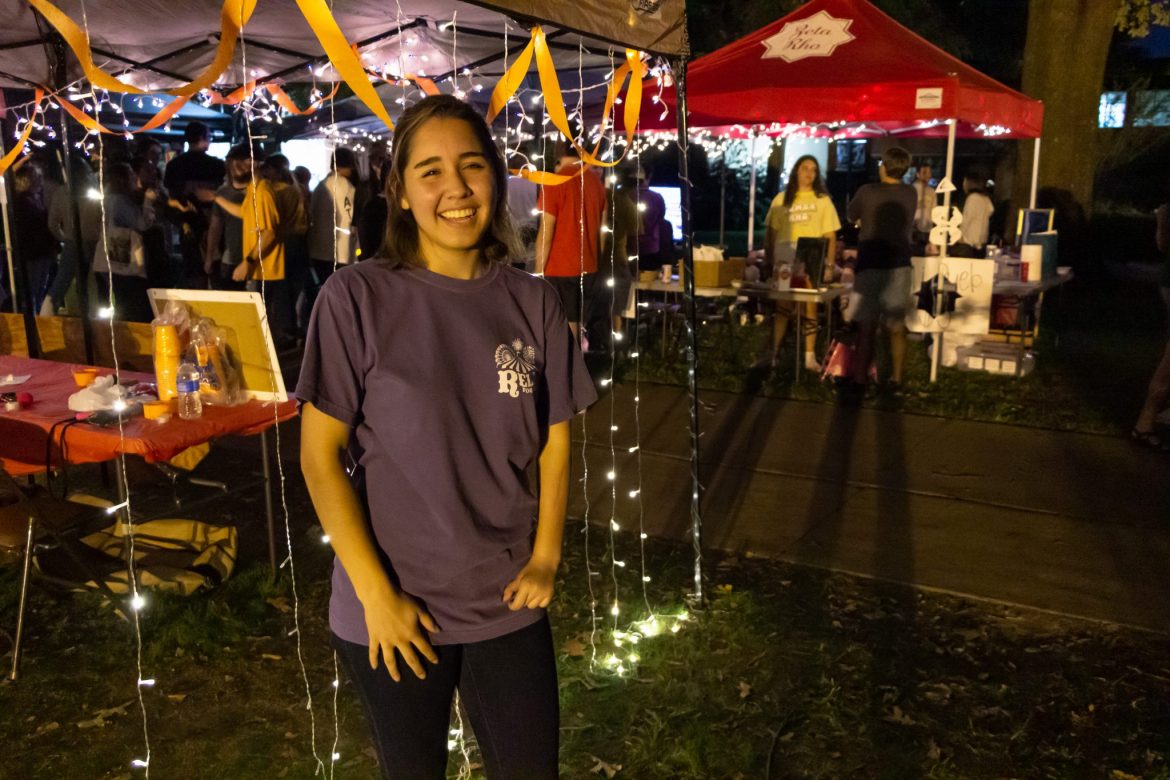 At Relay for Life on Oct. 4, Harding University honored cancer survivors — students and non-students — by shining a light on their experiences and faith in God throughout their lives.

Cancer is prevalent in everyone’s life one way or another, and it has affected many students at Harding.

William Brannen, 24-year-old graduate student at Harding University, conquered lymphoma, a cancer beginning in the immune system, that can spread throughout the body. Brannen was diagnosed at the age of nine.

“I was just very sick all the time,” Brannen said. “I slept all the time because I did not feel healthy enough to do anything.”

Brannen underwent chemotherapy for about one year. Brannen and his mother traveled from their home in Pensacola, Florida, to Birmingham, Alabama, where his doctors were located.
At the age of 11, Brannen was in remission. He said experience helped him see God’s presence in every situation.

Sophomore Makyla Oviedo-Rodriguez was diagnosed when she was one year old with neuroblastoma, a cancer often found in the adrenal glands. She was in remission shortly after treatment and then relapsed at the age of two. She had the cancer removed and went back into remission that same year.
Oviedo-Rodriguez has been cancer free ever since, and has been told by doctors that this specific cancer will not come back. Due to the critical condition she was in as a baby, she still suffers from anxiety and fear of more bad news or a new cancer surfacing.

Oviedo-Rodriguez’s mother, Malina, said she was told by doctors that it was unlikely her daughter would make it.

“She was holding me, and the doctors told my mom to hold me tight because the chances of me making it were slim to none,” Oviedo-Rodriguez said.

Oviedo-Rodriguez believes her recovery was a miracle from God and lives her life for Him every day.
“I am going to give the life God gave me back to Him,” Oviedo-Rodriguez said. “I am so thankful to still be breathing and still be able to serve Him and love Him and love those around me.”
Junior Aric Anderson watched as his father, Michael Anderson, battled papillary thyroid cancer.
According to Aric, his father was experiencing memory issues around August 2018, and it began to worry him. He first got an MRI, and the test came back showing a pituitary tumor in his head that was not cancerous.

Michael had more tests run and his endocrinologist found concern near his thyroid area. Tests came back, and he was diagnosed with papillary thyroid cancer.

“When you are sitting in a doctor’s office and the doctor looks at you and says, ‘I have seen this many times and I have never been wrong. You have cancer,’ it affects you,” Michael said. “You regret not doing things and you also regret doing other things. You want your life to be different, but you do not know how long you have for your life to be different.”

During Thanksgiving break in 2018, Michael was quarantined in his own home, unable to touch or come in close contact to anyone after taking an iodine pill in hopes of beating his cancer.

Aric said that their family is very close, and makes it a point to pour love into each other constantly.

“My parents have told us that they love us every day,” Aric said. “That — being something I was not able to get — really hurt, and not knowing if I was ever going to be able to hear that again was really scary.”

Michael said his experience deepened his connection to people through prayer.

“When I sit and I pray for somebody and hold their hand and they have cancer, that is a deeper prayer than it was before,” Michael said.

What it means to be southern: English professor releases a new book