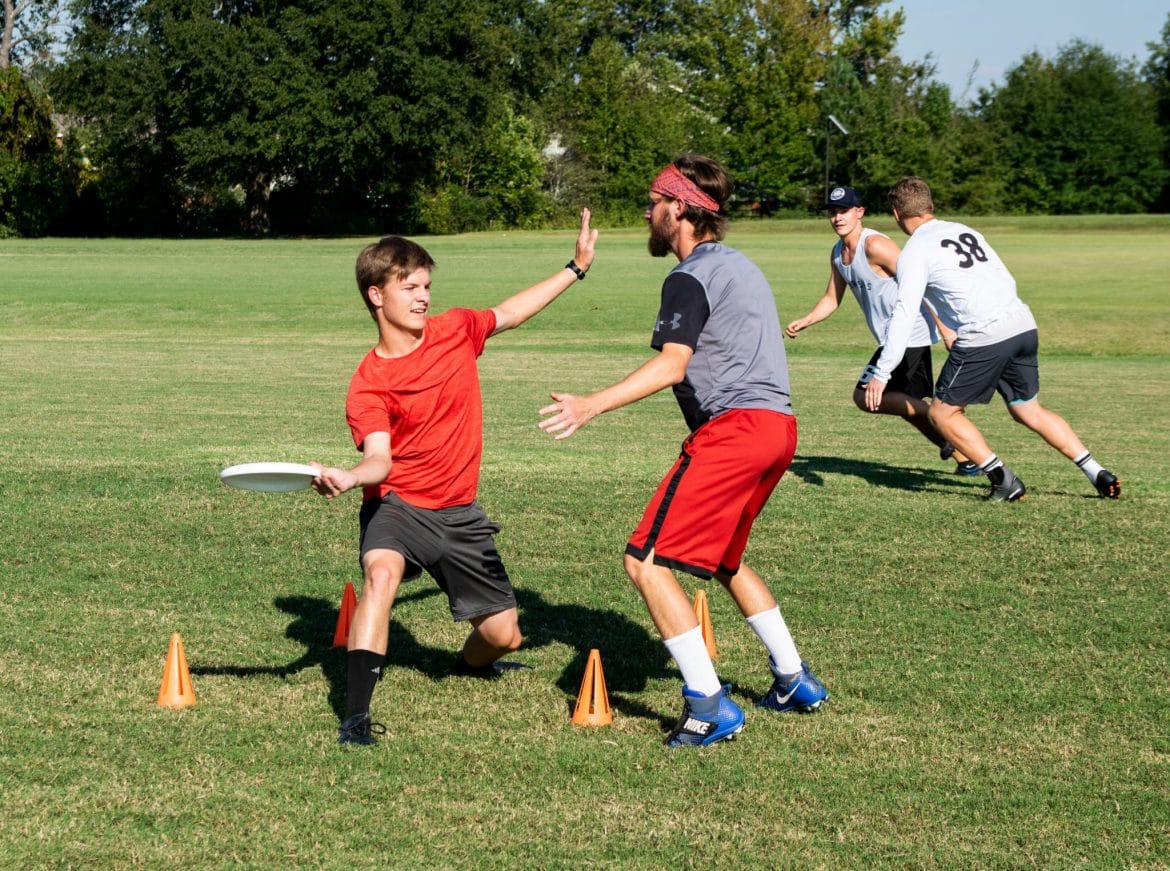 While the Harding University Apocalypse ultimate frisbee team is not an official University team and has no formal tryout or recruitment process, the team plays at a competitive level across the country against teams from NCAA Division 1 schools. The team will head to Nashville, Tennessee, this weekend to play in a tournament at Vanderbilt University.
According to junior frisbee player Andrew Rardin, since players do not have to try out to play with HU Apocalypse, most teammates have little previous frisbee experience. He said the lack of formal ultimate frisbee training most freshmen players have allows the rookies to grow together as they learn the sport.
“When someone comes in as a freshman or sophomore — a rookie on the team — I think it’s really cool that they all start at the same place,” Rardin said.
Senior co-captain Nick Meehan has been on the team four years. As a leader, he works with his co-captains to plan practices. As they prepare for the season, the captains focus on equipping new members with the skills they need to compete.
“We have introduced the rookies —
the new members — to the team, and we are planning practices accordingly so we can teach them the things that they need to know,” Meehan said.
According to Meehan, the team plans to attend three or four tournaments this semester. The fall semester is considered preseason, and the team’s performance in fall tournaments will determine their rank for the spring.
Meehan said he is hopeful for a successful season, and he predicts HU Apocalypse will shine at the tournament in Nashville this weekend.
“I think we have a good chance at doing very well,” Meehan said. “We’ve done very well previous years, and I really like the way that the team looks. Now I think we have a good set of rookies who are eager to play … and our juniors and sophomores are also very well-versed.”
Unlike the 18 sports in Division II that Harding sponsors, the Apocalypse frisbee team has the opportunity to play against teams from Division I schools. According to Meehan, Harding has had success in those competitions, beating Ole Miss last fall.
“Harding never fails to give [Division I teams] good competition, and sometimes we come out on top, and sometimes we don’t, but no matter what, it comes out to be a really good experience,” Meehan said.
Junior frisbee fan Delaney Hill said she regularly attends tournaments to support the team. She and others stand on the sidelines of the field during games and cheer for the Apocalypse.
“It’s like basketball where you’re very in it,” Hill said.“You’re on the sidelines, but you’re also part of the game.”
Practices take place twice a week with two additional pick-up games on Tuesdays and Saturdays.
Those who are interested in joining the team or would like more information can contact Meehan at nmeehan@harding.edu.

Winning on and off the field