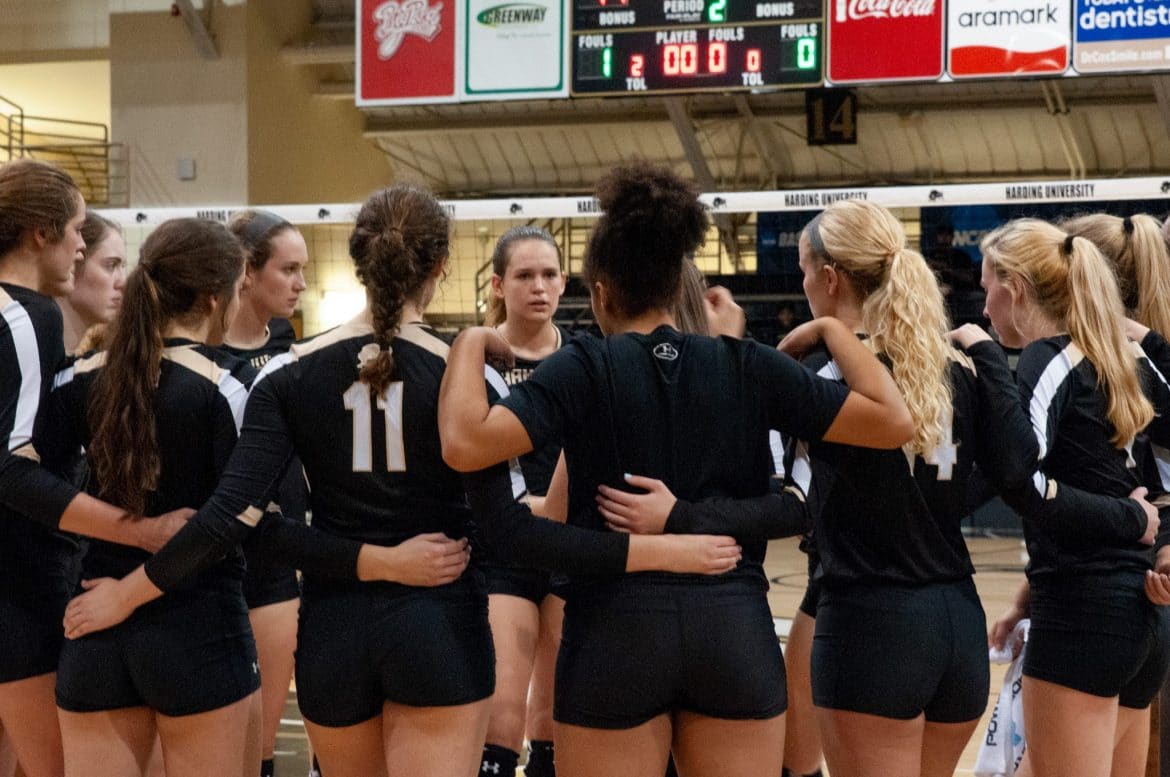 The 2019 Harding Volleyball team is comprised of 16 players, 8 of whom are freshmen.
Jazmyne Johnson, Harding volleyball graduate assistant, explained that one of the most important aspects of working with freshmen is getting them acclimated to college ball. Johnson reminded that it takes time for student athletes to learn a balance between academics, their sport, a social life and everything else that comes along with beginning college. Finding balance on the court is essential as well.
“Everyone is at the same level at this point, it’s just getting them to play as one,” Johnson said.
The team is beginning to establish their personality and reputation as they finish week four of their season.
“The first few weeks have been really fun and exciting,” Freshman team member Libby Hinton said. “We have played some really good teams this year that have pushed us to play our best.”
Head Volleyball Coach Meredith Fear, said she was excited about the young players and the potential they have.
“The consistency we are still missing, but they definitely have the drive, willingness, and readiness to play,” Fear said.
The new team is working diligently under the leadership of their coaches to achieve consistency, and Fear said they are establishing a deep bond with each other. Different players have stepped up in different games to help the team.
“We don’t have a starting line up, or starters … but it’s also great because anybody can go in at any moment and feel like they are a part of it,” Fear said.
Johnson and Hinton agreed that the team is flexible and good at working together.
“Almost everyone on the team has multiple positions that they can play, so it gives us an extra edge against our competitors,” Hinton said.
Though the absence of starters is unusual, the three appeared to agree that it has turned into somewhat of an advantage.
The players adaptability proved true when one of their few juniors got hurt in the first few weeks. Two freshmen, Hinton and Kelli Mckinnon, had to pull into the middle positions because of this injury, and according to Fear, have done so with grace
“The freshmen we have are ready to compete today,” Johnson said. “Coach Fear did a great job of getting players that are ready to make an impact.”
Coach Fear said she is excited for freshmen players to experience big moments. In the match against Ouachitau Baptist on Sept. 26, as it was tied 13-13 in the fifth match, Coach Fear realized the junior libero was on the court, but the rest were freshmen. Here was a chance for them to have a big moment and gain wisdom from that moment for the future.
“While I think we can do bigger, better things in the big picture, in the small picture where we are still trying to figure that out, it feels uneasy,” Fear said.
She said she feels confident in her teams’ ability to gain the needed consistency, however.
The Harding Volleyball team is currently 9-6 overall and 2-2 in conference play. The volleyball team’s next game is Tuesday, Oct. 8, at home.