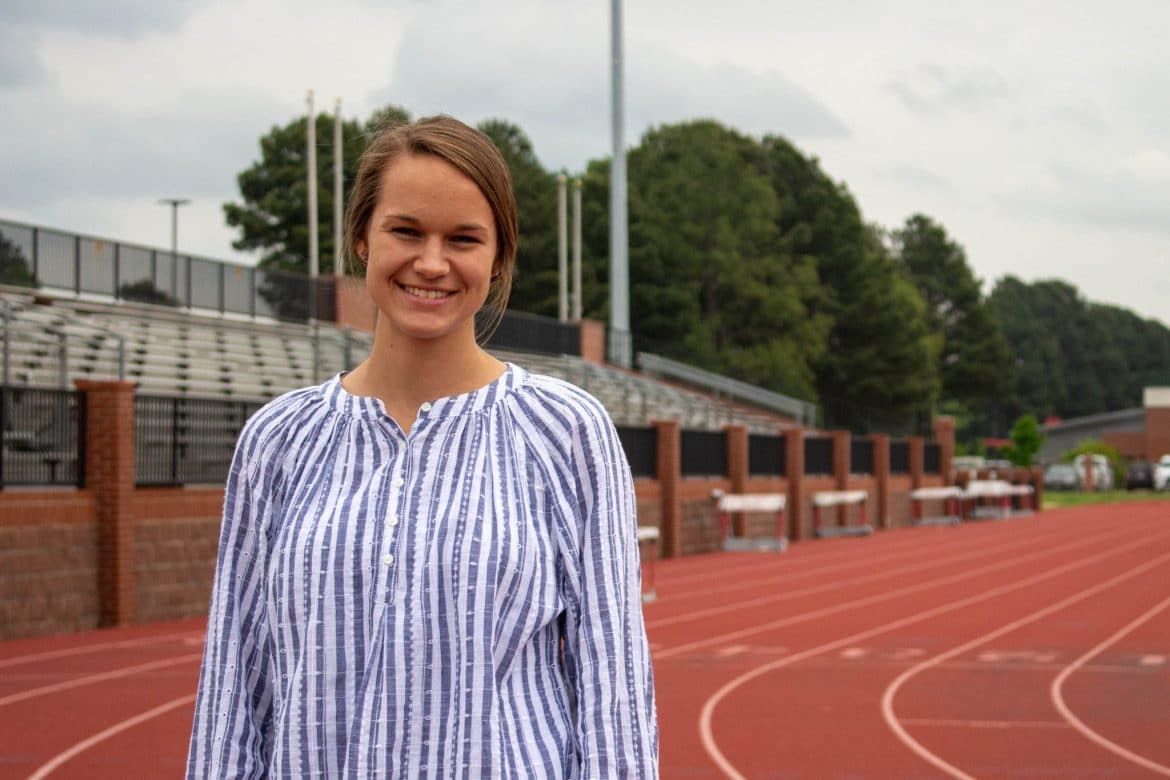 With a new ring on her finger and trophy in her hand, Harding junior Emily Shell found one April weekend to be quite eventful.

On April 19 and 20, Shell and the rest of the Lady Bisons Track team competed in the 2019 Great American Conference Women’s Track and Field Championship.

Among other successes, Shell was the heptathlon champion, a track and field combined contest made up of seven events.

Shell said she was excited to place first in the heptathlon. She also broke the school record and set the meet record for that multifaceted event.

“Coming in on Friday, I was placed in eleven events – I counted the heptathlon as seven individual events … and I ended up having a personal best in four of those seven events,” Shell said.

Shell also placed third in the triple jump at 37 feet, 11.25 inches, breaking a 30-year-old school record by an inch.

“I was tired and had just done 10 events prior, but with each jump I got a little bit further,” Shell said. “On my last jump, I went way farther than I had, and beat the best that I had done before by a foot and a half.”

Shell set many personal records during the two-day event.

Senior teammate Kaylin Turley has run with Shell since 2016 and also competes in the heptathlon for the track team. Both Turley and Shell are math majors who love to run.

These similarities have made the two competitors and close friends. Turley said that she is proud of Shell and happy for her.

“Because we’re so similar, we also compete hard against each other and push each other a lot,” Turley said. “But because we’re best friends, we’re also each other’s biggest fans. … I’ve loved competing with her.”

After the successful track meet, Shell spent time enjoying the company of friends and family. Her record count was not the only thing that grew over the weekend; so did her family.

On Sunday April 21, Shell got engaged to junior Charlie Collins at Camp Takodah.

Shell said she had talked with Collins about getting engaged but he had made her think it wasn’t going to happen until this summer.

“I had gotten her mom in on it too, and her mom called her that day and asked ‘When are we going to get together with Charlie because he hasn’t asked us the question [for permission to marry you] yet?’” Collins said.

“We both worked at Camp Takodah together in 2017, and that’s where we got to know each other really well and built a foundation for our relationship,” Collins said. “On one particular day that summer, we got to walk up to the bluff and spend some time together.”

On Sunday, the couple returned to Takodah Bluff, and Collins proposed.

“We were looking out over the bluff and he got down on one knee … it kind of felt like a movie,” Shell said.

The couple said the day was filled with a lot of nervousness, peace and happiness all at the same time.

“Somebody asked me if I was dorky or romantic, and Emily responded by saying ‘all of the above,’” Collins said.

From the track meet to the engagement, Shell said that she has had a weekend “full of really good things.”