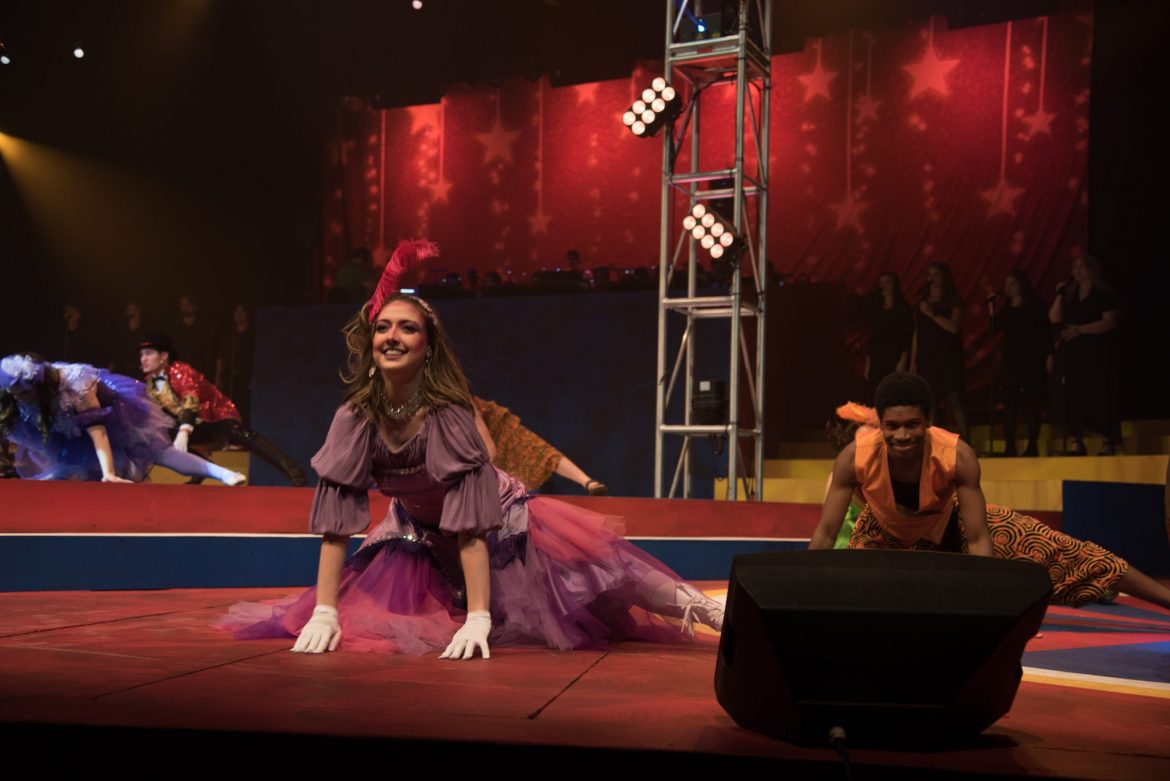 “I got strep throat and I ended up running a 103, 104 fever up there on stage … Of course, we were in those fleece onesies with wigs and hats and gloves and knee-high socks, and so at the end of every single performance, I would sprint outside and collapse on the ground. A public safety officer would sit there with an ice chest to dump on me … and he’d have an oxygen tank sitting there with a mask ready to give to me until I could breathe and get back up again.” – senior Sara Roibal, women’s social club Sigma Phi Mu member, 2016

“During our first performance that weekend, the sound completely cut out. That moment was both terrifying and exciting, but we somehow managed to make it through the entire show without any music. It’s definitely a Spring Sing I will never forget, and looking back, it’s a hilarious freshman story I get to tell.” – alumna Ellie McLarty women’s social club Chi Omega Pi member, 2015

“I fell in front of all of Chi Sigs running from the inside to the back of the Benson in a time crunch for the next dance number … My right foot got caught in my left pant leg, and within a second,
I fell and hit my head on the concrete as all of Chi Sigs went ‘OOOOOOO.’ Through adrenaline and embarrassment, I got up, ran on stage and performed while thinking I was gushing blood … I got a concussion and an incredible black eye.” – senior women’s social club Ju Go Ju member, 2018

“One Spring Sing number included Renee Lindsay (now Wallace), and the hosts and hostesses rappelled from the ceiling of Benson onto the stage to the music of ‘Twilight Zone.’ Renee got her hair caught in the pulley and couldn’t get it out, and so we had to lower scissors to her with a string, and she had to cut her hair free.” – alumnus Jeff Hopper, Spring Sing host and hostess director 1982

“The screen [in front of the band] started swaying. It doesn’t sound that scary, but when there’s like a 30-foot tall wooden screen in front of you hanging from cables from the ceiling, it’s a lot more terrifying. … We had no idea what to do, and the theatre technicians were running around looking at it with clipboards like, ‘What do we do?’ … If it would’ve fallen backwards, it would have crushed all of us because it was that tall.” – senior Matthew Thompson, jazz band member, 2017

“We were evidently a little too rowdy on the risers … A few minutes in, you could feel it swaying a little, but never thought it would collapse. One minute we were singing and then boom we were down. I skinned my leg, but of course, the show must go on … We hopped right up and moved to a different spot and continued singing as if nothing ever happened.” – alumna Holly Ekkens, women’s social club Regina director, 1990

“I was singing an Elvis Presley song and doing Elvis-style choreography, when on the last note of the song, I lost my footing and fell down into the orchestra pit. I landed on the grand piano that Carol Trevathan was playing. Shocked, she said to me, ‘What are you doing down here?!’ The crowd was in a frenzy, and somehow I clawed my way back up on the stage and took a bow.” – alumnus David Slater, Spring Sing host, 1984

“[During dress rehearsal,] the whole side [of my costume] … just tears, so then I had 10 safety pins all down my shoulder and down my side, so I was very scared it would poke me every time … I just fake smiled down the slide [prop] every time like, ‘I’m about to die!’” – senior Sterling McMichael, men’s social club TNT member, 2016

“Freshman year, I decided to leave a Sharpie tattoo on overnight and woke up with my arm in a lot of pain … Probably not ink poisoning, but maybe some kind of contact dermatitis … It was really only painful that night, though my arm was a little tender the next day. I definitely washed the ink off as soon as I could the next time, though.” – alumnus Riley George, men’s social club Chi Sigma Alpha member, 2014

“I was lifted in the air [during my solo] and when I came back down, my shoe just perfectly landed on the stair that it clean swept the heel off, and I had to do the rest of the number kind of tip-toeing on one shoe because I had three-inch heeled boots on. There was just a huge chunky red heel laying in the middle of the floor for the rest of my number, and I just was praying that nobody would notice.” – junior Ava Galyean, Spring Sing hostess, 2018

“The hosts and hostesses introduced us, the music started, we started singing and [doing] our choreography — and the curtain remained closed. The band stopped playing, and we just stopped. Then, the curtain opened with all of us just standing there with a confused ‘what do we do now?’ My friend Greg Fraley yelled, ‘5, 6, 7, 8!’ The band started over and away we went.” – alumnus Gerry Smith, men’s social club Chi Sigma Alpha member, 1987