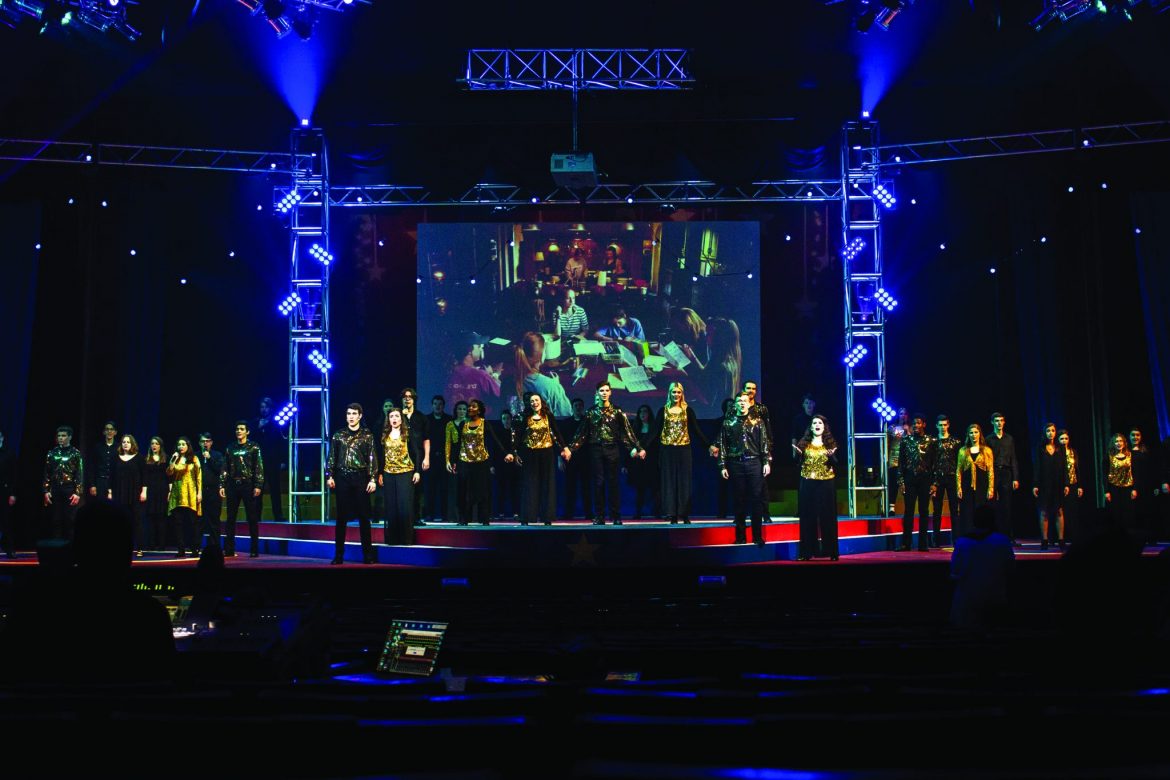 For the first time, the Harding University Chamber Singers are performing on the George S. Benson Auditorium stage during Spring Sing. | Photo by Loren Williams

For the first time, the Harding University Chamber Singers are performing on the George S. Benson Auditorium stage during Spring Sing.The highly selective group of 16 students joins the hosts and hostesses, ensemble members, microphone singers and jazz band for a powerful performance of “You Will Be Found” from the musical “Dear Evan Hansen” to close out Act I of Spring Sing.

While other vocal groups such as Concert Choir have performed in Spring Sing before, this is the first time Chamber Singers are participating. According to Kelly Neill, director of Chamber Singers, the opportunity to perform for a large audience will simultaneously be a positive experience for the members and increase exposure for the group.

“Chamber Singers is one of the best-kept secrets on campus,” Neill said. “This gives us the chance to sing for thousands of people whereas we usually sing for a hundred.”

Stacey Neely, who serves as the vocal coach and music director for Spring Sing, said she first came up with the idea of adding Chamber Singers to the show after coming across an arrangement of “You Will Be Found” last fall as preparations for Spring Sing were underway.

She ran the idea past Neill and Steve Frye, Spring Sing director and chair of the theatre department, and both were eager to make the performance a joint effort.

“The quality of their sound is really high-rate,” Neely said. “I thought it would add so much to what ensemble is already capable of doing and what they’re capable of creating.” Junior Megan Tidwell has been a member of both Chamber Singers and the mic-stand singers for the past three years. She said when the idea of joining Spring Sing was proposed to the Chamber Singers, she was fully on board and has not been disappointed in how the groups have joined forces.

“It just brings the two departments together,”Tidwell said. “I know we’re in the same building, both music and theatre, but we don’t get to interact very often, so it was really cool being part of both groups and getting to see them merge together … It’s really fun bringing two families together.”

This is sophomore Brooklyn Howard’s first semester as a member of Chamber Singers. She said the audience will not expect the vocal power of the combined groups.

The combined group of over 40 students sings “You Will Be Found” from “Dear Evan Hansen,” a Tony Award-winning musical. With lyrics such as, “Even when the dark comes crashing through, when you need a friend to carry you, and when you’re broken on the ground, you will be found,” the song carries a powerful message for many.

According to Neely, there will be limited choreography during the song so the audience can focus on the lyrics and pictures of the Harding community displayed on a video screen throughout its duration. Tidwell said she hopes the message the groups are trying to convey speaks clearly.

“The spotlight shouldn’t be on us,” Tidwell said. “It should be on Harding and the people that make up this beautiful community.”