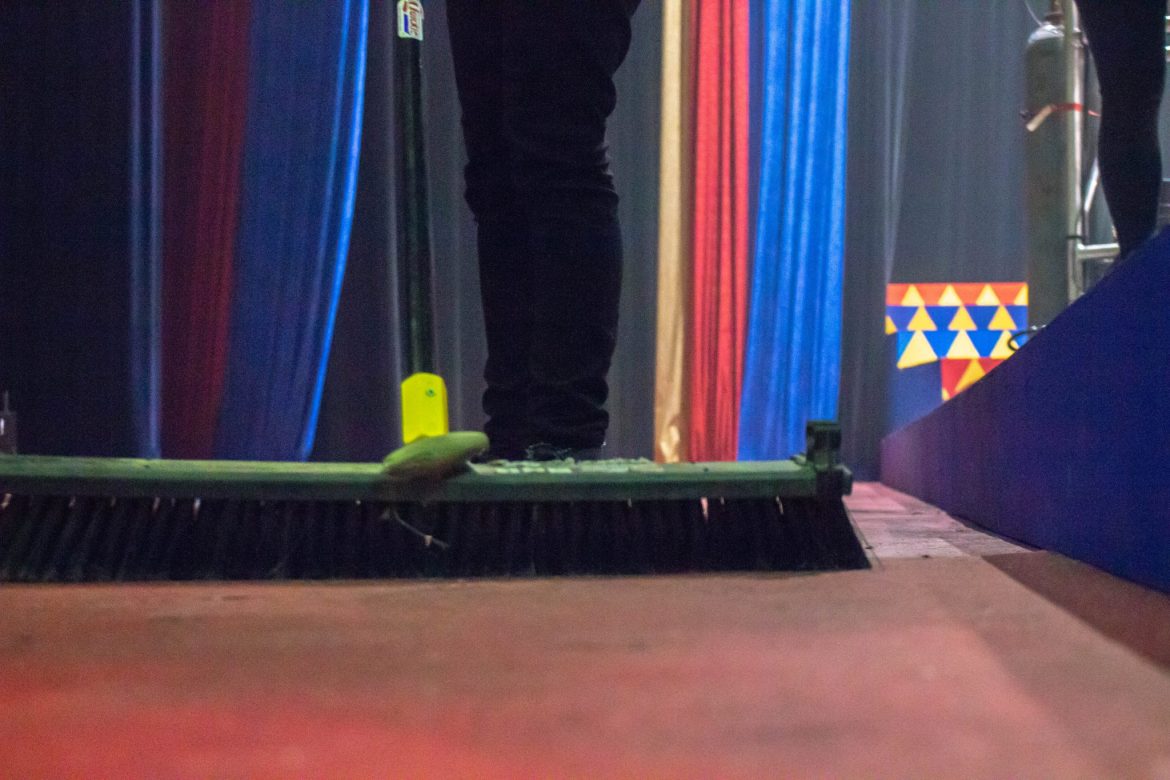 After the performers take their bows and the audience trickles out of the George S. Benson Auditorium, the night is far from over for the 10 students on the run crew who clean and prepare the stage for the next Spring Sing performance.

Assistant Technical Director Seth Fish said he and the crew reset the pyrotechnics and scenery and send abandoned items to lost and found. They pick up tickets and recycle programs, but he said the most difficult part is the gum. On days with two shows, they speed up the process.

“We say good job, high-fives all around, and then we go,” Fish said. “We hurry and clean, which gives us just enough time to go eat, and then we come back and finish preset.”

With two performances scheduled on Saturday of Spring Sing weekend, Fish said the run crew comes in around 11 a.m. and leaves between 11 p.m. and midnight.

Senior Levi Mason has been a part of the Spring Sing run crew since 2016, and after the last show, he said they also help the pyrotechnics and special effects technicians pack up their equipment.

“On Easter, we will wake up and have a fun little get-together that one of the faculty members hosts,” Mason said.

Then the crew starts strike, also known as tearing down the set.

However, Fish and the run crew have far more responsibilities than cleaning after the show. They also make sure the clubs get in and out of the building safely, but sometimes, props can get left behind during the action. Fish said he gives a talk on Super Saturday, the Saturday before Spring Sing when all the clubs run through their shows, to inform the performers that each club gets one free strike to leave something behind and have the prop returned. “After that, if they leave anything behind, I take it and I hide it,” Fish said.“The only way for them to get it back is they come and apologize to me and shameless bribery — a plate of cookies, a pan of brownies, a box of donuts.”

On average, he said most clubs are good about keeping track of all their props, but a club did break the system two years ago.

“One club left like eight props behind every night, and they brought us every form of sweet food,”Fish said. “It got to the point where we started asking for vegetables.” Between shows, clubs keep props and scenery in the pods behind the auditorium.After the last performance on Saturday night, Fish said he gives the performers Sunday and Monday to retrieve their belongings. On Tuesday, whatever is left in the pods belongs to the theatre department.

“They’ll leave behind props that we love to play with,” Fish said. “One year, a club left behind a bunch of trees, and so we took those trees, and we’re like running around on the front lawn, hiding behind trees, trying to scare people.”

The theatre department still has the trees, and they sometimes make appearances in productions. Junior theatre major Sydney Sanford started in spring 2017 with the build crew, which builds and paints the sets, during her freshman year. For the 2018 Spring Sing, she joined the run crew.
Last year, several members of the run crew took home pickaxe props from the mining show performed by men’s social club Gamma Sigma Phi and women’s social club Pi Theta Phi, and Sanford said they are hanging up in about half of their rooms.

“We played dodgeball with some of the balls that one of the clubs had left behind one year,” Sanford said.
She said the run crew is there to stay hidden but also to make sure the show goes smoothly. If something is complicated or someone is having a hard time, she said performers can ask the run crew for direction. “We’ll probably help you,”Sanford said.“My favorite part is just the helping.”

Dreaming Up the Theme