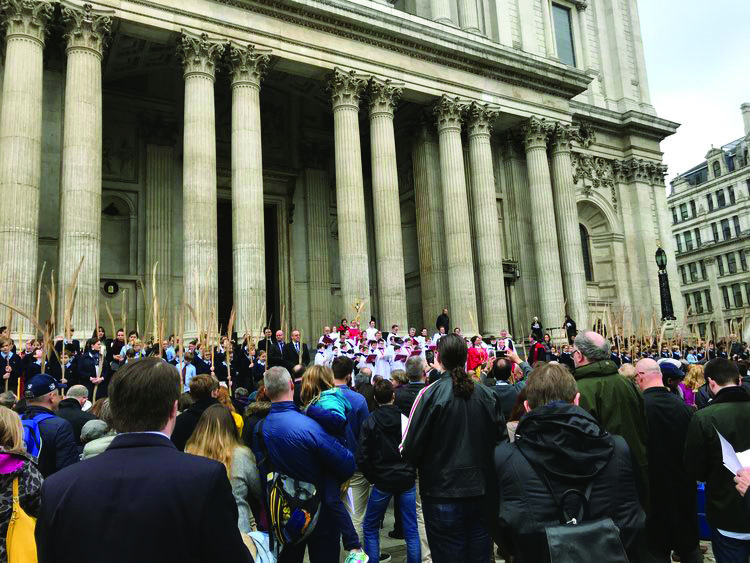 For decades on Easter weekend, Harding’s campus has been filled with families and visitors gathering to participate in Spring Sing and reflect on Jesus’ resurrection, but across the world, students studying abroad at Harding University in England (HUE) immerse themselves in England’s culture and celebrate the day in different ways.

While the Easter eggs, chocolate, religious services and feast-like meals transcend culture on the holiday, the day’s defining characteristics were not the same between the two nations.

According to sophomore Noah Wilder, spring 2018 HUE student, there was more emphasis placed on Palm Sunday in London than in the U.S. Before the service at St. Paul’s cathedral, there was a processional parade that included donkeys, a boys’ choir, trumpets and high-ranking church officials.

“Easter Sunday wasn’t — I don’t want to say not as important — but it was seen as within the mourning period,” Wilder said. “So, they were treating it a lot more seriously.”

According to junior Evan Chesney, fellow spring 2018 HUE student, there was a re-enactment of Jesus’ crucifixion. The re-enactment took place in Trafalgar Square, a well-known and highly-populated area of the city that many of HUE students visit frequently during their time abroad. The actor who portrayed Jesus carried the cross beam on his back through the crowd to two other crosses where the two men playing thieves were put on a pulley system to create a realistic scene of crucifixion.

“I thought that was really cool that they do that and make it so public because I don’t think something like that would fly really anywhere here,” Chesney said. “They did a really good job with the historical accuracy. Just the way they did it was very surreal and very emotional and eye opening, because they didn’t romanticize it at all.”

Chesney also said the HUE group went out to a traditional Sunday roast on Easter and the HUE Director, Lauren Knight, coordinated a chocolate egg exchange, an Easter tradition in the English culture, for their group.

Other non-serious traditions of the English culture hold fewer religious undertones like Easter bonnets which are the most unique to England. According to History.com, the creative pieces originated when middle-class people noticed the upper-class people dressed up in their best clothes for Easter and wanted to participate as well. Thus, the beginning of the crafty, colorful tradition began.

Whether you’re celebrating Easter in Searcy, at home or overseas with International Programs, Easter serves as a cornerstone for those in the Christian faith.