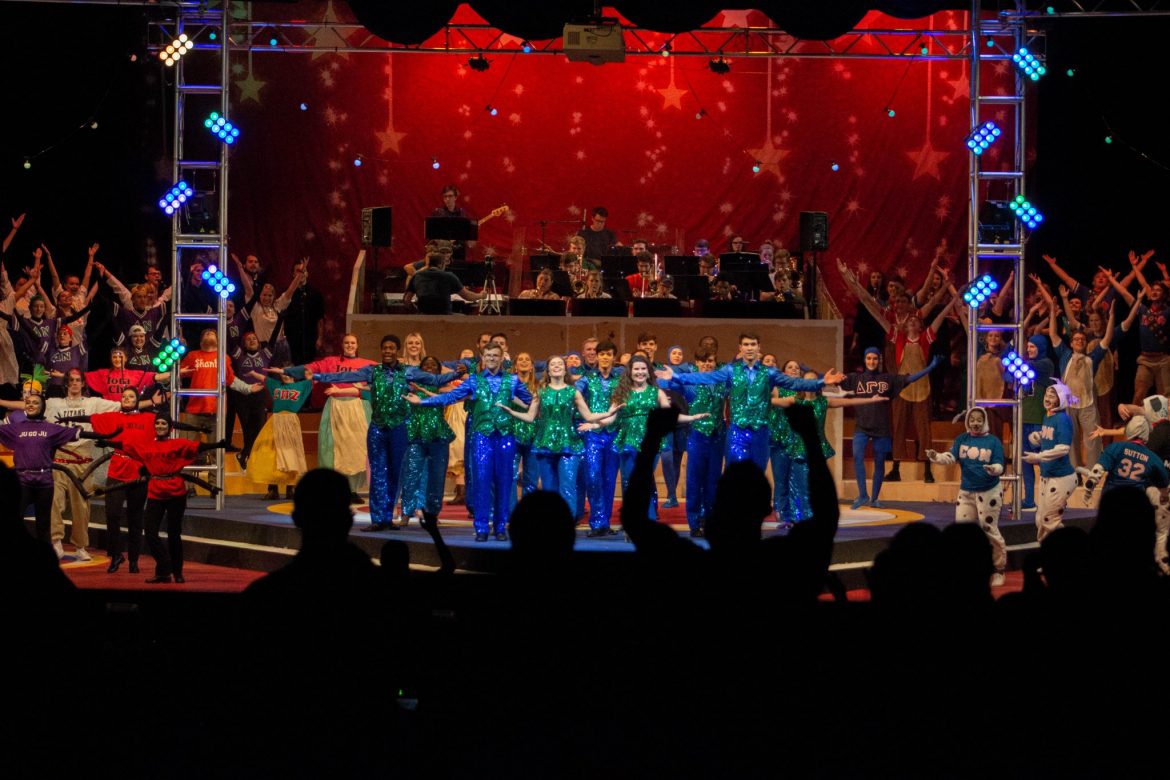 Saturday night’s Spring Sing performance is always one of finality.

As the confetti falls, the jazz band strikes their final chord in the final act of the final show. The final award — the John H. Ryan Sweepstakes — is relished with a final breath of relief and celebration, and cast members take make-up remover wipes to their face for the final time in the Spring Sing season.

Even finals week looms, offering another mark of conclusion, reminding students, and faculty too, that finality comes in all forms when the lights go out in the George S. Benson Auditorium late Saturday night.

For some, however, Saturday night’s finality strikes a more emotional chord.

For those with whom Spring Sing has become a way of life, Saturday night comes as the end — their years and lyrics and sweat and tears and laughter and friendship and community and love culminating in one grand finale. While summer breaks came as intermissions and the fall semester came as the breaths caught between club acts, Saturday night’s performance offers a more definite conclusion.

For some, Saturday night’s performance is the final curtain call.

Senior Justice Laws will make his final Spring Sing curtain call this weekend. Laws, who participated as an ensemble and club show member for four years, found a deep connection to the show, which will only make it harder to leave its stage.

He remembers a solo dance number as an ensemble member during his freshman year. The Monday night, social club show crowd — filled with his peers — was rapturous with applause and awe at the number’s conclusion.

“I didn’t really tell many people that I was a dancer because, in high school, that just wasn’t a big thing where I was from,” Laws said. “It was really cool to have everyone rooting for me and cheering for me because I was really afraid that people were going to make fun of me. It’s nice to have people supporting me and what I love to do.”

Laws said Spring Sing is such an integral part of his Harding experience that his identity has been tied to his presence on the Benson stage for Spring Sing and the Homecoming musical.

For senior Claire Martin, Spring Sing provided her an opportunity, similar to Laws, to extend her love of theatre from high school into her time in college.

As a part of a club show during each of her four years, Martin said she experienced the highs and lows of Spring Sing, becoming  emotionally, physically and spiritually invested in the campus-wide spectacle.

Martin recalls Saturday night performances from years past when she and her closest friends
— made largely in part through Spring Sing — would fill the aisles of the Benson, duffle bags full of makeup and costumes in tow, awaiting the evening’s grand finalities.

This year, however, Martin gets to take the stage as a club show representative in the finale, making her final curtain call on the Benson stage all the more bittersweet.

“I know what goes into those shows and those final moments,” Martin said. “When I was a senior in high school in my last show, we took our final bow, and I was just sobbing because it’s something that I love so much and something you put so much into.”

She said she expects her final Spring Sing moments to be filled with the same bittersweet emotion, and maybe even tears, too.

Steve Frye, director of Spring Sing and chair of the theatre department, has seen hundreds of students come to the stage, fall in love with it and learn to leave it. He said watching students leave the stage is an emotional experience but also one that is greatly rewarding.

“Every year, for me personally, there’s a bittersweetness of leaving because I’ve spent the better part of a year with a group of club directors and hosts, hostesses and ensemble, and we’ve been working together to create this moment in time,” Frye said. “And like all theatre, it is a moment in time, and when you complete it, it is then a memory.”

Those memories are cherished, Frye said, then recalled in the years following Spring Sing when they are needed most.

In a year when hurt abounded, Frye saw recollection of those memories take new life. “There was an outpouring that was beyond the years that he was involved with Spring Sing,” Frye said. “It was people from the past who had been here and just seeing the work saying, ‘What a beautiful spirit and what a great person.’ They joined in with that, and there is something powerful about prayers being lifted up by saints.”

And so, Frye said, leaving the stage is not all for nothing. It means remembering community and celebrating what he called “ties that bind.”