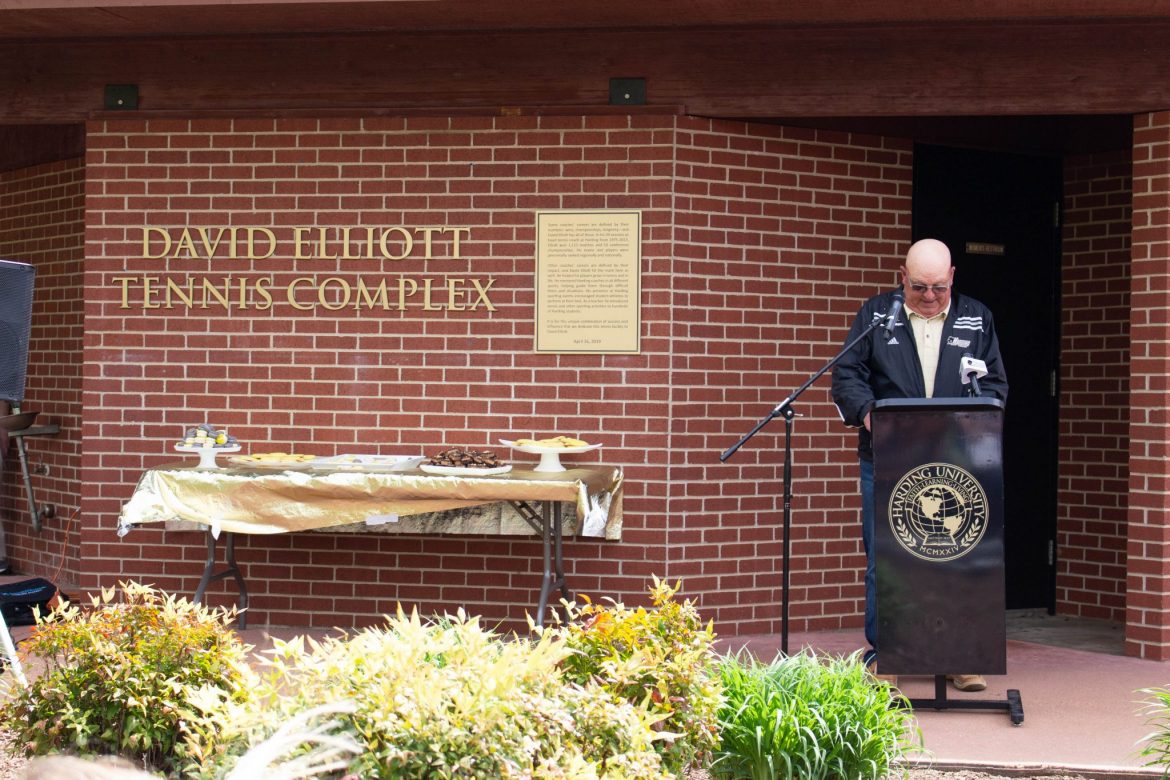 The university announced the name change in a press release on April 10, but Elliot said they tried to keep it a secret from him. He said he only learned of the honor when his cousin called him to send congratulations.

“I had no idea or expectation that would happen,” Elliott said. “But I am thankful.”

Elliott became the head coach in 1975 before Harding offered scholarships to tennis athletes. Still, he wanted to make Harding’s tennis team competitive at the national level.

“We would beg a kid to play and hope he likes it and then grow from there,” Elliott said. In his 39 seasons as head coach, Elliott’s competitive nature spilled over to his players, including current Head Coach David Redding. “Coach E. was and is one of the most competitive men I’ve ever been around,” Redding said. “He always seemed to do or say the right thing to motivate his players for optimal performance.”

Over the course of his career, Elliott’s tennis teams won 10 conference championships. Despite the wins, Elliott said he hopes his legacy is about more than just the game.

“The wins took care of themselves,” Elliott said. “But having good kids was my priority in recruiting and coaching.”

Former Harding Athletic Director Greg Harnden worked closely with Elliott. He said he saw firsthand the effect Elliott had on his players.

“Not only did he help me seven days a week, he spent a lot of time just taking care of our players in terms of counseling and advising and just being a second dad on campus,” Harnden said.

“There are a lot of great memories being here at Harding and having all kinds of kids from all places all over the world,” Elliott said.

Redding admitted a lot of what he learned about coaching came from Elliott. Harnden said he is not surprised to find Elliott’s coaching tree live on.

“There’s never been anybody created like Coach E.,” Harnden said. “He’s just so unique. The influence he had on his athletes was tremendous.”

Elliott still regularly attends Harding matches and keeps close watch of the tennis facility. Redding said it is not uncommon for Elliott to call him and let him know the wind screens are down or the nets have holes in them.

“I try to stay close to how [the tennis teams] are doing and how other [Harding] teams are doing,” Elliott said.

Now, Elliott will be a part of every Bison and Lady Bison tennis match as they play on the courts named in his honor.

“He has truly shown us a unique side of God that we might not have otherwise have seen without knowing his servant, Coach E.,” Harnden said.