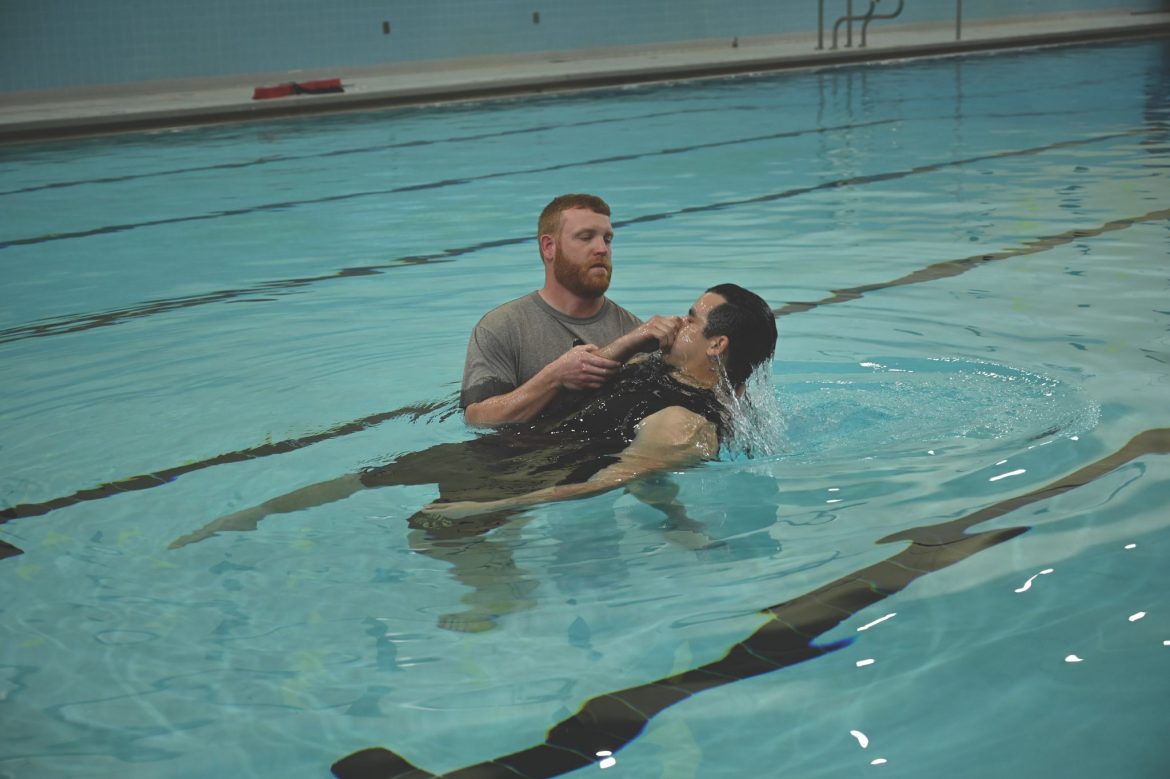 Sophomore offensive lineman Jared Bethea left his home in Florida to come play football for Harding in 2017. Little did he know that his life was going to change forever with that decision.

On March 29, Bethea was baptized into the body of Christ. Bethea was surrounded by his coaches and teammates when he was baptized in the Ganus Activities Complex pool. However, he was not the only one who has made this leap of faith. Since returning from spring break, six members of the Harding football team have been baptized.

It truly is a blessing to join the winning team and devote my life to Christ.– Jared Bethea, Sophomore offensive lineman

Bethea said the sense of brotherhood and family he has felt from the team has affected him tremendously. He said the love and support he receives from his coaches and teammates on a daily basis is what has influenced him the most.

“When playing for Harding, you are not just a number on the field to a coach or a teammate, but a true brother,” Bethea said.

Bethea listed several people who have helped him up to this point but gave the highest of praises to Offensive Line Coach Kevin Chism.

“Coach Chism is truly a man of God I look up to,” Bethea said. “He coaches us with such a passion, and such a strong love for us that it almost seems like we are his own.”

Chism had the opportunity to baptize Bethea and said that was a great day for him and a time of celebration.

“I was very excited when Jared told me what he was wanting to do,” Chism said. “Knowing that his life will be forever changed is a great feeling.”

Chism said the ‘top of the mountain’ for their program is to make Jesus the priority of the team and guide them to live a life for Him.

“It is way more important to us that our young men leave Harding knowing Jesus than it is for us to win games or develop great athletes,” Chism said.

Senior defensive end Jordan Allison attributes the team’s faithfulness to the Lord, and prayers from friends and family to making such a difference in the program. Allison has been influential in many of his teammates decisions to be baptized, meeting and praying with them. Allison gives all the credit to God and the way he is moving through Harding football.

“All I can say is God is good,” Allison said. “The Lord is taking a group of young men and totally changing ideals on what it looks like to be a football player.”