Home Features An Ark and Ants 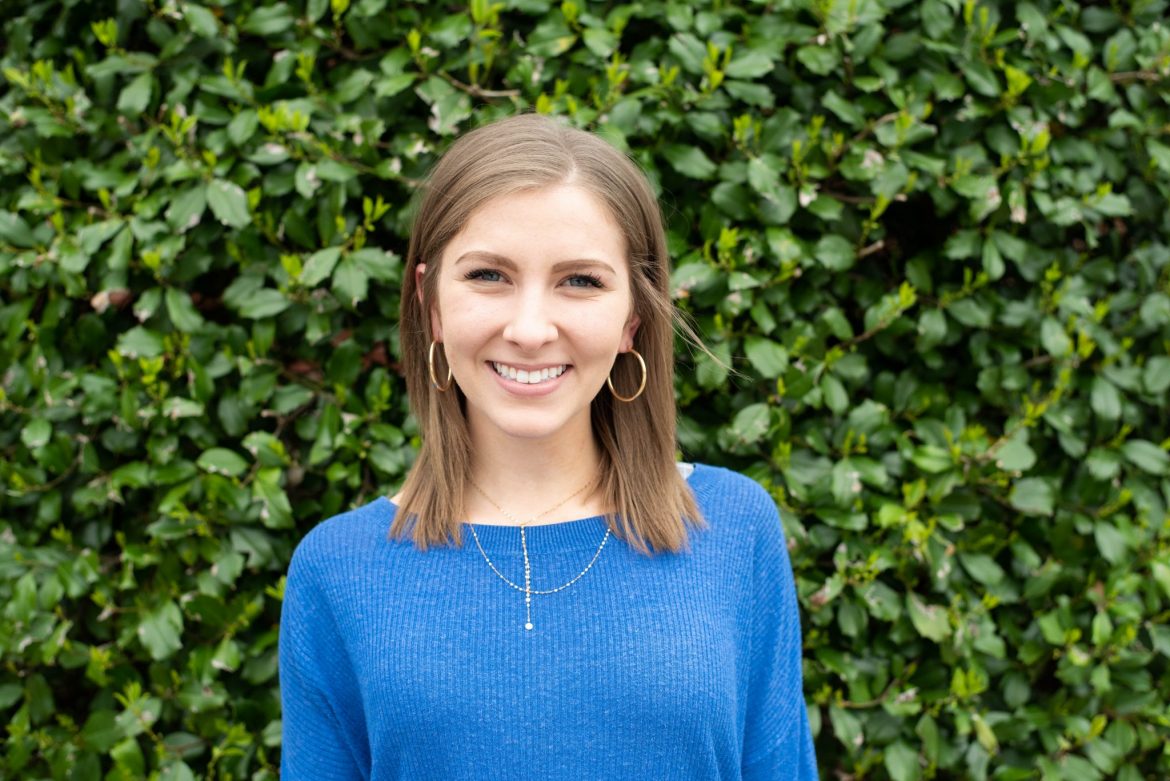 Senior Mckenzie DiLeo returned to Spring Sing this year as a director for the second time. | Photo by Emily Griffin

Mckenzie DiLeo and her ants are marching one-by-one toward a hopeful victory.

DiLeo, a senior and one of the six directors of the womens’ social clubs Ju Go Ju ( JGJ) and Ko Jo Kai (KJK) and men’s social club Sub T-16 ant-themed Spring Sing show, returned to the role of director this year. DiLeo was previously a director for the clubs in 2017, when her Noah’s Ark-themed show, “Rock the Boat,” placed second overall.

“Rock the Boat” won three of the four major judging categories. The show won first for visuals and staging and tied for first in entertainment. The show did not, to DiLeo’s surprise, place in the music category. When the scores were totaled,“RocktheBoat”slippedtosecondplace,losingto women’s social club Delta Gamma Rho and men’s social club Omega Phi’s cow-themed “Chicken Filet.”

“I didn’t even realize there was a problem with the music,”DiLeo reflected.“We knew we were really strong at everything else, and we were really hitting hard at our strengths.”

Despite the outcome, DiLeo said she was still thrilled with the show’s final product, and took 2018 as a break from Spring Sing. She had no intention of directing again until a year later, when senior JGJ member Madison Ceurter approached her about codirecting. DiLeo and Ceurter had worked closely to prepare Ceurter for a solo role in “Rock the Boat,” and Ceurter said she was confident she and DiLeo could work well together as directors.

At first, DiLeo was uninterested. She was preparing for her senior year as a chemistry major and knew her course load would be rigorous. More so, she was proud of her first show; she had given it her all and did not think another show could compare.

“That was the reservation: being able to handle it again with how much work it is, and then just liking [directing a different show] as much,” DiLeo said.

Ceurter and DiLeo continued to discuss the possibility of directing together, and eventually, DiLeo decided she was ready to jump back into Spring Sing. The pair was elected to the director roles by their club, and they immediately got to work with fellow directors sophomores Tori Fry and Lindlee Aspinwall from KJK, as well as sophomores Garrison Hendrix and Matt Ramirez from Sub T-16. Ceurter said she and DiLeo have worked to take the lessons they learned from “Rock the Boat” to make this

year’s show even better. For example, in “Rock the Boat,” DiLeo’s team choreographed a particularly challenging finale. This year, the directors decided to approach the entire show the way DiLeo had previously approached that finale.

As a two-time director, DiLeo said she has worked to ensure this year’s show is as well-rounded as possible. “I definitely think this time, 100 percent, we’ve really been aware of music,” DiLeo said. “We were just so hyped up on our strengths last time that we didn’t realize that. This time, we’ve really made music a priority.”

Junior KJK member Kally Byrd, who is participating in Spring Sing for the third year, said she has seen DiLeo’s past experience directly benefit this year’s show.

“She was already an amazing director, but she learned from her past experience and has made a point to grow in our clubs’ weak areas,” Byrd said.

Byrd, a member of “Rock the Boat,” said DiLeo’s leadership had a major impact on her decision to run for KJK’s director position the following year. With Byrd, the clubs’ alien-themed show,“Houston, We Have a Problem,” won the John H. Ryan Sweepstakes Award.

“I saw how much [DiLeo] loved Spring Sing and how much work she put into it, and I personally thought we should’ve won [in 2017], so I decided to run for Spring Sing director to create a winning show,”Byrd said.“[DiLeo] was a great example of a well-balanced, passionate, hard- working leader, and I really tried to channel those qualities while creating and directing our show.”

DiLeo’s love of Spring Sing has not only influenced Ceurter and Byrd, but also JGJ, KJK and Sub T-16 as a whole. This year, there are 150 participants in the clubs’ show. Seventy of those participants are upperclassmen that wanted to participate in Spring Sing for a second, third or fourth time. According to DiLeo, it’s the largest show in Spring Sing history, and she could not be more thrilled.

“It’s a great way for freshmen to stay involved with upperclassmen,” DiLeo said. “Our clubs know each other really well across all ages because I think Spring Sing keeps everybody together.”

JGJ, KJK and Sub T-16 are striving for a second consecutive win this year, and DiLeo is ready to take home the trophy she believes they narrowly missed in 2017. Byrd and Ceurter said a win for DiLeo and her ants would be more than well-deserved.

“She’s put everything into this show while balancing a difficult major and a social life,” Byrd said. “She is seriously a Spring Sing legend, and I will always look up to her and have so much respect for her.”

Spring Sing and the Scotts