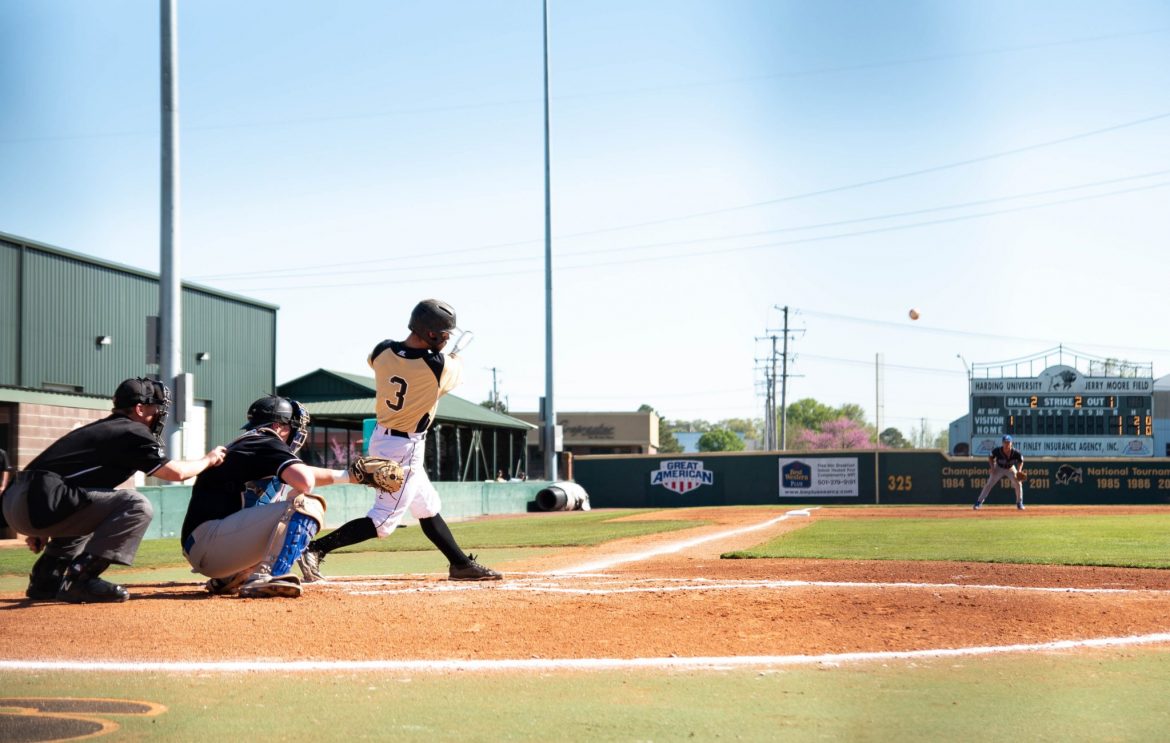 Game One
The Harding baseball team lost the first game in the doubleheader with Williams Baptist College 6-4 on Tuesday, April 9 in a seven-inning game.

Freshman pitcher Kaden Kirby started the game throwing above a 78 mph average, striking out two hitters in the first inning. WBC struggled at the plate but managed to get one man around the diamond on a double, wild pitch and a single, scoring one run in the top of the first inning.

In the bottom of the first inning, senior outfielder Nolan Fertig hit the first pitch and ran all the way to third for a triple. Junior first baseman Miles Humphreys flew out in the next at-bat, scoring Fertig from third and making the score 1-1.
In the top of the second inning, WBC took offensive control and pulled ahead, scoring three runs in the inning. Sophomore Nick Bowers relieved Kirby on the mound with two outs and runners on the corner. Bowers forced a groundout to escape the inning with the score 4-1.

Freshman outfielder Cody Smith was hit by a pitch to lead off the bottom of the second. The Bisons would load the bases with no outs on a walk by senior outfielder Jack Thomas and a single from senior designated hitter Tyler Mohr. Harding would squander the opportunity, scoring only score one run in the inning.

The Bisons stood firm in the field and Bowers pitched a zero-run third inning. Harding would claw back within one in the bottom of the third inning.

After that, WBC would pull away. The Eagles scored two runs in the fourth inning, and Harding was unable to match them. The Bisons did not allow another run for the rest of the game.

Harding once again loaded the bases in the bottom of the fifth. Thomas flied out to centerfield, deep enough to score junior shortstop Connor Kelly and cut the Eagles lead to two.

That is how the game would end. The sixth and seventh innings were an unproductive battle, and neither team managed to score any runs.

“We didn’t execute well,” pitcher Nick Bowers said. “Next game we are going to be more aggressive at the plate and set the tone on the mound.”

The Harding baseball team hosed down the field, pounded the mound, raked the dirt, and painted the home plate to prepare to win the second game of the doubleheader.

Game Two
The Bisons jumped out to an early 4-0 lead in the first inning of game two. They capitalized on WBC miscues to score three unearned runs. The offensive success would continue in the second inning when Harding scored five more runs to push the lead to 9-2.

Despite their impressive run total, Harding only managed one extra base hit, an RBI double in the second inning from Humphreys. The Bisons walked six times and were hit by four WBC pitches. The free passes help jump-start the struggling Bison offense.

On the hill, freshman pitcher Dylan Adcock pitched four innings of three-run ball. WBC would score four runs in the fifth and sixth innings but never challenged Harding closely after the Bisons offensive explosion in the second inning.

Harding won game two 12-8 to take the season series with WBC 3-1. The Bisons play again this weekend in Arkadelphia against Ouachita Baptist University. Harding is currently in fourth place in the GAC, while OBU is in the eighth. The top six teams qualify for the GAC Tournament. First pitch for that series is April 12 at 3 p.m.