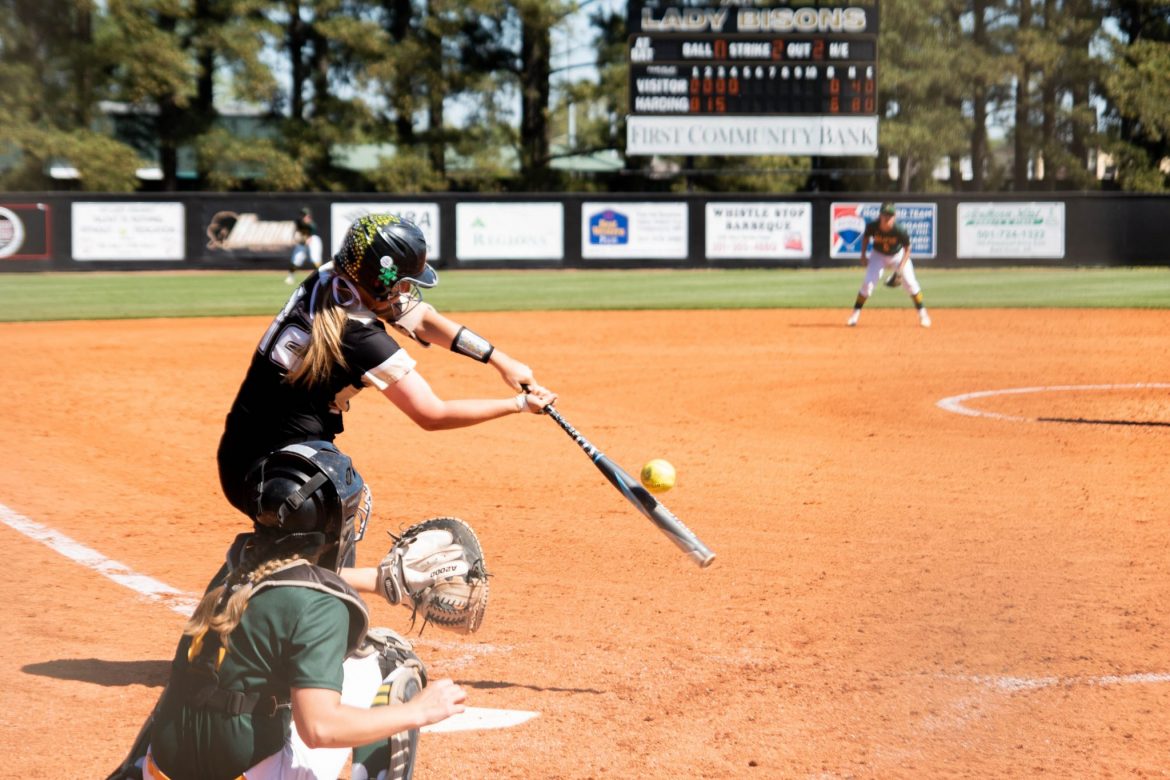 On the hottest day of the year so far, Harding softball ran out of gas in a doubleheader matchup with rival Arkansas Tech University (ATU). The Lady Bisons won game one by a score of 8-5 before dropping game two 6-0 on Tuesday, April 9.

Game One
Harding opened the scoring in the second inning on a bases-loaded walk by sophomore outfielder Mary Lochala to make the score 1-0. The Lady Bisons loaded the bases again in the third inning and drove in five runs on five hits, including a bases-clearing three-run double by sophomore infielder Madison Leggett.

Harding’s explosive third inning was enough to chase ATU starter M. Goodnight from the game. Goodnight entered with an undefeated 10-0 record on the season.

The offensive production gave the Bisons’ freshman starting pitcher Jenna Hipp some breathing room in the circle. She credited Leggett as one of the main reasons the offense did so well.

“I think we hit really well. We got a bunch of good hits. Madison [Leggett] got a really good hit that cleared the bases and defense played really well too, they made some big plays.” Hipp said. “The hitters had really good quality at-bats and the defense just went hard after every play.”

The Lady Bisons early offense was paired with strong defense early on. Hipp did not allow a single run through the first five frames. ATU would rally in the fifth and sixth innings with five runs of their own, but Harding shut the door on the rally with a run in the bottom of the sixth inning.

Hipp was credited with her 12th win of the season, and Goodnight suffered her first loss.

Harding knew this would be a tough test coming into the matchup. ATU swept the Lady Bisons in a doubleheader in Russellville earlier this season.

“We knew they would come back and they fought back pretty hard,” Head Coach Phil Berry said. “They are a great team. We did a great job of minimizing the damage. Arkansas Tech is always a big one, so there’s a little extra [effort] there.”

Berry said the team’s high energy was evident in the first game. During the game, he told encouraged his players to keep up the passion, because he knew ATU had the ability to come back.

“We talked about how we went over to [Arkansas Tech’s] place and it was a real close game last time,” Berry said. “So with them coming to our place and us defending our home turf, our kids were ready to play. It didn’t take a whole lot to get them excited.”

Game Two
It did not take long for the Lady Bisons’ excitement to wane. Harding did not score another run the rest of the day, falling 6-0 in the second game.

The Lady Bisons only managed five hits over seven innings, and none of those hits were for extra bases. As the sun got hotter, the Harding bats cooled, and the excitement drained from the ballpark.

Harding’s struggles were not limited to its offensive production. The Lady Bisons committed five errors, their highest total of the season. Of ATU’s six runs, only one was earned.

Up Next
With the loss in game two, Harding’s record fell to 27-17 (19-13). That record is good enough for third in the Great American Conference (GAC) behind Southern Arkansas University and ATU. The top six teams qualify for the GAC tournament. The Lady Bisons are three-and-a-half games ahead of seventh-placed Southern Nazarene University with three series to go. Each of those series comes against teams in contention for the GAC Tournament. Harding next plays against Ouachita Baptist University, the fourth-placed team in the conference. That series will be played in a pair of doubleheaders April 9-10 in Searcy.