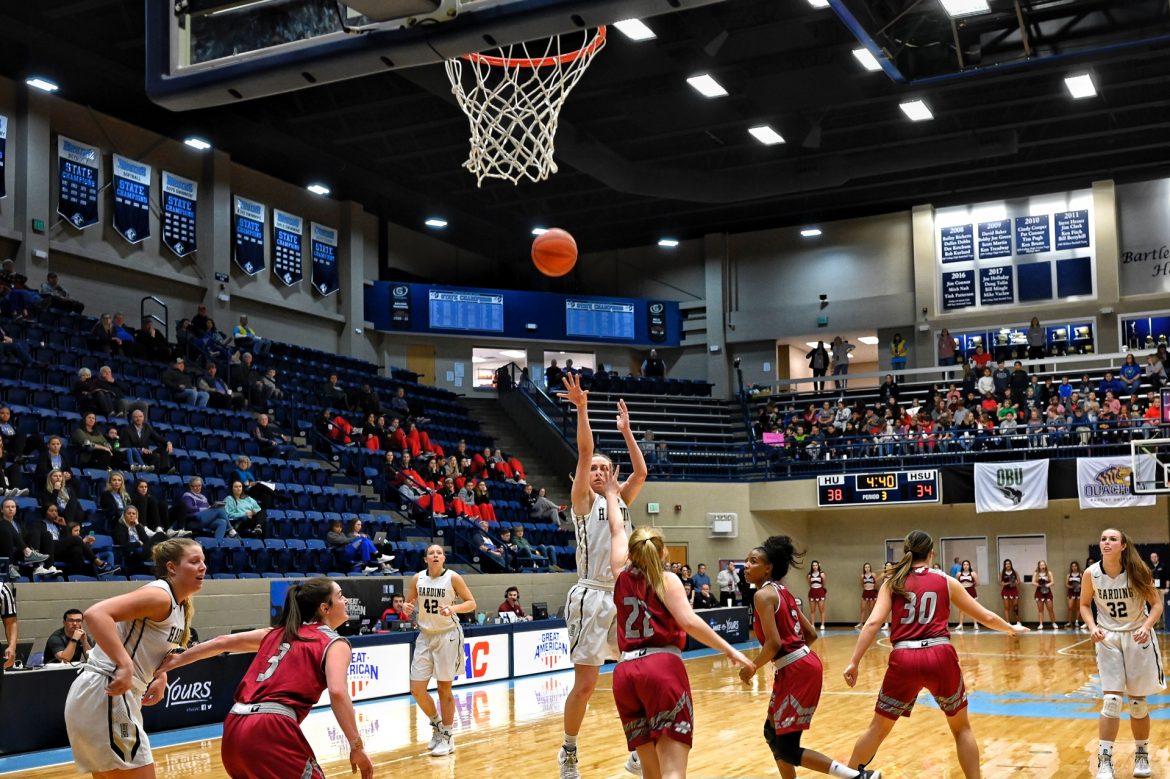 The Lady Bisons outlasted Henderson State University (HSU) today to win their first game in the Great American Conference (GAC) tournament 63-54. In a game of runs, Harding’s largest deficit was nine mid-way through the second quarter.

Women’s Basketball Head Coach Tim Kirby said it was a very physical game at both ends of the court.

“It was a pretty good defensive battle,” Kirby said. “There were not very many easy baskets.”

After a timeout at just under the five-minute mark in the second quarter, the Lady Bisons went on a 14-5 run to tie the game at 28 going into halftime. Sophomore guard Carissa Caples scored 12 of her 22 points during that span.

“[Junior guard] Peyton Padgett did a good job driving and creating space for me to be able to drive and finish,” Caples said.

After the intermission, the Lady Bisons came out strong, jumping out to a 10-point lead and ending the quarter up 50-39 after Caples drained her third three-pointer just before the buzzer.

HSU came back with a 7-0 run in the fourth, but the Lady Bisons put an end to the run with two layups by junior forward Cheyenne Brown. Brown was the team’s second-leading scorer with 14 points, and was a big presence in the paint down the stretch. Harding went back up by as many as 11 and would squash any other attempt at a comeback by HSU.

The Lady Bisons held HSU’s leading scorer, junior guard Pink Jones, to just 8 points; Jones usually averages 15 points per game. In the two previous meetings this season, Jones shot 15 and 17 free throws. Padgett was matched up against Jones for the majority of the game.

Harding’s next game will be against the tournament’s top seed No. 8 Southwest Oklahoma State University tomorrow, March 8 at noon. Caples said the team is excited for the chance to keep tournament play alive.

“We know what they’re expecting of us, and we know what to expect from them,” Caples said. “It should be a good game.”

Full-Court Press | The Lakers dysfunction is nothing new