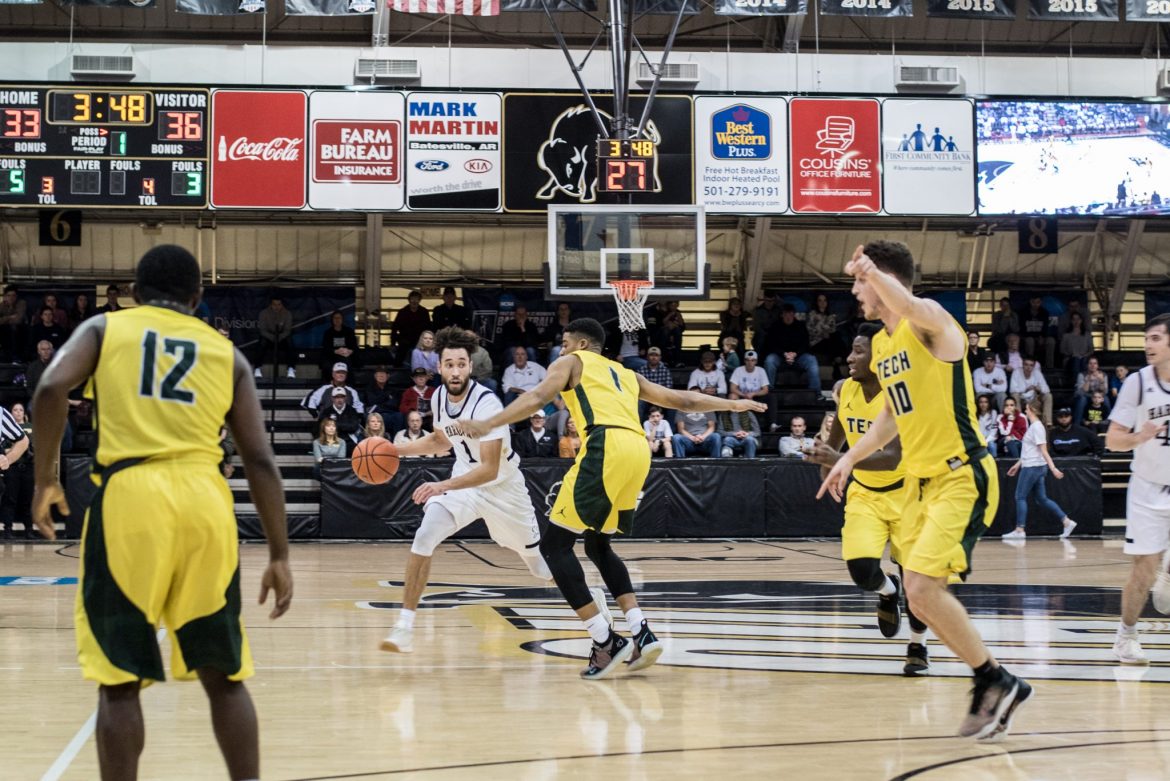 As the final buzzer sounded in the Rhodes- Reaves Field House on Feb. 16, Head Men’s Basketball Coach Jeff Morgan found himself in a position he had never found himself in his 26 years at Harding. The 73-56 loss to Henderson State University marked the Bisons’16th consecutive loss, Harding men’s basketball’s longest losing streak since joining Division II and the longest of Morgan’s career.

The Bisons’ last win came on Dec. 15 against Ouachita Baptist University. In the 16 games since, they have been outscored by 221 points.

Harding’s shooting woes have been at the center of the team’s struggles.This year’s team is scoring the fewest points per game and shooting the worst field-goal percentage, three- point percentage and free throw percentage of any Bison team in the last 10 years. Youth and inexperience played a role in the team’s early shooting struggles, according to Morgan.

“Early on … you could see [the freshmen] trying to rush things,” Morgan said. “They’ve got to go through the process of adjusting to this level.”

to recover from injuries suffered last year. Just as they finally began to return to full health, freshman forward Gabriel Divic and senior guard JV Long both suffered foot injuries in a game against Northwestern Oklahoma State University. Djokovic, Brandon and senior guard Reggie Anthony have also missed time and have been forced to play through injuries during the season.

“We haven’t been able to get everyone 100 percent,” Morgan said. “That makes things really hard in this league.”

With Long and Divic out with injury, teams turned their focus on defense to guarding Martin and junior guard Colin Hale. Martin has not scored in double digits since the injuries.

The Bisons trouble shooting the ball has translated to a drop in assists. This season, Harding only averages 12.2 assists per game, its worst average in the last 10 years. Morgan attributes the drop directly to the team’s inability to finish possessions.

“I’ve never walked out of a game or practice thinking this team is selfish,” Morgan said. “We’re creating shots and making the extra pass. We just aren’t making that shot or finishing at the basket.”

One positive spot for the Bisons has been their effort on the defensive end.They average seven steals per game, their highest since the 2009-2010 season. Morgan attributes the defensive intensity to the athleticism of the team’s recent recruits.

The longest losing streak has been met with mixed reviews by fans. After a 5-22 season a year ago, some are nervous about the program’s future, while others like senior Rhodes Rowdy Jordan Robinson are more optimistic about where the team is at.

“I’ve never once believed that they can’t pull off a stunning victory,” Robinson said. “But I just think a lot of things have to go right at this point to find success.”

Harding’s loss also knocked the Bisons out of contention for the Great American Conference Tournament, leaving them with little left to play for this year. Still, freshman guard Collier Blackburn said the way they finish this year could serve as a springboard for the season to come.

“I think that a big thing that we’ve been doing lately is letting us young guys get in and compete in the games,” Blackurn said. “It’s a great experience so far to get out there and play with these older guys and get all the wisdom from their experience that they have to offer.”

Morgan said heading into next season, the focus in recruiting will be on finding shooters to go along with the athletic slashers on the team. He describes the players his staff is targeting as 40-80 guys: players who shoot 40 percent from behind the arc and 80 percent from the free-throw line.

The Bisons have already made three signings to the 2019 class and Morgan said there are two more scholarship spots free for recruits this year.