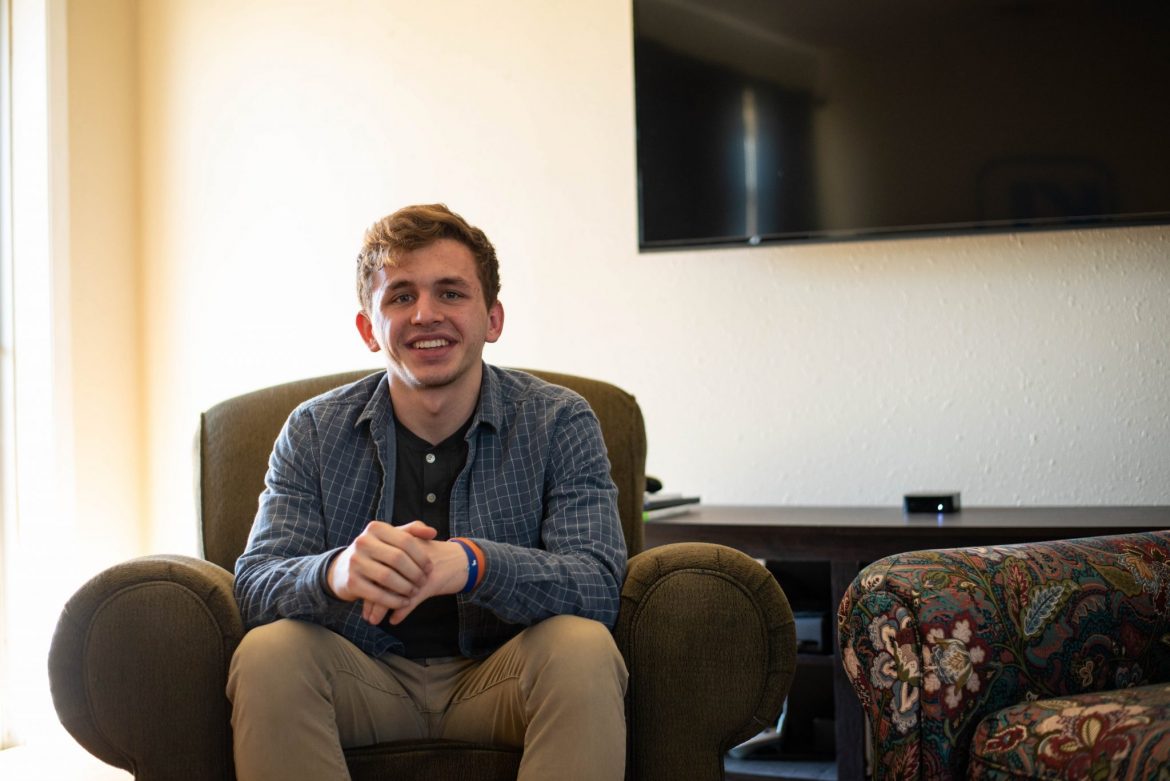 Junior Braden Snyder prepares for his upcoming installment of “15 Minute Story” on Jan. 29. Snyder said he plans to upload a new interview for the series every Sunday. | Photo by Emily Griffin

Everyone has a story to share, whether it’s a fan favorite they tell over and over again or a hidden gem they only share with a select few. Junior Braden Snyder is looking to help people tell those stories with his new YouTube series titled “15 Minute Story.”

The idea for the series came to him during his eight-hour drive back to Searcy at the end of Christmas break. He wanted to find a way for the people around him to share their stories of how they came to know Jesus. From the initial thought, Snyder said he knew the idea came from God.

“I just kind of felt like God put it on my heart and the title came to me pretty easily, but nothing would work until I prayed about it,” Snyder said.

Once he made it back to Searcy, he started working to bring his first video together. First, he found his subject — sophomore Morgan Proffitt. Because the two grew up together, Snyder knew she had an interesting story that she would love to share.

“I just thought it would be cool for people to get to see what Morgan had to say,” Snyder said. “This is pretty much just her story and how she came to know Jesus, what she struggles with now, and how she focuses on the victories of life rather than defeats.”

Within the video, Snyder and Proffitt discuss several impactful moments in Proffitt’s walk of faith. Several minutes in, Proffitt describes a part of her ‘story’ that had long-lasting effects on her.

“I really realized in that moment there’s nothing I can do to earn my salvation,” Proffitt recounted to Snyder in her interview. “It’s been a beautiful turning point of God working in my heart and creating a redemptive and reconciliatory spirit within me.”

Even with the ease of finding the first guest for his show, there was still a lot on the technical side of production that Snyder needed to figure out. He and Proffitt spent several hours on the video, a good deal of which was just learning how to set up the cameras.

“I just didn’t know how to do any of it,” Snyder said. “I was at Midnight Oil editing and I started over three times, just deleted everything.”

After several hours of editing the footage, Snyder had his first video of the series. He uploaded it to YouTube, shared it with a few friends and prayed.

For his second video, Snyder interviewed junior Michael Krupka. Like Proffitt, Krupka shared formative experiences in his faith with Snyder and his audience.

“I had never thought of myself as the type of person who talked about these things online,” Krupka said. “Nonetheless, Braden came to me with this idea, and it was brilliant. YouTube provides the perfect platform for ordinary people to share their stories with the world.”

The first video sits at over 330 views so far, and the second recently passed 200. Both continues to increase in viewership every day. Snyder already has the next few weeks of guests lined up and hopes to upload a new video every Sunday night.

“As long as people want to keep sharing their stories,I’ll keep filming it,”Snyder said.“It’s been really fun so far and I can only imagine it’ll get better from here. I think it’ll only be over when it stops being about Jesus because that’s what the whole thing is about.”