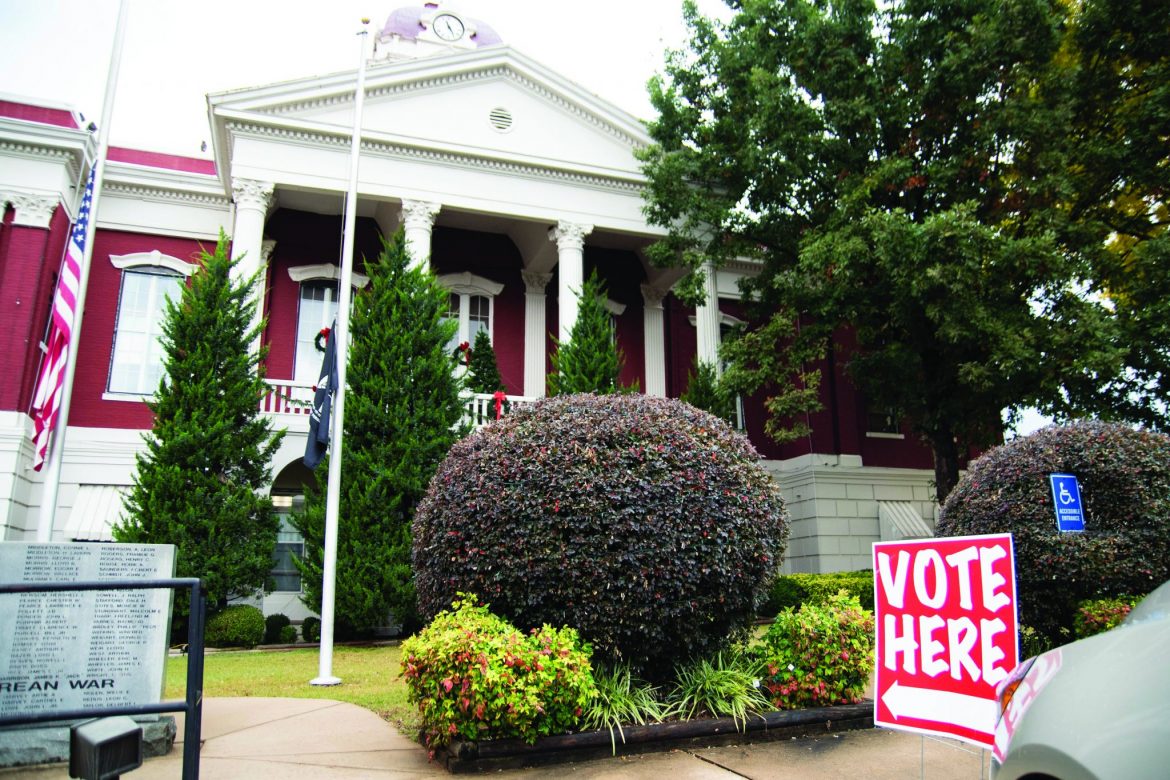 On Oct. 31, the White County Courthouse celebrates the season with a “Vote Here” sign and Christmas decorations. Early voting for the midterm election started on Oct. 22, and polls will close on Nov. 6. | Photo by Emily Griffin

Arkansas residents will vote on three ballot issues during midterm elections on Nov. 6: Issue Two, an amendment that requires citizens to present photo identification to vote; Issue Four, an amendment that grants four casino gaming licenses; and Issue Five, an act that raises the minimum wage.

Issue Two is an amendment to the Arkansas Constitution proposed by the legislative branch. Issue Four is a constitutional amendment brought forward by petition, and Issue Five is a statute also brought to the ballot by petition, according to Lori Klein, assistant professor of political science and public administration.

“What we say in government class is who loves it, who hates it and how much is it going to cost,” Klein said.

Klein said Arkansas laws already require photo identification to vote, and the amendment proposed by Issue Two will put the formal language in the constitution. The act proposed by Issue Five would raise the minimum wage from $8.50 per hour to $9.25 per hour with eventual raises to $10 and then $11, and Klein said a national movement supports the increase in minimum wage.

Originally, the ballot listed five issues. Although Issues One and Three are still on the ballot, the Arkansas Supreme Court deemed them unconstitutional and determined that the votes will not be counted. Issue One was an amendment that would alter some court fees among other related changes, and Issue Three was an amendment meant to limit some elected term limits.

Mike Chalenburg, assistant vice president for information systems and technology, also serves on the Searcy City Council, and he said the mayoral position and three council member seats are up for election in Searcy. He said Issue Two is already a law, and Issue Four likely will not have a large effect since the closest proposed casino license is in West Memphis, but the minimum wage would have a large effect on local people and businesses.

Chalenburg said students from outside of Searcy can vote in some local races if they register.

“The makeup of the city council probably doesn’t have a lot to do with your average student,” Chalenburg said. “It’s really more how engaged you are and what it might change.”

Senior Kaycie Alexander, president of Harding’s chapter of the political science honor society, Pi Sigma Alpha, is from Texas, and she plans to vote in the Texan midterm election by absentee ballot this year.

“Honestly, I just think it’s important to vote in general,” Alexander said. “In these college years, I feel like a lot of opinions should be really starting to gather in our own brains, and we’re kind of developing those for ourselves. … I think that a lot of students are now looking more at specific issues individually rather than party lines, and I really commend that, and I would really hope that that continues.”

For more information, Klein recommends reviewing a sample ballot at the Arkansas Secretary of State website or utilizing the Cooperative Extension Service provided by the University of Arkansas Division of Agriculture Research and Extension, which provides information about each ballot issue.