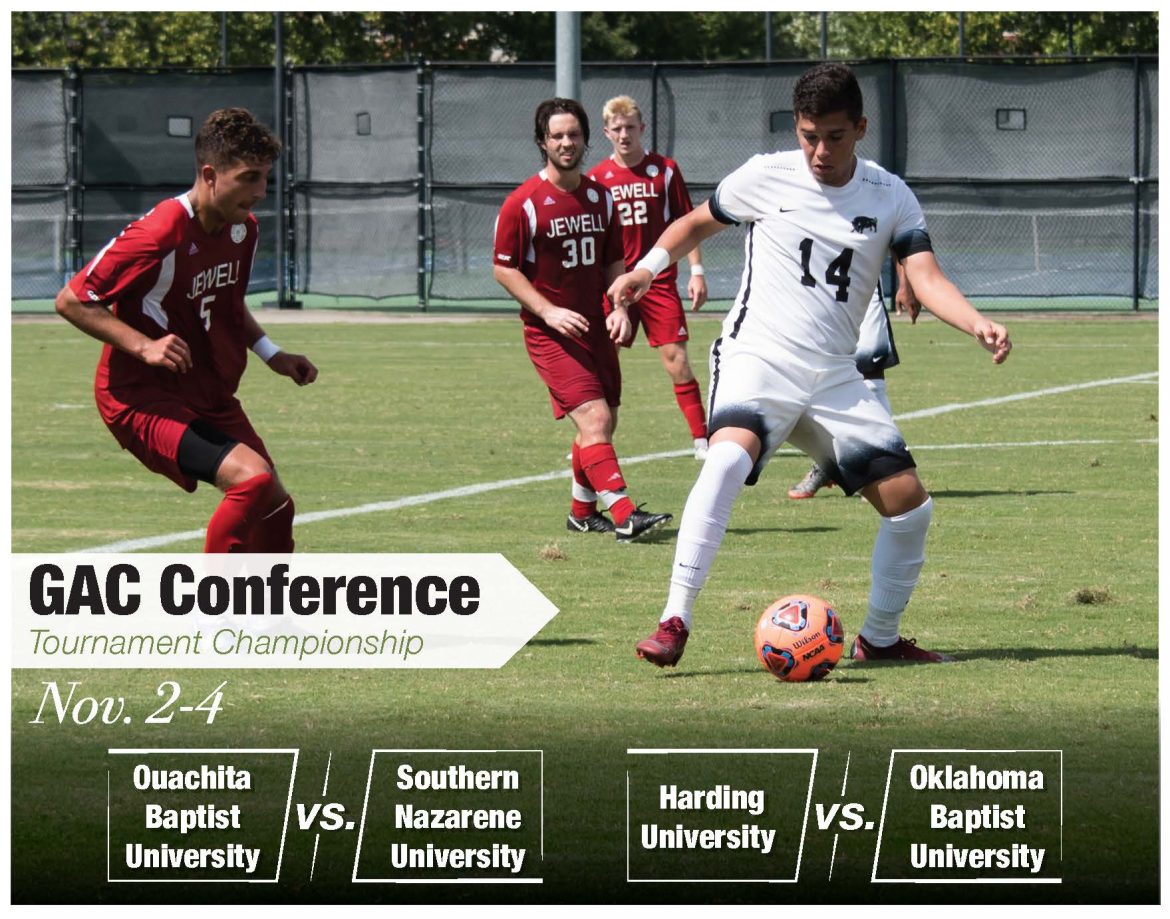 The Harding University men’s soccer team will host the annual Great American Conference (GAC) Championship Tournament this weekend. The Bisons enter the tournament as the No. 1 seed after defeating Ouachita Baptist University on Oct. 23.

Harding’s first opponent of the tournament will be the four seed, Oklahoma Baptist University (OKBU), at 7 p.m. Harding beat OKBU twice during the regular season by a combined five goals. Should Harding win tonight, they will play the winner of the game between OBU and Southern Nazarene University (SNU) on Sunday for the GAC Tournament championship.

The Bisons finished the regular season with a record of 9-5-1. The team’s 4-2 conference record was good enough for the team to achieve one of its main goals this season.

“Our goal without a doubt this year was to host [the GAC Tournament] again,” Harding Head Men’s Soccer Coach Jon Ireland said. “We did that, and so now we want to be able to be the first team to win the regular season and also the conference tournament.”

This year, the regular season GAC champion and tournament host was not determined until the final game of the season between Harding and OBU. Junior defender Christian Ramos broke a 0-0 deadlock in the 54th minute, which wound up being the game-winner.

“As soon as I saw the ball go into the back of the net, it was all kind of excitement,” Ramos said. “We knew what was going on with the game … that if we won we would get to host.”

Ireland said leading up to the game there were a lot of nerves. Harding needed the win to host this weekend’s tournament. The Bisons have been successful this season at home, going 6-1 compared to the team’s 3-4 record on the road.

The Bisons have used the last week to recover from the busy conference schedule, according to Ireland. Now, Ireland said he has to work to keep the team’s energy as it moves into the tournament.

“The difference now is that if you lose, your season is over,” Ireland said. “So, there’s a finality to it.”

He said he is not concerned about his team’s motivation coming into this weekend. For players like Ramos, who were part of the team which was the tournament champion two years ago, the opportunity to win again has them excited.

“It’s something special,” Ramos said. “To be able to do that with this group of guys would just be even better, because we’re so close.”

Tournament play will begin at 4 p.m. today with the game between OBU and SNU. In the event of rain or wet field conditions, the tournament will be moved to Beebe High School’s turf football field.