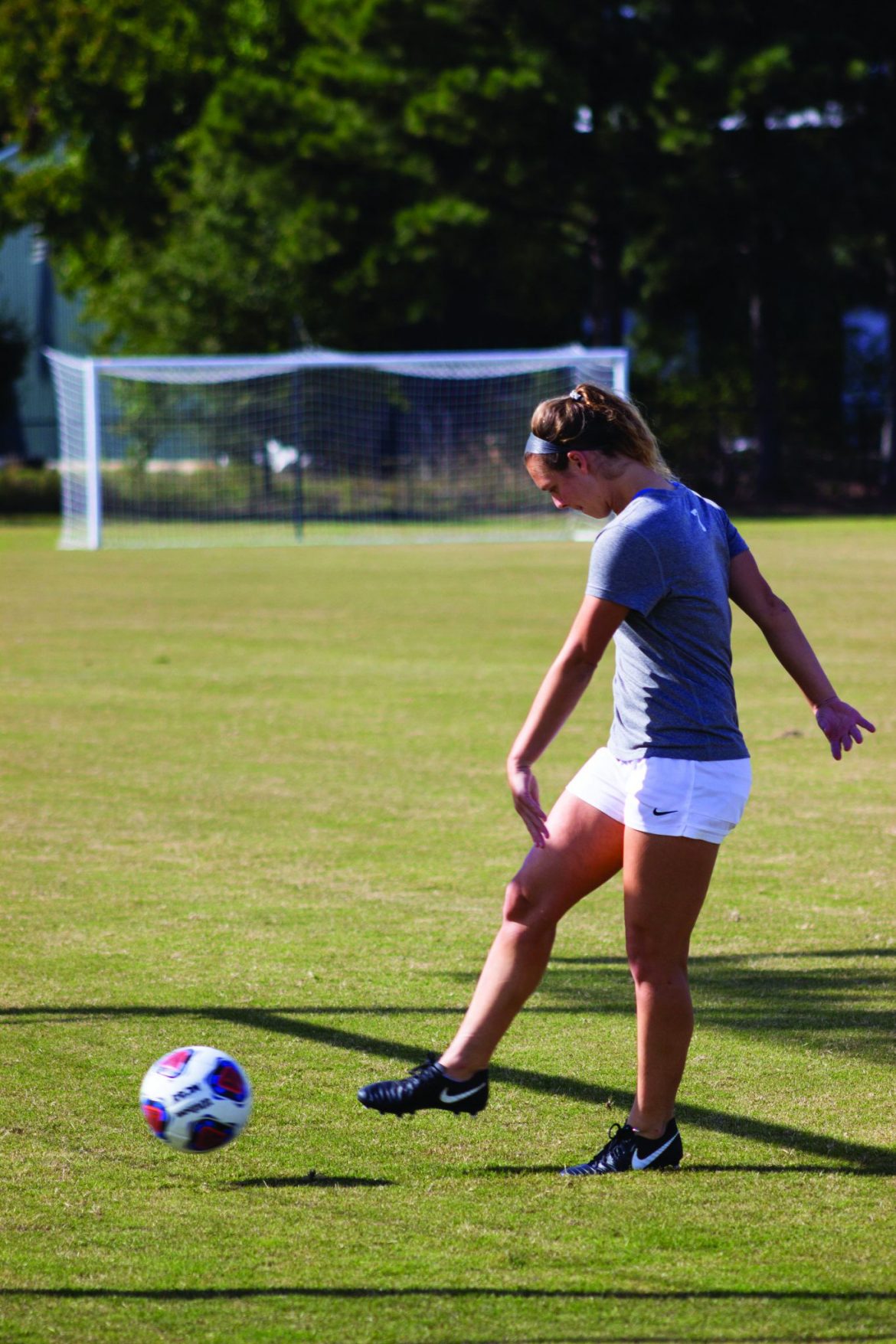 Senior Harding women’s soccer midfielder Bethany Sutherland leads the Bisons in every major offensive statistical category: goals, assists, points and shots. Sutherland has been a statistical leader for the Lady Bisons since she stepped on campus as a freshman, but off the field she has developed into a leader for her younger teammates.

Sutherland first came to campus the summer before her junior year of high school to attend a soccer camp. Head Women’s Soccer Coach Greg Harris said he noticed Sutherland right away as a future leader.

“We knew then she was going to be a really good player,” Harris said.

When Sutherland joined the Bisons, she became part of a program filled with junior and senior playmakers. Still, Sutherland managed to get significant play time as a freshman. She led the team in goals that season, scoring 23 goals, a Harding single-season record.

“When Bethany was a freshman, she was able to just kind of do her and be herself,” Harris said. “She was surrounded by a lot of good juniors and seniors.”

One of those juniors was her sister, Melita Sutherland. The two instantly connected on the field.

Bethany said her favorite moments in her college career were the times when she scored off an assist from her sister.

When Melita graduated, Bethany was forced to step into the role of leader. The girl who Harris described as quiet had to fill her sister’s role.

“I feel like I show more by example,” Bethany said. “That’s my way of leading, rather than saying anything.”

Harris, though, said he has seen Bethany push his team and become like another assistant coach.

“She’s becoming a teacher on the field, especially a lot during practice,” Harris said. “She is really helping the young ones, guiding them.”

As she has gotten older, Bethany said teams have started doing more creative things to stop her from being a factor. Some have double-teamed and even triple-teamed her. As a result, she has only tallied nine goals this season.

“I want to score and step up and help be the example,” Bethany said. “I am just not where I want to be.”

That desire to be better is not lost on her coach.

“She’s not someone who just gets out of bed and is naturally good every day,” Harris said. “Everybody just sees the games, goals … and that’s all good. But she’s also helping others get better, which is what this whole journey is about.”

In spite of her struggles, Harris is still grateful to have a player like Bethany leading his team.

“When you have someone like Bethany , you always have a chance,” Harris said.

Bethany’s Harding career will be remembered in the record books. She is the school record-holder in career goals, points, shots, shots on goal and penalties. But, it is the things off the field that her coach will remember.

“I have spent a lot of time with Bethany and I actually personally enjoy more Bethany the person [than the player],” Harris said.