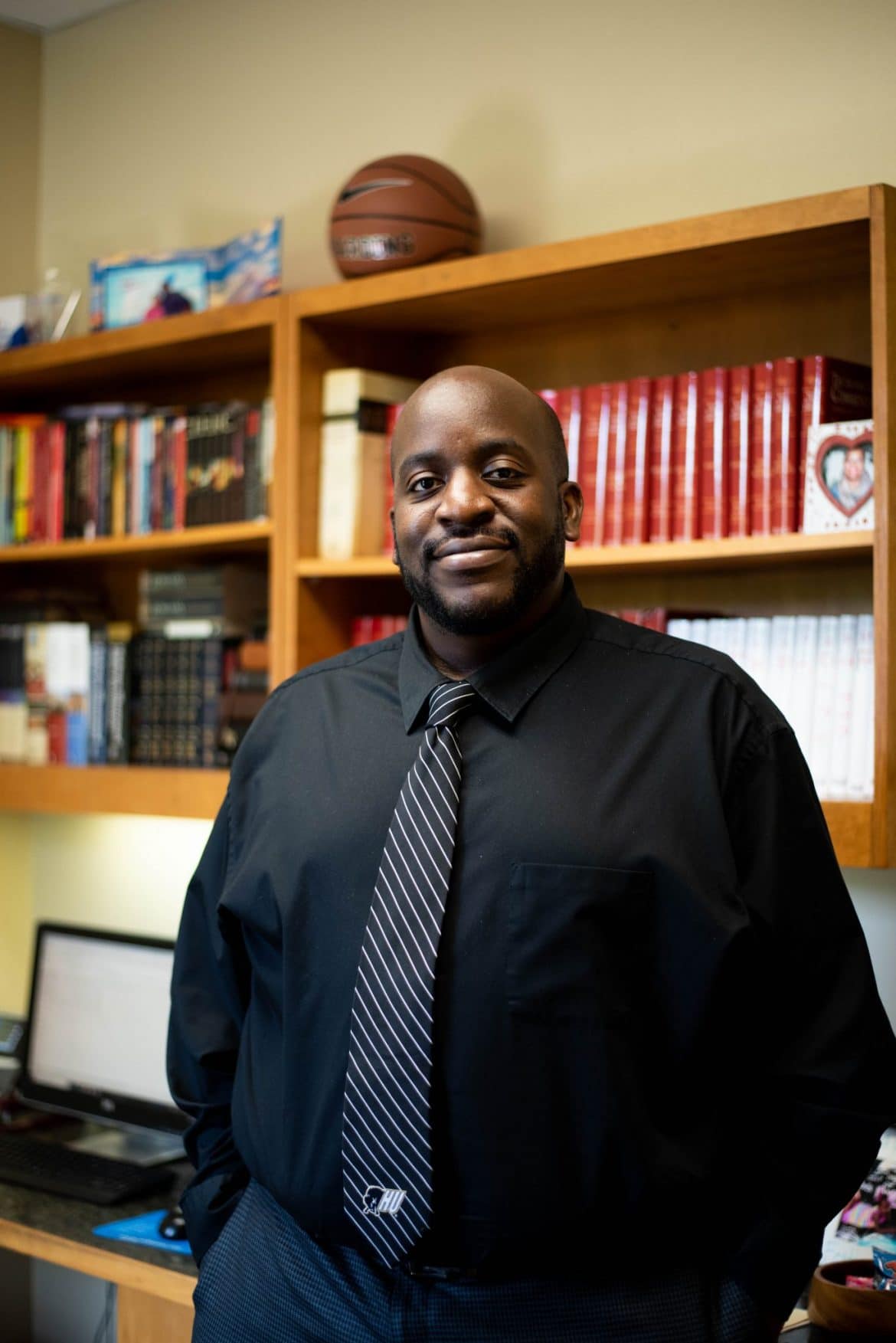 The newest addition in the Office of Student Life comes as no stranger to Harding University and brings with him a deep-rooted passion for students and a hopeful heart for the future.

Marcus Thomas took the place of Brandon Tittle as assistant dean of students on July 1. While he spent his first month and a half in the Student Life office learning the ropes before students returned, their arrival on campus reminded Thomas why Harding was a place he wished to return to since his departure four years ago.

“I’m so excited to be back at Harding,” Thomas said. “There’s just something about being here, being around the students. They are so hopeful, and they want to change the world.”

Thomas is one of five sons raised in Kansas City, Missouri — his love for the Chiefs, Royals and “real BBQ” exemplify a rich connection to the city that shaped him. Kansas City, however, was not simply sports and world-class pulled pork.
In his early teen years, Thomas and his brothers had signed a record label with Arista Records. But at 15, his father, a minister in the Kansas City area, committed murder. A prison-bound father left the family and a hopeful 15-year-old in upheaval.

“It was very challenging for me to see my family struggle because of the choices he made,” Marcus said. “There for a while, we thought we were going to be homeless. Thankfully, a family from church took us in.”

A few years after the abrupt change of course, Harding became a life raft.

“I came here questioning so much of my faith and God because of where I was in my life,” Thomas said. “Had I not been at Harding, I know I would not have been successful. Thank God for this place, the people I met here and the kind of environment that had structure and rules — everything I hated as a student.”

His love for Harding moved beyond undergrad. After graduating in fall 2002, he took a semester off then returned to complete graduate-level work in education. Master’s degree under his belt by 2006, he took a job in admissions until 2014 when he left be a family life minister in Paducah, Kentucky.

When the opportunity arose to return, he was sure not to miss it. His goal as the newest assistant dean: “simply help somebody — just one person.”

“In this position, help looks a lot of different ways, but it’s all help,” Thomas said. “I just want to be right — righteous — in God’s eyes, do the right thing and help somebody along the way. Everything else is secondary in my mind in honoring God.”

Thomas is quick to extinguish the idea that the deans are out to get students but maintains that students are ultimately the ones responsible for their decisions.

“The last thing on my mind is being out to get somebody. The first thing on my mind is wanting to help people succeed,” Thomas said. “It’s my hope that this position looks like one of grace and mercy, even if it may not look like that on the front end. I want everybody to be successful and stay here. That’s my job.”

Thomas also has high hopes for making this place he loves a stronger, more perceptive institution while remaining faithful to core beliefs and identity.

“In the long run, as perception people that God called us to be — people that are lights of the world — we have to be flexible to certain things so that we can always point people to Christ,” Thomas said. “As culture and society change, the Word never changes, but our method should be flexible.”

Thomas said society and Christians must learn to set aside misplaced motives to move forward.

“A lot of times, we can see things like our patriotism equal to our call to be Christians. They’re not equal,” Thomas said. “I’m glad God blessed me to be [in the U.S.], but I’m here to serve the King and not the things they say we’re supposed to when we love our country. Some of biggest issues stem from our politicalness — not necessarily our politics — and how we can elevate those things over our duty as Christians. I have a big problem with that.”

The opportunity for his daughters — a freshman and fourth grader at Searcy High School — to go to school here is one Thomas said he is beyond thankful for. Being with family tops his list of out-of-the-office hobbies, followed by watching Harding sports, fishing and bowling.

Thomas is not the only one on campus glad for his return. Zach Neal, dean of students, said Thomas’ experience in admissions and as a family life minister make him the perfect fit for the role.

“[Marcus’] background is coupled with an incredible personality and willingness to serve others,” Neal said. “He will provide exceptional support to the students and be a great team player in collaborating with other offices on campus. We are thankful to bring his skill set back to Harding.”

Where do a passion for students and a love for a university coincide? That is where you will find Marcus Thomas, the new assistant dean of students.