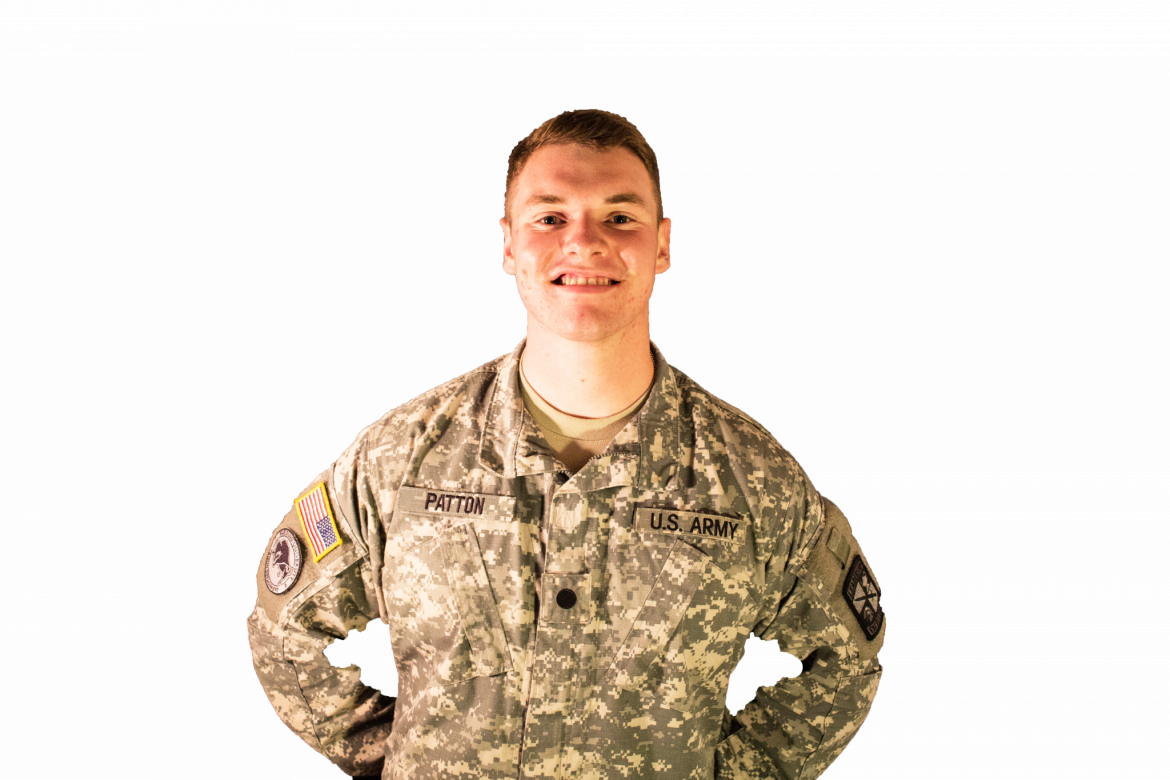 Both Patton’s father and grandfather served in the U.S. military. Patton’s grandfather was an officer of the then United States Army Air Corps in World War II, as well as a pilot in both the Korean and Vietnam wars.  In total he had over 25,000 flights in his career. He retired in 1971 as a lieutenant colonel.

Patton’s father also served as an Army aviation officer. Following 9/11, Patton’s father received training on specialized helicopters but was never deployed. He has now retired and uses his flight skills to pilot the Vanderbilt Life-flight.

Patton is contracted to serve as an officer in the Army for eight years following college and intends either to follow in the footsteps of his father and grandfather and enter the Aviation branch of the Army or pursue a career in Military Intelligence.

Patton believes Veterans Day is an opportunity to reflect on the sacrifices his father and grandfather made to give him the life he has now.

“My grandfather and my dad both set aside many of their own personal matters to selflessly serve the United States of America, and for that I am grateful,” Patton said. “As I prepare to serve in our nation’s Army, I constantly look to my family lineage for inspiration… Motivated by those in my family who have gone before me, I hope to serve, no matter what my career path may be.”

Patton is one of the 24 students in the ROTC included among the various student veterans on campus, according to assistant professor of history and faculty liaison for ROTC Shawn Fisher.

“(Our student veterans) are from every branch of the armed forces,” Fisher said. “Some are in the Reserve or National Guard, others serve on active duty. Some of our student veterans have served in Iraq and Afghanistan, and others have just completed their preliminary training.”

To demonstrate the effect of veterans on the student body, Fisher also spoke of the number of family members of veterans currently enrolled.

“We have a far greater number of military dependents on campus than we do veterans,” Fisher said. “These are the children or spouses of a service member, many of which are using the educational benefits granted to them from a veteran.”

To celebrate these student veterans and the veterans of the community, the American Studies Institute (ASI) hosted a Veterans Breakfast today in Cone Chapel at 7:30 a.m.. This is the third annual breakfast, and according to Excutive Director of ASI Kim Kirkman, last year there were approximately 120 veterans and guests in attendance.

The intent of the breakfast was to thank local veterans as well as give students an opportunity to meet some of the men and women who fought for their freedom, Kirkman said.

“It is amazing to meet so many of the veterans that live in Searcy and White County,” Kirkman said.” I enjoy hearing their stories of their experiences. I get a personal connection to our American history that cannot be read from a book. It is nice to have time to honor these men and women who have served our country so well.”

Fisher urges students to ask veterans questions. He said older veterans are especially eager to talk about their stories and have many lessons they want to pass down to younger generations.

“Listening and spending time with someone is a great way to show appreciation and to show love,” Fisher said. “If all you have time for is to say, ‘Thank you for your service,’ fair enough. But if your grandfather, father, brother, uncle or even just a fellow church-goer is a veteran, ask them about their service and then listen.”

To freshman ROTC cadet Fraizer Thompson, the annual breakfast is an opportunity to commune with those who have served.

Patton said the breakfast reminds students of the importance of Veterans Day and encourages them to reach out to men and women in the service.

“It is my hope that others will learn to respect and honor Veterans Day because it reflects the selflessness that many show through serving in our nation’s Armed Forces,” Patton said.

Thompson agreed, urging that students remember it doesn’t have to be a holiday to encourage veterans.

“(Veterans Day) reminds us that we have the responsibility to give back to them not only one day in a year, but all the days in a year,” Thompson said.