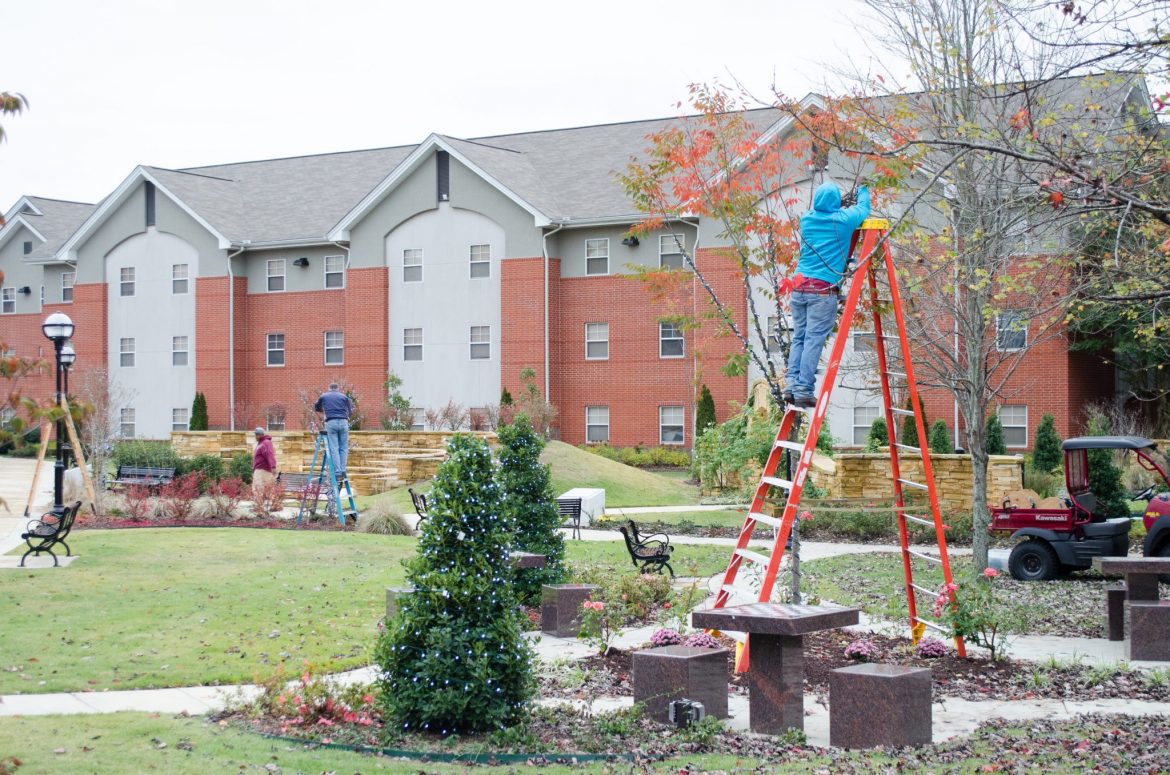 Twelve years ago, then president Dr. David Burks and Vice President of Alumni and Parental Relations Liz Howell met with Director of Physical Resources Danny DeRamus to begin a new tradition of decorating the campus for the holidays. This tradition that, according to DeRamus, started with 60 thousand lights has now grown to include 800 wreaths and 1 million lights.

“Over the years, the lights have become a destination,” said Dana McMillion, maintenance director for physical resources. “It’s now so big that kids tell their parents about (the lighting ceremony), and they come here just to watch. We bring in a lot of people besides the students.”

While DeRamus was heavily involved with the process for the first few years, he said he has since passed the project on to McMillion who has run it every year since.

“It’s special for us because of the happiness and joy that it brings, not only to our students but to our community and to guests,” Howell said.

Howell also serves as chairman of the Holiday of Lights committee for Searcy, an organization that partners with the community of Searcy to create a festive experience for people who visit the city.

“Searcy and Harding are a partnership,” Howell said. “We share the same vision of making our community a better place and, by working together and sharing resources, the ability to make things happen.”

According to Howell, the department of tourism for Arkansas produces a guide of places for people to visit during the Christmas season, and Searcy is included in the list.

McMillion said it takes a group of about eight to 10 people to put up the Christmas lights, with one team in the trees and one on the ground. The team focusing on the trees uses two 60-foot man lifts to reach the branches, and the other team wraps everything they can reach without the lift.

“We’ve added the secret garden in last year so that was quite a bit more,” DeRamus said. “We’ll be trying to incorporate even more so it will get bigger and bigger … we have dreams, it’s just trying to make them happen in the time frame we have with the amount of workers.”

DeRamus said the lighting ceremony brings a sense of the holiday spirit to campus, but there is a different kind of anticipation felt by the six people stationed around the campus who flip the switches to turn the lights on.

“We’re nervous, hoping nothing goes wrong and hoping that everything lights when it’s supposed to,” DeRamus said. “Everybody is just listening to their radio, hoping they can hear it.”

Howell said they will begin the process of taking down the lights after Jan. 8, but will leave the lights closest to the Cone Chapel up for scheduled wedding ceremonies.

“It’s a recruiting tool, too,” DeRamus said. “One year they had football team interviews and they wanted to show them the lights … We really try to get as much use out of it as we can.”

Volunteers who would like to help work on the wreaths will be invited to help on Nov. 10 starting at 9 a.m. at the back of the Ulrey Performing Arts Center. The lighting ceremony will be held Monday, Nov. 27.