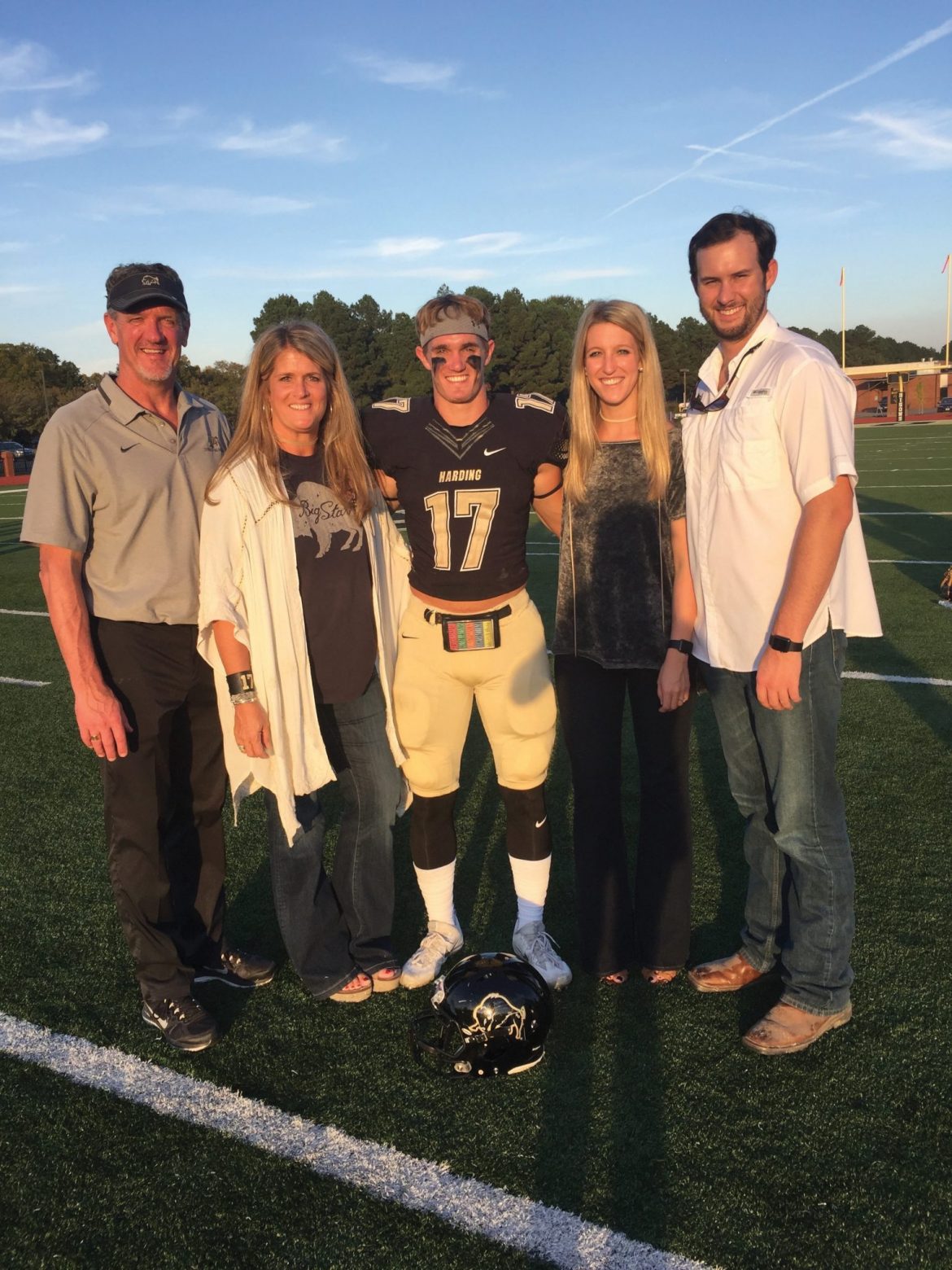 “A lot of people dream of going to other bigger schools away from home, but this is just where I’ve always wanted to go to school. I just wanted to follow the tradition and legacy that my family has here,” senior wide receiver Kohl Blickenstaff said.

Kohl Blickenstaff has been a part of the Harding football program since his freshman year in 2014, but his family has a Harding legacy that spans three generations. His grandfather, Dr. Jim Citty, captained the 1959 and 1960 Bisons football teams and was a member of Harding’s first conference team. Citty moved his family to Searcy from DeQueen, Arkansas, to serve as the Bisons football team’s family practice physician, a position he has held since 1975.

“He dearly loves Harding, and so how I was raised, I never considered going anywhere other than Harding,”said Kellee Blickenstaff, daughter of Citty and mother of Kohl Blickenstaff.

While her brothers played football for the university, Kellee Blickenstaff cheered on the Harding squad from 1982-86 and ran on Harding’s first women’s track team from 1985-86. She has serveed as the cheer sponsor for the squad since 1998. It was during her time at Harding that she met her husband, Dr. Kyle Blickenstaff, former Harding quarterback and current orthopedic surgeon and sports medicine specialist for the Bisons.

Kyle Blickenstaff was born and raised in Boise, Idaho. Throughout high school, he knew he wanted to play college football, and after visiting Harding his senior year, decided that Harding was the place for him. He credited the quality of his Harding experience not only to his involvement in athletics, but to the quality of his relationships with friends, his wife and his extended family.

As Harding alumni, the Blickenstaffs have remained avid supporters of Harding’s mission and athletics. Kellee and Kyle Blickenstaff raised their two children, Karli (Blickenstaff) Bradley and Kohl Blickenstaff in Searcy, where they both attended Harding Academy, and later went on to attend the university, where they participated in cheer and football, respectively. Karli (Blickenstaff) Bradley graduated from the Harding physician’s assistantprogram in December 2016, and said that her parents’ support of Harding athletics during her childhood was one of the biggest influences which encouraged her to follow in their footsteps.

“I just liked being involved with the team and I loved being at football games and basketball games,” Karli (Blickenstaff) Bradley said. “I just really liked being able to be at the school and support the athletics, because I had grown up just watching it all, and I really wanted to be a part myself.”

While the Blickenstaffs have maintained their involvement in sports over the years, they have ensured that Christian faith be at the center of their lives. That was a concept which they modeled for their children.

“If we were traveling with soccer, we always went in our shin guards and cleats and jeans and rain boots, and we found a church and went wherever we were,” Kellee Blickenstaff said.

As Kohl Blickenstaff and Karli Blickenstaff Bradley consider their futures as alumni and future alumni, they each echoed a similar desire to continue the legacy established by their family.

“This school’s meant a lot to me and my family as a whole,” Kohl Blickenstaff said. “Hopefully my kids will want to come here and get to play ball.”

Karli (Blickenstaff) Bradley said she looks forward to watching her children appreciate Harding in cheer uniforms, basketball jerseys and football jerseys, whether or not they attend Harding, although she hopes that they will.

“It’s just something special, and my parents have just embraced and loved it. I hope that I can give back the like my parents have,” Karli (Blickenstaff) Bradley said. “I hope my kids will want to go there in the future because I had such an awesome time there.”