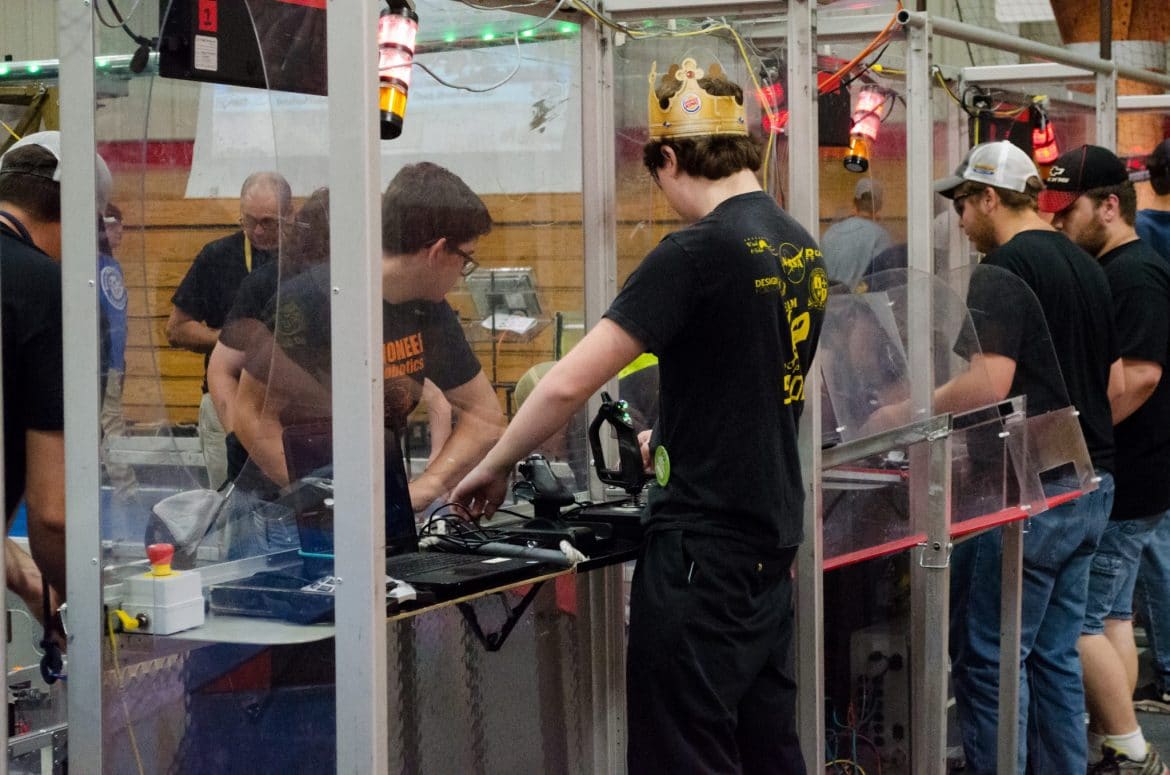 Harding Academy hosted the annual Ozark Mountain Brawl robotics competition in the gym Sept. 19-20. High school teams competed head-to-head with robots they have built and programmed to complete a task, such as moving balls into a designated bin. Photo by Emily Griffin

Breakaway 3937, the Harding Academy robotics team, was formed in 2011 under the leadership of coach Brian Jones. Students in ninth through 12th grades have the opportunity to learn how to build robots and combine laws of engineering, physics and mathematics. The program also involves components of public relations, which teaches students to strategize, speak publicly and fundraise.

“The students have to learn how to run a small business,” Jones said. “On the robotics side, they put in so many hours. They learn how to put away the gaming systems. They learn college skills that will make them better when they’re on their own.”

Along with Jones, several Harding students mentor the robotics team, some who are former members themselves. Senior Zach Bissell, a former member, mentors students on the team and is often involved with competitions.

“My friends and I want to help students where we can. We had such a great experience,” Bissell said. “It gives students so many opportunities.”

Competing in the worldwide FIRST Robotics Organization is one of those opportunities. Students travel and compete against students with different social, economic and educational backgrounds.

Bissell recalled watching students of different nationalities work to overcome language barriers in order to succeed together at tournaments.

“Watching our students be so willing to go out of their way to help another team was incredible,” Bissell said. “A Chinese student from Harding Academy spent a lot of time helping a team from China because of his unique connection.”

Tournaments such as the Ozark Mountain Brawl give students an opportunity to take their knowledge outside the classroom. Jones believes that competitions are instrumental to this learning process.

“We take our lectures and class times and teachings and put it into action,” Jones said. “The kids learn. What we’re doing at the tournament is what the future needs to be.”

Director of sponsored programs Brad Miller, often serves as lead judge at robotics competitions. His position gives him the unique ability to observe the students at work and examine the benefits of participating in robotics.

“When teachers teach in a classroom, it’s inevitable they give closed-ended problems,” Miller said. “What’s good about the competition is the fact that it’s an open-ended, real-world design challenge…They’re learning by experience.”

According to the Harding Academy website, 12.5 percent of its students participate in the Breakaway robotics team. Since its inception in 2011, Breakaway has received three Regional Champion titles, and according to Jones, will only get better in the future.

“We make mistakes along with way,” Jones said. “ But all of the mistakes lead to our successes. We see every failure as a step closer to getting where we want to be.”