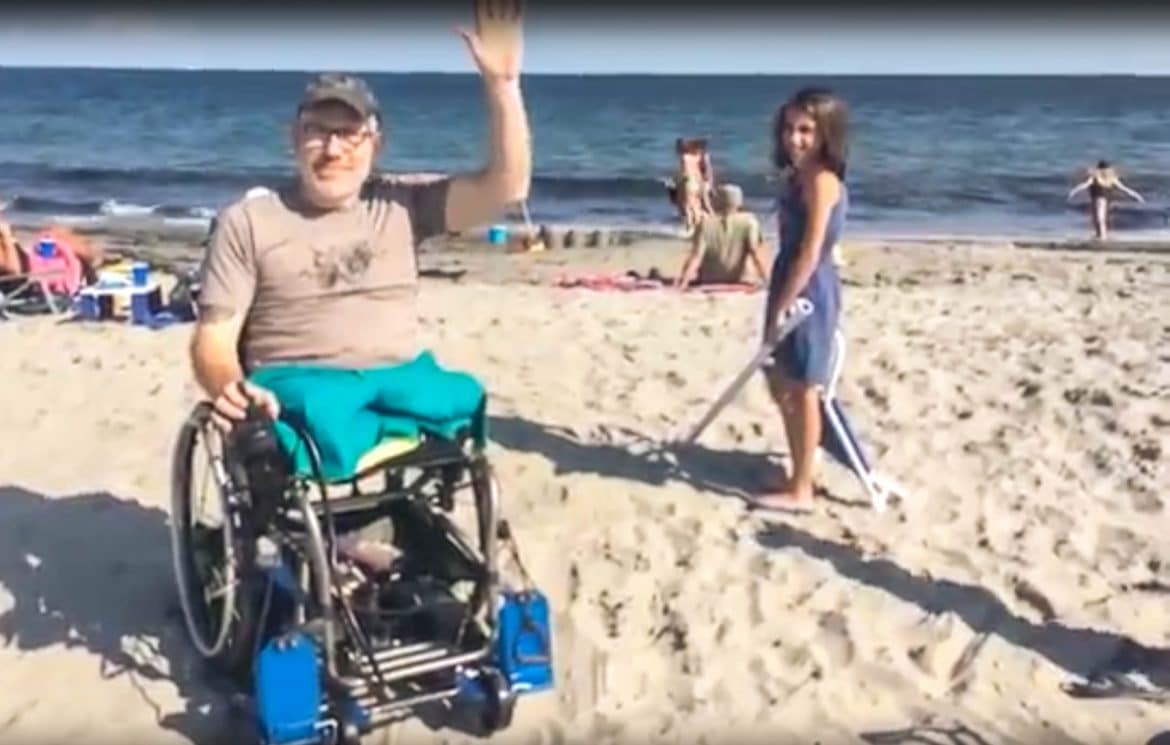 Knights sponsor graphic designer for the office of public relations and marketing Tim Cox poses with his family on the beach after receiving Freedom Trax. Freedom Trax is a motorized wheelchair attachment designed for off-road traveling. Photo Courtesy of Tim Cox

According to Tim Cox, a former sponsor of men’s social club, Knights, and graphic designer for the office of public relations and marketing at Harding, using a wheel chair presents many challenges. One such challenge is traveling on uneven terrains, such as sand.

Tim Cox explained that this new technology is not a wheelchair itself, but rather it works in tandem with a manual wheelchair. When the wheel chair is rolled over the Trax system, it attaches to the wheels and allows the user to travel on terrain that was previously impossible, such as snow or sand.

When Jordan Whetstone, a Knight’s alumnus, saw Tim Cox’s post, he decided that his former sponsor and mentor deserved to live life with more freedom.

“I was looking at pictures with Tim and his family, and thought about how I walk around so freely,” Whetstone said. “I wanted Tim to have the same freedom to not have to be so mindful of where he goes with his kids.”

The same day Whetstone posted a GoFundMe page to raise money to get this new technology.

“As soon as I proposed the idea, it was taken very well,” Whetstone said. “A lot of former Knights had Tim Cox as their Sage (sponsor), and this to them was the perfect way to say thanks for the many years of being a positive influence on the men of Knights.”

Whetstone raised a total of $8,800 through his GoFundMe, which was more than the $5,800 needed to buy the Freedom Trax. With the extra money, Whetstone gifted the Cox family with a stair climber that was installed in their Rhode Island home.

Erin Cox, Tim’s wife, was overwhelmed with emotions when she found out about the GoFundMe campaign.

“We were shocked, filled with gratitude and humbled,” Erin Cox said.

The motto of Knights is “God, Others, Self,” and Tim Cox believed they lived out this mantra when gifting him the wheel chair.

“I was overwhelmed at their generosity and the kind things he said about why they wanted to do it,” Tim Cox said. “I have seen Knights do amazing things by serving others over the years and unexpectedly I now got to be the recipient of that service.”

According to Erin Cox, the first stop the family made with Freedom Trax was a trip to the beach.

“Tim took his maiden voyage on the Trax to Narragansett Beach,” Erin Cox said. “Sounds simple enough for you and me, but since being in the wheelchair in his teens, Tim has never been to the beach. It just was not a possibility for him. And if you know him, you know he’s not one to indulge in self-pity – he is determined to show all who meet him that having a physical disability does not mean you have to live a ‘less-than’ life.”

“Watching him go out on that beach so close to our new home in Rhode Island with our kids running circles around him in the sand for the first time was the definition of joyful,” Erin Cox said. “It was literally life-changing for him, and for us as a family, because now the beach is our happy place.”