Home Features Teaching the Bible from a Woman’s Perspective 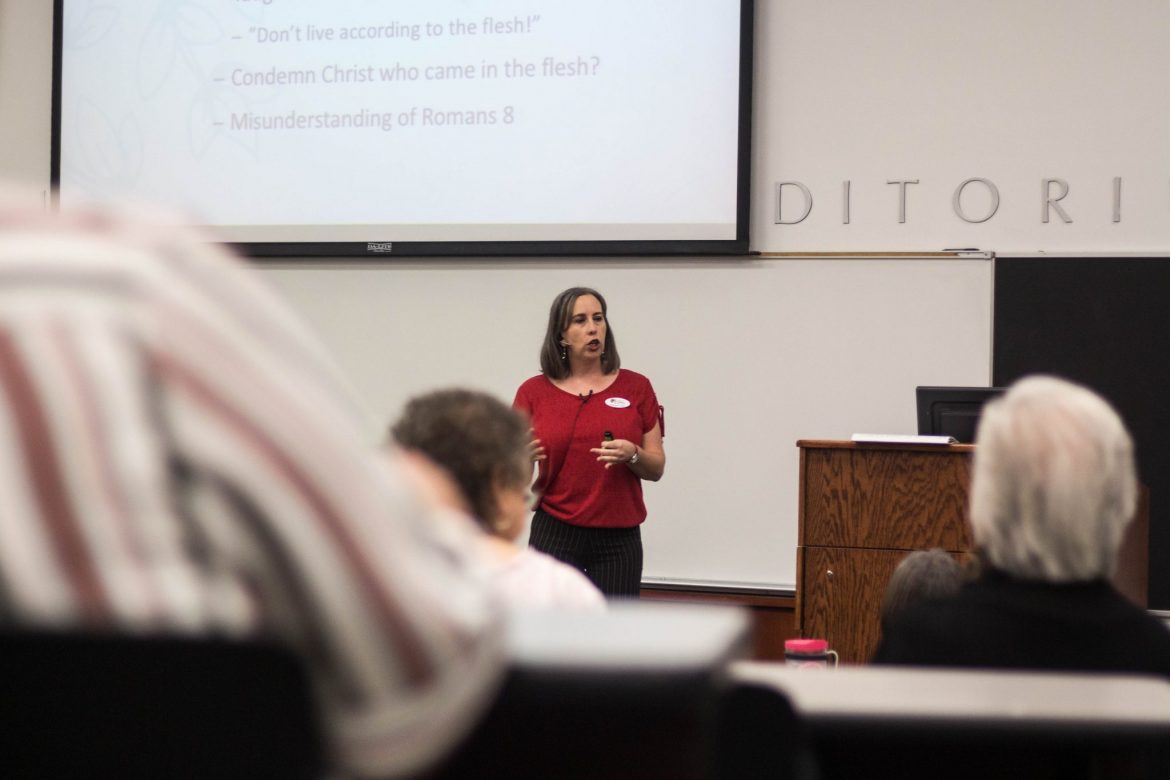 “After my freshman year, I went with Ava Conley and the foreign language department to Venezuela on a campaign for a month, and I was hooked,” alumna Michelle J. Goff said. “I realized what it meant to allow the spirit to work in and through you, especially in another language.”

Goff was a student at Harding from 1995-97 and double-majored in communication disorders and Spanish. Goff said she was very active on campus and in her social club, and was also a resident assistant for three years. It was also during this time that Goff got her first serious look at international missions.

“I lived and breathed everything Harding for those four years,” Goff said. “Even though my bachelor’s was in communication disorders and Spanish, God was really calling me more directly into the ministry route.”

Since graduating from Harding, Goff has spent her entire career working in full-time ministry. Goff has been a part of church plants, women’s ministry and missions, including work in Central and South America, Russia and Kazakhstan. She also worked in campus ministry at Louisiana State University, where she got her master’s degree.

“Being in full-time ministry for all those years in all those different contexts, I was seeing a huge need for resources and materials for women’s ministry,” Goff said. “There was not really anything that was equipping women to kind of take that next step in leadership and in their own spiritual growth, especially within the Churches of Christ.”

Thus, Goff founded a ministry of her own to do just that. Iron Rose Sister Ministries, according to Goff, allowed her to write and publish women’s Bible study materials that are designed to be easy enough for anyone to lead but deep enough for everyone to grow. Because of her love for the Spanish language and Latin culture, Goff also wanted to include study materials in Spanish as a part of the ministry.

“I like to meet women where they are and walk with them one step closer to the father,” Goff said. “We are an equipping ministry, and we serve to encourage and inspire women.”

Iron Rose Sisters began in 2013, and has since grown to work with women in all 19 Spanish-speaking countries of Latin America and over half of the 50 states. Goff said the name of the ministry symbolizes Christian sisters who can be like iron sharpening iron and who can encourage one another to be as beautiful as a rose in spite of a few thorns.

Along with creating study materials, Iron Rose Sisters travels to put on seminars, conferences and retreats for women, which can be English-only, Spanish-only or bilingual. Goff said she wants to help create a bridge for both of these groups in a church setting.

Goff spoke Tuesday, Sept. 26 as a part of the 2017 Lectureship. Her lesson, “What do I do with my human nature?” focused on Romans 8 and the difference between human and sinful natures. However, this was not Goff’s first time to teach at Lectureship.

It was one year ago at 2016 Lectureship when senior Mackenzie Lancaster first met Goff. A Spanish major herself, Lancaster decided to attend Goff ’s lecture on ministering to Christian Latina sisters. The two realized they shared many of the same passions, and Goff in December of 2016 asked Lancaster to be her intern for Iron Rose Sisters for the following summer.

Lancaster was able to travel with Goff around Arkansas, the U.S. and even Peru and Chile for campaigns, seminars and conferences, and missionary support, providing her more experience in Spanish and a new outlook on mission work. Lancaster said she hopes to stay involved in the ministry in the future.

“I’m very passionate about women and their faith, and I’ve constantly been trying to figure out my place,” Lancaster said. “That’s one cool thing I learned this summer: Michelle teaches women how to read the Bible from a woman’s perspective, since they’re almost always taught by men. She’s a very encouraging woman, and she pours out so much of herself into other people.”

As Iron Rose Sisters expands in the coming years, Goff said she aims to reach and encourage more women and continue to build bridges all over the world.

“We want to continue to grow and inspire and equip women in their relationships with God and with one another,” Goff said.